How Liquid Fits Into The Bitcoin Ecosystem

Home » Articles » How Liquid Fits Into The Bitcoin Ecosystem 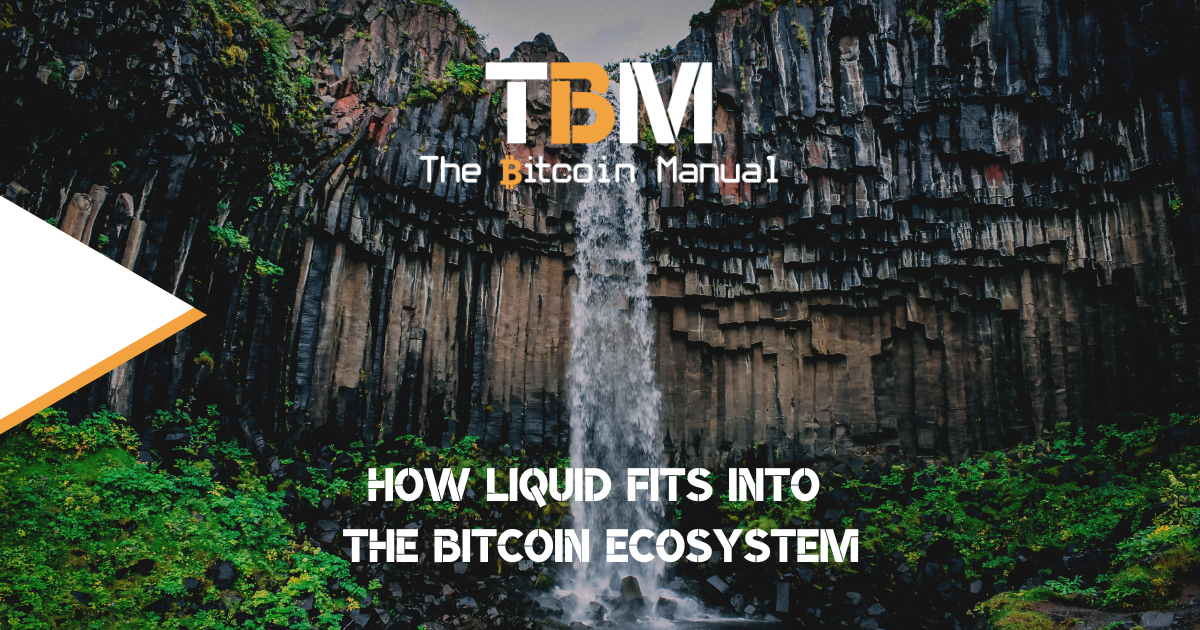 The Liquid Network is often dismissed by many bitcoiners due to its consensus method, it is a distributed federated system run by several corporations who have the final say on bitcoin pegged in, and bitcoin pegged out of its network. It was initially created to help offload transactions from the base chain and make it easier for arbitrage traders to move bitcoin between exchanges.

It later launched synthetic assets like L-USDT and L-CAD. These stablecoins allowed for on-chain trading, while securities like the BMN (Blockstream Mining Note), a token that represents a claim on mining hash rate, provided an example for issuing regulated securities on the network. The Liquid network makes a host of trade-offs that might not sit well with the hardcore bitcoiner but for the trader, the niche becomes a lot more attractive.

As for the average retail user owning L-BTC or interacting with this side-chain, the Liquid Network faces a few issues; it is not adopted by most exchanges, it is not integrated into many hardware wallets or software wallets and there is still a massive education drive into how some people can benefit from exposure to the Liquid Network.

This side chain is often related to being the ugly step-sister of bitcoin, but in this post, we’ll examine a possible future for Liquid and why it still may have a niche where it would become the preferred method of settlement.

Currently, bitcoin-based assets aren’t a popular investment vehicle,e but as bitcoin continues to gobble up the monetary premium from other asset classes and fiat becomes unattractive to settle in, it could become a more attractive market. If bitcoin is the base money of the bitcoin economy, it will be a popular settlement method for bitcoin-based financial products.

In the future, we could see the issuing of assets like:

That could all be traded on the various exchanges that adopt the Liquid as a settlement network or by DEX protocols that are built on top of the Liquid Network. Since the network offers clearing times of 1 minute and lower fees than the base chain while being able to lock up as much bitcoin as demanded, it becomes an attractive network to settle large transactions in bitcoin. Coupling the fact that Liquid has confidential transactions makes it a better method for settling larger trades.

Depending on the risk appetite for traders, we might see more creative uses for synthetic assets like access to early-stage capital in bitcoin businesses. EFT’s based on mining, ETFs compromising of exchanges, and so much more.

Demand to lock up bitcoin

To clear all the assets I meant above, you will need a base currency that is liquid to transfer in and out of, as well as pay the fees to transfer ownership of these claims to securities running on Liquid. This means more bitcoin needs to be locked into the Liquid Network to provide liquidity to settle transactions.

The more synthetic assets and registered securities moving on the Liquid rails, the more demand to lock up bitcoin for fees and as a trading pair, as well as building up treasuries to settle redemptions for things like dividends and coupon payments in the case of bonds and equities running on Liquid.

The Liquid Network could also attract bitcoin to be locked in as applications, securities, and other opportunities provide a risk-on environment to generate a yield. Additionally, if Lightning channels are established via Liquid Bitcoin, it can also pull in bitcoin to provide liquidity for routing Lightning payments and settle back to Liquid at a later stage.

Since bitcoin still has so much potential upside from its current monetisation stage, the risk-reward of using Liquid and any yield-generating applications that can and will be built on it might not get initial demand right now. Still, as bitcoins CAGR continues to drop over time, you might see more bitcoin tempered out of cold storage or base-chain holdings to be moved to Liquid for speculative and investment purposes.

Bitcoin has many P2P trading platforms available right now, but none provide that instant settlement optionality that on-chain smart contracts with automatic market makers can provide. I don’t like the term DEX or decentralised exchange because it’s not decentralised and gives off the idea that this is a trustless exchange when it’s not.

You are making trust assumptions on the part of the smart contract, the platform, the custody of bitcoin on Liquid and the counter-parties you engage with when making a trade.

Anyway, back to my point, using the Liquid Network and its ability to create synthetic assets through its AMP protocol, it may become an environment where more open trading platforms that only use a wallet as an authenticator will reside, as we see with the Marina wallet.

There could be trading platforms that only deal with “whitelisted” wallets and “registered securities” issued on-chain. At the same time, there is also space for more wild cat banking where assets are created using bitcoin as collateral as in the case of Fuji money or registered securities that carry more risk, such as ETFs representing a basket of exposure to various sectors or investment stages of bitcoin companies.

The reason I say bitcoin companies is because it will most likely be these bitcoin-focused companies that take the lead on these products. As they benefit from easier access to capital, non-bitcoin companies might want to follow their lead.

Since Liquid is pegged as a scaling solution for bitcoin and is often confused as a project that competes with the Lightning network, that is not the case. The Liquid Network being a fork of bitcoin and a side-chain means that in the eyes of the Lightning network, it’s still the bitcoin blockchain. Lightning is a blockchain agnostic protocol and can run on other chains. Still, for it to be effective and remain decentralised, it requires a robust network below it to provide the support, which is why it’s an ideal layer for bitcoin.

Since Liquid is an extension of the bitcoin blockchain and abides by the supply of tokens pegged in from the base chain, it is, therefore, possible to create Lightning channels established by locking L-BTC into hashed time lock contracts and then spending that locked bitcoin inside the Lightning network.

While creating channels on the base chain isn’t too much of a hassle in terms of operation and cost, as more users come on board and competition for block space increases, the ability for Liquid Bitcoin to open channels will become much more attractive.

Lightning node operators can then look at what network would be better to open and close channels on to reduce cost and be more efficient with their capital use. You could have Lightning nodes that offer both base and liquid chain support or ones focusing solely on one chain depending on the demand for capital and the need for block space offsetting from the base chain.

Creating channels from the Liquid Network would also allow for interesting options like easier swaps between assets on Liquid and Bitcoin on Lightning.

Have you gone Liquid?

South African bitcoin pleb falling down the rabbit hole and willing to share every bump, scratch and knock along the way
View more articles from this author
PrevPreviousBitcoin App: Slice
NextIs Bitcoin Really An Inflation Hedge?Next