What Is A Confidential Transaction on Bitcoin

Home » Articles » What Is A Confidential Transaction on Bitcoin 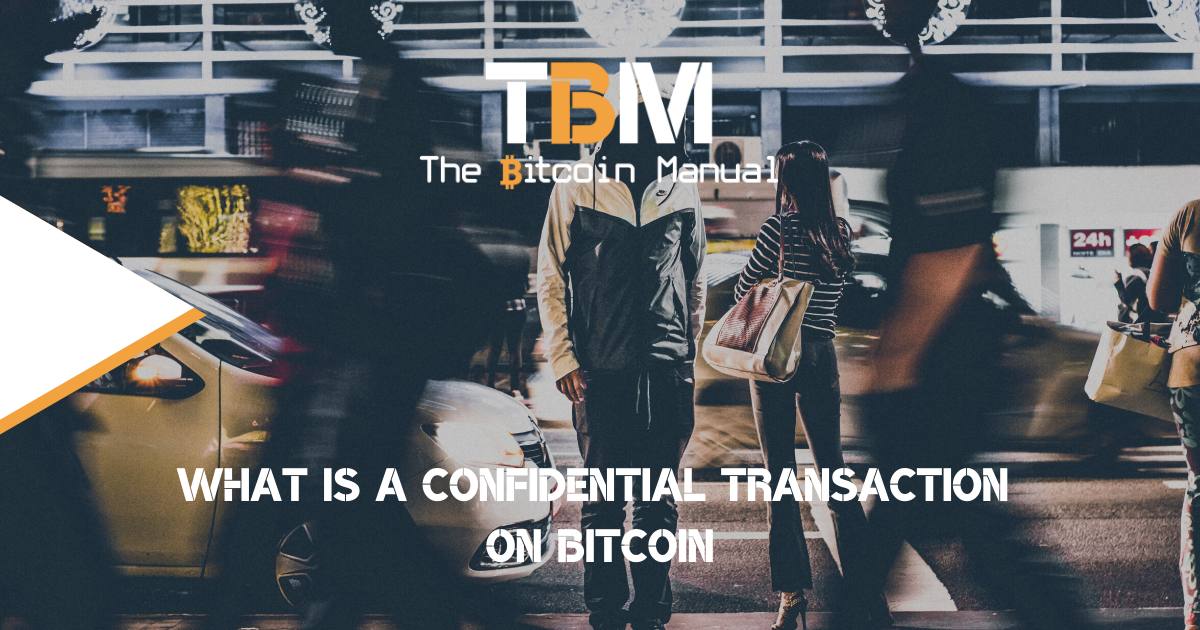 If you’ve used Bitcoin before, you may be familiar with its pseudonymous nature of transacting on-chain. For those of you who aren’t so wise to the workings of Bitcoin, you need to understand the limitations of having an open public ledger that anyone can verify.

Every transaction on the Bitcoin blockchain consists of a sending address, receive address, and the amount of Bitcoin sent. While your name isn’t explicitly added to the chain, it only takes a few privacy mistakes for someone to link a wallet address to you.

Once they’ve done this, they can follow the trail of transactions you perform, which can be a massive privacy risk. Sure, you can use best practices like generating a new address or using a CoinJoin service, but most new Bitcoiners aren’t aware that these exist.

Practising Bitcoin privacy can also be a pain; it’s easy to get lazy or slip up. So having privacy as the default has been a discussion floating around for years now. One of these privacy solutions is the concept known as confidential transactions.

What is a confidential transaction?

The TLDR of Confidential transactions (CT) is a cryptographic protocol that results in the amount value of a transaction being encrypted/hidden from a 3rd party view. The CT encryption provides an added level of privacy and makes it possible to verify that no bitcoins can be created or destroyed within a transaction. CT’s would be verifiable on the chain; anyone would be able to see transfers between wallets, but without revealing the exact transaction amounts.

Confidential transactions are not live on the Bitcoin mainchain and require a soft fork consensus change to be added to bitcoin, although they could be added to a sidechain too, like the implementation currently on the Liquid Network.

Why do we need confidentiality?

As the Bitcoin network grows, so does the personal wealth of individuals on the chain; this could make you a target should you be public or make your holdings public by accident. In addition, governments could target wealthy Bitcoiners, while chain analysis companies could extract data that could be used to target you or subsets of users like you.

On-chain data has also been used to shape certain narratives, while traders would not want their positions revealed, especially when arbitraging between exchanges.

Much of the focus on adding privacy to Bitcoin is currently centred around ‘breaking the chain’ – that is to say, making it difficult to link transactions together. Confidential Transactions CTs, or rather the general idea of which was proposed by Adam Back on BitcoinTalk in 2013 and this paper.

The issue with adding this to the Bitcoin mainchain is down to resources, as the size of a Confidential Transaction is roughly 3x the size of a regular one, while addresses are twice as large. The more significant transactions naturally see validation cost spikes making it more expensive to use the base chain as people complete for limited block space every 10 minutes.

NOt only that, but the more data we add to the main chain, the harder it becomes to run a node, which may push lower-end hardware into retirement and limit the decentralisation of node distribution, which is fundamental to Bitcoin.

The friction of adding CT’s to the main chain hasn’t stopped the upgrade from going ahead on side chains, and CT’s are available on the liquid network.

How to use a confidential transaction on Liquid.

Adam Back, who we spoke about earlier, is the CEO of Blockstream, so it would only be natural that he’d push for having CT’s on the side chain they helped federate. By default, all Liquid transactions use Confidential Transactions.

This cryptographic protocol hides both the type of assets and amounts transacted to any third parties monitoring the Liquid blockchain. Confidential Transactions achieve this while ensuring that other Liquid users can verify the accuracy of the transaction amount, the involved wallet balances, and the total supply of the asset involved in the transaction.

As a result, most transactions on the Liquid blockchain look very similar, as seen on Blockstream’s Liquid Explorer, the side chains own block explorer service.

Note: You will have to peg your BTC into L-BTC on the Liquid side-chain and use a compatible Liquid wallet and Liquid exchanges to make use of these features.

What data is still visible on Liquid?

While Confidential Transactions hide specific details of a transaction on Liquid, they don’t hide everything. Like on the Bitcoin blockchain, all transactions can be viewed via their transaction ID.

The addresses of senders and receivers further remain visible and can be retraced like on the Bitcoin blockchain.

However, the fees paid for a transaction are also publicly viewable.

Who can see transaction data?

Only the parties involved in a transaction, as well as users with the blinding key of a transaction, can see the asset type and amount transacted. Nobody else can see those details. Not even Liquid members or functionaries can break the cryptography of Liquid’s Confidential Transactions.

As a result, Liquid users can transact in private while maintaining the ability to share details of their dealings with third parties, for example, an auditor or regulator.

Keep your wealth to yourself.

If you do plan on saving a considerable amount of wealth into Bitcoin, or you’ve found yourself sitting on a large amount due to early stacking. Then you’ll realise why learning why it’s important to practice privacy when moving, consolidating or distributing your funds.

Confidential transactions aren’t ideal for everyone and require some expertise to move over to Liquid and jump back to the main chain, but it is an option should you need it. This is only the beginning, and future privacy options are coming with the help of lightning, taproot and batched transactions.

So fret not if this is a bit out of your comfort zone; options are coming that may be more your speed, but they will require you to do the work to maintain your privacy.

I hope you keep every sat you stack safe and sound and don’t dox yourself if you can help it.

PrevPreviousBitcoin is NOT A Stock
NextWhy You Should Avoid Clickbait ContentNext