Bitcoin is NOT A Stock

Home » Articles » Bitcoin is NOT A Stock 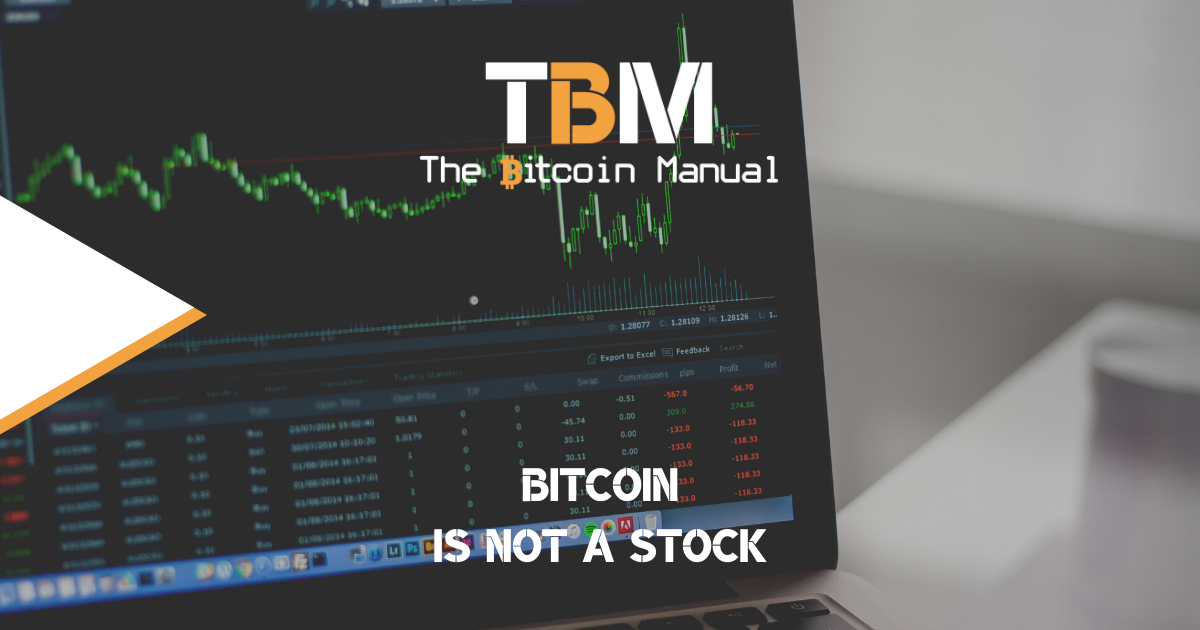 I don’t know who needs to hear this, but the TLDR of this article is, BITCOIN IS NOT A STOCK or stonks, as some prefer to call it. There, I saved you a few minutes of reading so you can go back to resharing memes and watching awful dancing on Tiktok, am I right? Yes, that’s who I assume the demographic is for people who think Bitcoin is a stock.

The laziest of the lazy, it doesn’t even take that much research; if anything, it should be pretty obvious, yet it’s become a common misconception among nominees and new market participants.

Killing these misunderstandings before they spread is why Bitcoin education is so important.

Why do people think Bitcoin is a stock?

Apart from sheer laziness, many people assume Bitcoin is a stock due to its price activity which can correlate with traditional markets on occasion; it is, in fact, an entirely separate asset class. Bitcoin’s volatility is something that seems foreign to those who have a perception of currency.

The forex market is one of the most liquid markets globally, so daily price changes are marginal, whereas, with Bitcoin, it can move significant percentage points either way within 24 hours. These price movements give the impression that it is highly speculative, and it gets lumped in with stocks by the untrained eye.

Another reason could be that Bitcoin is traded on popular fintech platforms alongside stocks, and many even market their service as “trade Bitcoin and stocks”. Since many of these apps are custodial, the user interface and experience seems no different when trading Bitcoin or stocks and thus, assumptions can be made if you’re not doing any research on what you’re trading/owning/buying.

Finally, the idea of cryptocurrency is not something people understand, so they lump it with other digital tech brands and famous startups like Facebook and Google. These tech stocks make sense to users; it’s a product they use every day, and Bitcoin is “probably” another up and coming tech startup.

Bitcoin is a digital asset and currency.

So what the bloody hell is Bitcoin if it’s not stock in a company? Bitcoin is a cryptocurrency – a type of digital asset secured by cryptography that can be used to make electronic payments. As a digitally native asset, it can be transmitted to anyone in seconds over the internet over the internet or, due to its scarcity and difficulty to create, it can act as a store of value like gold or silver.

Fiat currencies like the U.S dollar or Euro store all card and wire transactions on a central ledger. This is done with the help of institutions such as a bank to maintain and record the balances of each account.

While bitcoin uses a technology called “blockchain.” This is a globally distributed ledger that can be maintained and copied by anyone on the planet and ensures total immutability and transparency. Anyone can run a copy of the ledger and help support the network by running a software known as a node.

What are the attributes of a stock?

What are the attributes of Bitcoin?

Company stocks used as a proxy for Bitcoin

Despite the differences between these two investment options, there are many ways in which the two overlap. As Bitcoin’s market cap continues to grow, it allows for more liquidity, and some publicly traded companies have begun to gather Bitcoin, be it for operational use or for long term storage of cash reserves.

Since they are public companies, they have to disclose their Bitcoin holdings and therefore, these stocks are tied to the performance of bitcoin.

These companies are either directly engaged in bitcoin-related activities such as mining, or they hold a substantial amount of bitcoin in reserves.

This generally means that when bitcoin’s price is performing well, these stocks also tend to perform well, and vice versa. If you aren’t keen on holding bitcoin but are comfortable with stocks, then these companies are another way of getting Bitcoin exposure via the traditional markets.

So why would companies own Bitcoin if they’re not mining it? For the same reason, you, as an individual, want to own Bitcoin. It’s the ability to protect the value and appreciate over time. As individuals with savings that erode through inflation, so too do companies with retained earnings. They cannot sit on large sums of fiat money that loses value each year; if they don’t plan to reinvest all the capital immediately, they need a way to store its value long term.

Traditionally this was done with gold bonds and even holding stocks of other companies. Still, Bitcoin has proven to be a superior trade for those companies who have adopted the Bitcoin standard.

There is no Bitcoin company, no Bitcoin board of directors; it is merely people worldwide coordinating to keep the network going in a decentralised manner.

I hope this helps clear up any confusion you may have had in the past and wish you happy stacking if you choose to own BTC.