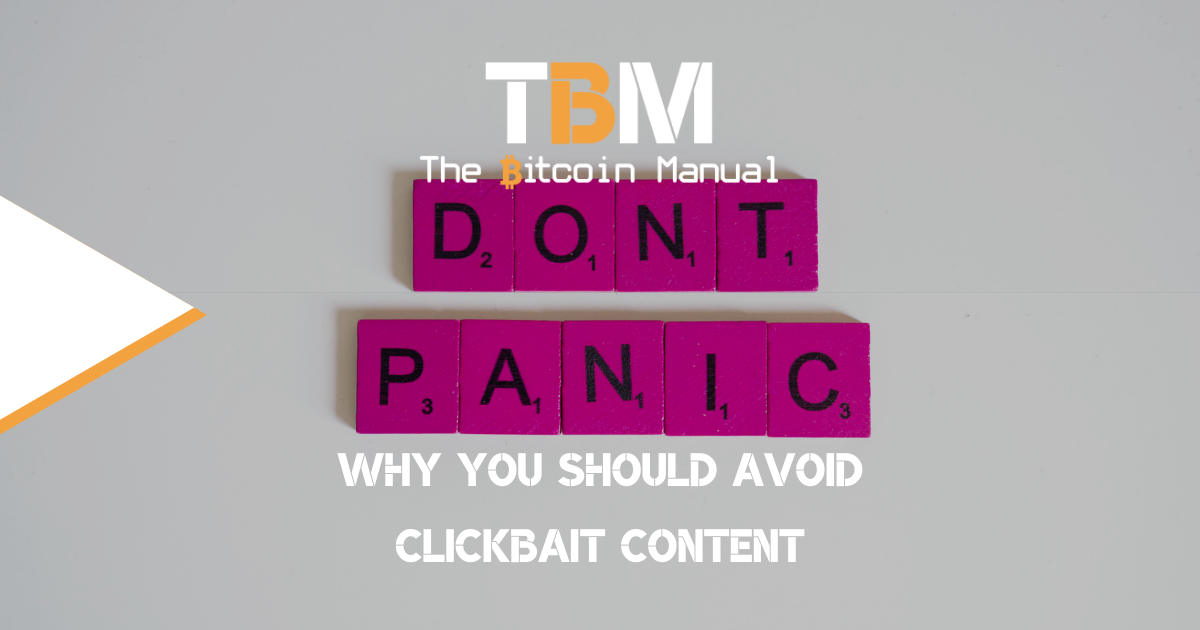 If you’ve been in Bitcoin for any length of time, chances are you saw some clickbait content that made you feel FOMO (Fear Of Missing Out) and dive right in without doing any research.

You know the kind of content I mean. Those YouTube videos with a million exclamation marks in the title and a shocked face thumbnail. Or some headline on an article that gets the blood pumping and makes you want to click on it for the full effect.

The problem with this is that it’s a really bad way of going about, well, just about anything really!

Lest we forget the FUD (Fear, Uncertainty, Doubt) circulating around toilet paper, pasta and flour with the pandemic in 2020 and in more recent times, petrol in the UK (seriously…). The resulting effects from the clickbait headlines caused people to panic and do something they wouldn’t think about doing normally.

These same FUD principles can be seen in headlines relating to Bitcoin with content creators, YouTubers and media outlets all jumping on the bandwagon. In this world of clicks and cookie cutter engagements aiming to grab your attention, emotions run high and stupid decisions are made.

It’s very difficult to cut the wheat from the chaff when you’re new to this and you’re in a heightened FOMO state but knowing what signs to look for can help.

What I notice when there’s a news story breaking is a load of articles appearing in the crypto news outlets all saying the same thing. Usually a ban in China (this comes up more often than not) but other things include energy usage. We even had some nonsense around “double-spending” earlier in 2021!

What then happens is this filters through to Twitter and YouTube as all the “influencers” and content creators have relevant topics to talk about. That’s when all these exclamation marks and end of the world headlines start surfacing.

Then of course you have all the shitcoin moonboys and moongirls trying to tell you that XYZ coin is going to the moon and you can get rich quick. Watch out for these snake oil salespeople and don’t fall for their traps – do your own research!

When I first got in to Bitcoin at the end of 2017, I fell in to all these traps because I didn’t know any better. I lost a lot to shitcoins, was sucked in by the FUD and I filled the shillers bags. It feels like this is part of the learning process when you join any investment, let alone one as nascent as Bitcoin (and the shitcoin) industry.

There comes a time when you either say enough is enough and you back out, likely taking a lot of losses and feeling burned by the experience. Or you stick around, learn from your mistakes and carry on exploring.

I’ve found that the more you immerse yourself in this space, understand how money and Bitcoin works in general, you become almost immune to the emotion that these clickbait con artists try to instill in you.

This is because you have equipped yourself with the knowledge of how the technology works. Money is a technology after all.

Not only that but once you understand it, you start thinking opposite to what many others are feeling. Instead of panicking, you’re being greedy and wanting to get more sats on the cheap or holding if you don’t have any dry powder.

It’s remarkably calming when you know the game and are in control of your emotions. Don’t let them take your Bitcoin that you’ve worked hard for and be wary of clickbait content!