Why Dollar Cost Averaging Is Critical For Fiat Miners 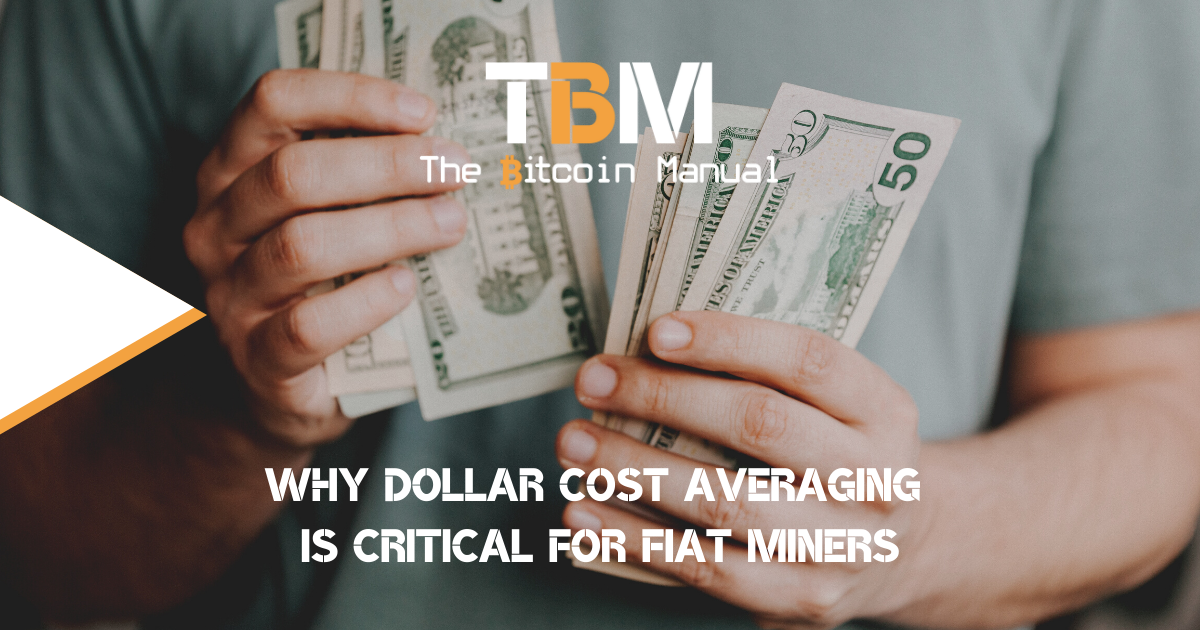 Getting into Bitcoin forces you to question a lot of the fiat practices we’ve accepted as the norm, but if you’ve had a quick look at monetary history, you’ll quickly realise that the fiat system is not the norm but a momentary lapse in human history.

Since I started working ten years ago, I’ve received a monthly paycheque; I’ve settled my bills, portioned some income for spending and put aside the rest for my future.

It’s a routine we’ve all become used to but have you ever thought about why we get paid every month? We work every day for 8 hours, producing goods and services, so why are we only rewarded 12 times a year on average?

Being paid monthly has become so commonplace over such a long period that it’s easy to assume it was always the norm. But that isn’t necessarily the case: in developed economies, workers were still paid daily as recently as the 1950s.

There are many reasons why monthly pay became so popular, and most of it is the result of centralisation and the rent-seeking and cost of bullshit jobs we find in the fiat economy. The motivation for monthly payments are paraded as reduced administration for payroll teams, greater predictability of cash flow, reduced payroll costs, and later on, the efficiencies found in running payroll digitally.

For those receiving their wages, being paid monthly can be more of a hindrance than a help. Unexpected expenses often don’t coincide with paydays, leaving people reliant on expensive credit to cover surprise bills, driving up your use and cost to capital. The motivation of monthly salaries is actually to make you more reliant on credit which is profitable for banks and financial institutions.

On top of that, general budgeting for regular costs can be more challenging to manage, mainly when people are influenced by a ‘payday millionaire’ culture, where they splash out as soon as they’re paid and then struggle to make ends meet for the rest of the month.

Having a monthly salary also means you may miss out on specific investment opportunities. Let’s say a stock or product has a temporary dip in price. If you were paid each day, you could easily take advantage of these inefficiencies in the market and profit. Instead, you are stuck waiting to deploy your capital once a month.

There have been attempts to bring back the idea of payment upon completion of work thanks to technology. Instead of calling it income, the tech buzzword of the day is now Earned Wage Access (EWA).

Earned Wage Access is a way of giving employees more flexibility and choice in how and when they are paid. Instead of being paid at fixed intervals defined in their employment contract, their wages are accrued on a day-by-day basis within an EWA solution, which they can then access and withdraw to their bank account whenever they need or want to.

While this is a helpful solution, very few companies are using it, and why would they? What’s in it for them?

The opportunity cost losses of a monthly salary.

Call me crazy, but I think that a monthly payment deprives us of many opportunities that cannot be accounted for because we’ve never considered them in the first place. When you have to wait once a month to acquire capital to deploy, you force a particular time preference on yourself and make irrational decisions.

Have you ever been to a mall during a pay week/end of the month? It’s usually packed with shoppers looking to secure groceries and other goods from the currently available stock. Retail stores realise this and actively play into these trends to increase average basket orders and get you to purchase things you don’t need because they are “cheap” or on special.

When you have your discretionary income on hand, you are more likely to deploy it impulsively because it’s seen as a reward or a treat. The fiat system treats us as irresponsible capital allocators by default. We can only access our productivity once a month. We’re handed our bowl of gruel from the monetary stockpile and then told to make it last until the next month.

We are getting caught in the cycles of spending.

This, to me, is absurd; it creates a cycle of impulsive buying and an imbalance of scarcity. Suppose everyone is competing for the same goods and services around the same time of the month. Retailers can control pricing as the urgency to purchase makes people price agnostic if they need a particular product or service.

This irrational spending and a false sense of scarcity mean you deploy your capital improperly. This creates dependence on your employer; you remain subservient because you’re in a constant state of overspending from poor capital allocation.

You’re probably greeted with empty stores where you can shop at your leisure; prices are more reasonable as YOU are now the one they need to convince to part with your capital. It allows you to make more rational decisions without urgency, and you can often spend less or spend more effectively.

So, where does dollar cost averaging come into play?

Now that you’re aware of the issue with a monthly salary, how can you solve the situation as an individual fiat miner? Since very few of us have the luxury to have EWA, we need to learn to create one for ourselves. It all starts by creating a buffer by saving some of your cash each month and making it a habit to save as much capital.

Once you get into the habit of building up a confident kitty each month, you now sit with the problem of your savings being a melting ice cube due to inflation.

This is where Bitcoin comes in.

Bitcoin will swing in USD (for fiat currency of your choice), and instead of jumping in once a month where you are exposed to one price point, you could instead dive in each day and dollar cost average. Instead of falling for the urgency of particular price or the price when you are paid, you can accumulate Bitcoin at various price points as it fluctuates with market demand.

As you become more confident, you can also learn to set limit order buys for specific price points, which can further help you reduce your cost for acquiring Bitcoin.

The cheaper you can acquire Bitcoin in the short and medium-term, the more purchasing power you can preserve over the long term as Bitcoin’s price appreciation increases with time.

The more consistent you are at dollar-cost averaging (DCA), the better your chance of catching inefficiencies in the market. While you can focus on your work, you can set up these DCA purchases as you learn to deploy your fiat daily to work for you.

Fiat miners like you and me need to learn to break the cycles fiat systems have designed for us if we are to maximise profit from the move to the global hard money standard Bitcoin aims to achieve.

PrevPreviousWhy You Should Avoid Clickbait Content
NextWhat Is Non-KYC Bitcoin?Next