What Is Non-KYC Bitcoin?

Home » Articles » What Is Non-KYC Bitcoin? 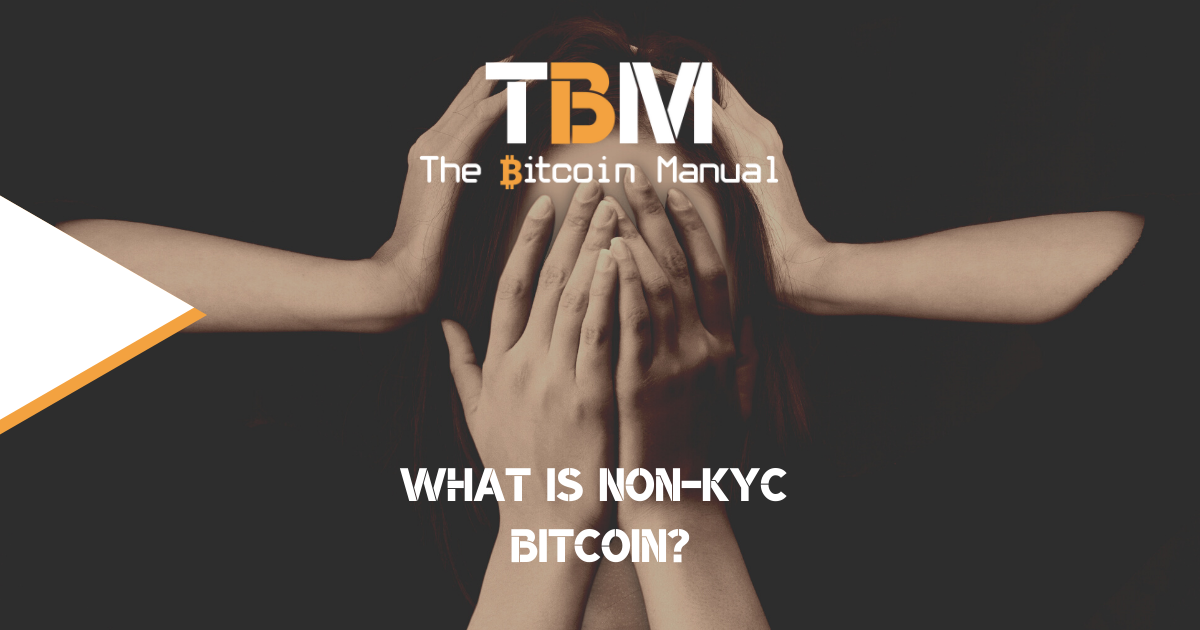 If you’ve bought some Bitcoin in the past, you probably did it via some business/website known as an exchange. You signed up, provided some identification details and then sent over fiat money from your bank account to the service. Your cash was debited to your account for you to purchase Bitcoin, or it was an instant swap, and the Bitcoin landed in your account.

Does this sound familiar to you?

Well, did you ever think about the process of acquiring Bitcoin? Don’t you find it strange that you would have to provide information like a:

What’s the big deal? I provide the same information to purchase something from any eCommerce site. Well, the big deal comes in the form of the good you’re acquiring. Buying yourself a PS5 or the new iPhone isn’t of much interest to the government as buying Bitcoin.

Yes, the data of your customer purchases are essential for banks and eCommerce sites to use to model their ads and click funnels to get you to buy more. Still, as a harmless consumer spending your fiat money, it’s hardly something concerning to the powers that run the show in your native country.

We are keeping a watchful eye on Bitcoiners.

However, buying something that is outside their control can hold value, protect you against poor monetary policy and allow you to escape certain situations and mandates makes you a possible threat, or so you’ve been told. Yes, in 2021, the act of saving money is demonised; you are an enemy of the state if you feel that you’d like to store your purchasing power for the long term instead of consuming all of it immediately and living off credit.

If you operate in a country as a money services business, you most likely have to commit to specific regulations. Now I have nothing against exchanges; they offer a valuable service. All I am saying is as a centralised entity; they are under the thumb of the government in one way or another.

In many cases, they are forced to collect this data on their users if they want to remain in operation; it’s the cost of doing business.

KYC refers to Know Your Customer and sometimes Know Your Client and is a mandatory process of identifying and verifying the client’s identity when opening an account with a money service business. In other words, banks or fintech companies need to know who you are or who you claim to be when doing business with them.

If you are flagged or do not provide the information they desire, these institutions may refuse to open an account or halt a business relationship with you.

Yes, that’s right, dox yourself or else?

Why do governments push for KYC?

KYC (Know Your Customer) is pegged as a tool for financial crime and money laundering, where customer identification is the most critical aspect. KYC is the first step to better perform in the other stages of the process.

Yes, you purchase $50 of Bitcoin needs to go through the most stringent of strategies to make sure you’re not money laundering your Birthday money grandmother sent you.

You are effectively pegged as guilty by association and need to submit your details and be placed on a watch list. Governments can then request this information from banks and fintech companies to find out who the Bitcoin holders are and their holdings.

What is non-KYC Bitcoin?

Non-KYC or no-KYC Bitcoin requires coins that you’ve acquired and held in an address that cannot be tied to your identity in any way, shape or form. While those reviewing the blockchain can see the amount of value in the address, they cannot who the Bitcoin came from or who owns that Bitcoin.

No KYC Bitcoin allows you to secure coins that protect your privacy as the ownership of the coins cannot be attributed to any one person.

Bitcoin regulations are on the rise.

This is not 2011; Bitcoin has become pretty famous and rather lucrative, so you can imagine that the regulations rack downs have been swift. A good part of the world knows what Bitcoin is and that crypto exchanges exist – including law enforcement and other authorities. Bitcoin sales continue to come under pressure for regulatory oversight, so it’s not easy to acquire these non-KYC BTC.

Custodial exchanges are the perfect platform for law enforcement to leverage. While your identity can be traced on most crypto exchanges from your IP, email address or reused username, your assets can only be seized from a custodial exchange (or from a bank account).

Even if you sign up on a crypto exchange that boasts not to require KYC, there is no guarantee this will not change in the future and without any warning.

You probably get by now that using non-custodial platforms goes a long way. At this stage, non-custodial trading is not new either – no need to sacrifice performance or fear bugs in the exchange code to more extent than with custodial exchange.

If you can afford a few ASICS and can set up a garage band Bitcoin mine, then this is by far the best and probably most expensive way to secure non-KYC BTC. Remember, you’re competing with industrial level operations with access to cheap electricity, so your home rig at residential prices won’t be the most cost-efficient, but if you’re committed to securing some virgin Bitcoin, then it sure is an option.

Sign up with a P2P exchange where you deal directly with another Bitcoin holder and give them cash for their Bitcoin.

If you’re a gig worker or someone who does odd jobs or freelance work, perhaps earn cash for specific tasks. You can then ask to be paid in Bitcoin. Alternatively, you could use that cash to acquire Bitcoin on a P2P exchange or from someone you know who owns Bitcoin.

Finally, you can set up a lightning routing node or convert your full Bitcoin node into a routeing node. Don’t expect to be making millions of sats overnight; the fees on lightning are pretty low, but again, it’s a way to take your sats and earn more sats.

Keep your stacking a secret.

Now there is nothing wrong with buying Bitcoin on a regulated exchange; it’s simple, easy, and works. I am not throwing any shade on the process; it’s far more accessible than a few years ago. However, if you want to keep some of your sats off the grid, it’s a good idea to acquire some non-KYC Bitcoin as part of your stack.

You never know when rules may change regarding your Bitcoin holdings or when you need to haul ass with your stack.