Why The Lightning Network Won’t Work For Other Chains 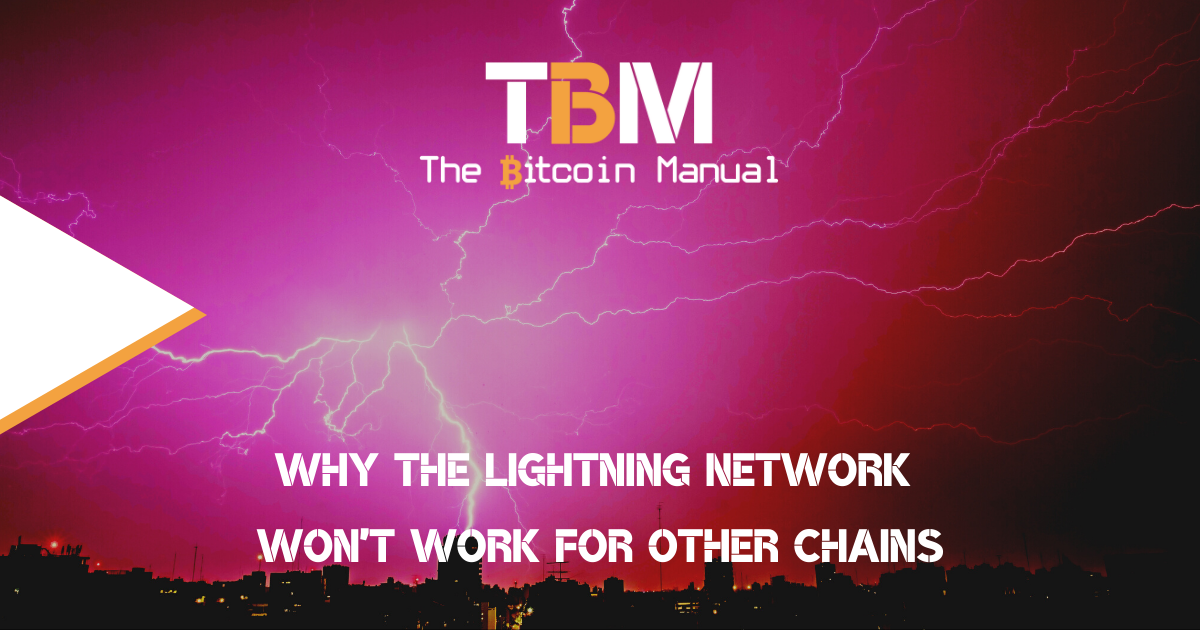 Creating a network that can successfully scale to billions of people was never going to be an easy feat to accomplish; it involves considering trade-offs such as security, speed, decentralisation, censorship resistance, and there is no perfect solution. Despite what shitcoin projects claim, there is always one element of your system that suffers when you try to increase throughput and doing it on the base layer opens you up to major vulnerabilities.

Every blockchain will claim they have better throughput in transactions per second, and bitcoin is old and slow, but they don’t mention that to achieve this, they have to centralise their network or make security trade-offs.

The Bitcoin community has sided that scaling in layers would be the better option. There are several layers extending from the bitcoin base chain, such as Liquid, State Chains, Omni, and the most popular of the bunch has to be the Lightning Network.

The bitcoin ecosystem uses the base chain as the final settlement. Still, if you require other features like cheaper transactions, you can move into environments or layers that provide you with this feature by making certain trade-offs. Once you’re done, you can always move back to the safety of the bitcoin base chain.

What does Lightning do?

The Lightning Network is an off-chain protocol aiming to solve Bitcoin’s (BTC) scalability issues. Moving transactions into off-chain payment channels are meant for smaller Bitcoin transactions, such as buying a coffee can be conducted between channel owners. This avoids the need to confirm on-chain and thus saves resources and frees up block space on the base chain.

Why Lightning is so popular

The benchmark claim for transactions to be manageable on a global level is often that of Visa, which claims to manage over 47,000 transactions per second. The Lightning Network looks to close the scale-up bitcoin to these levels.

Since the lightning network is so cheap to use and provides instant transfers, it allows people to play around with small amounts of bitcoin or rather satoshis and come up with new users for it, such as tipping, streaming money, gaming rewards and much more.

The first chain other than bitcoin to have Lightning was Litecoin since it is a fork of Bitcoin. Litecoin also had the SegWit upgrade added in 2017 that bitcoin needed and paved the way for lightning Network implementation. The lightning network has several implementations, all managed by different entities, but LND by Lightning Labs launched their protocol on Bitcoin and Litecoin.

Since Litecoin and Bitcoin share identical architecture, the Lightning Network implementation in both Bitcoin and Litecoin also enables swapping value between the two networks. There are other shitcoins that have also added lightning support, but they are not worth mentioning.

The lightning network is not a blockchain

Lightning was built with bitcoin in mind

Bitcoin’s decentralised nature comes from the running of nodes; you can run a full node or a pruned node and help validate the network. Since Bitcoin advocates for more nodes to increase the robust nature of the main chain and consensus of the rules, it provides an army of computers ready to validate the wider bitcoin network, such as off-chain transactions.

Lightning’s security model is based on watching the chain and relies on a lightning node to remain online at all times. The nodes and watchtowers have to watch the network at all times to penalise old states and keep things running smoothly.

Since running a Bitcoin node is cheap, one can do the validation themselves or accept that there are others doing it for them and choose a provider they think is a good actor. The important thing is the choice is there to do it yourself.

Scaling your base chain kills Lightning

This model does not work on other chains where they’ve opted to push massive throughput on their base chain. The larger the blocks or size of the blockchain, the fewer people who have access to resources to validate the chain. Since all other chains have chosen this path with bigger blocks more complex data sets bloating their blockchain, very few people can participate in running a full node.

In Lightning, it is a condition to monitor the chain to secure your funds. You cannot get around this. The more the cost to run a node, the more expensive the security model is, and the less redundant it becomes to use.

In a world of expensive nodes, data centre nodes or multi-million dollar nodes that are needed to run the network, you know only by a select few corporations and gigantic miners who can do the work. The way the Lightning network works forces you to trust these third parties and centralises the network.

Since you can’t afford to run a node, you’re kicked out of the elite club, you do not have any options but to trust large corporates. This defeats the purpose of a decentralised scaling solution, and the entire security model breaks down.

So sure, shitcoiners can claim that Lightning can be added to their chain, and they may be correct when it comes to adding the protocol, but as for it making sense as a real scaling solution for shitcoins, it’s completely false.

So Litecoin shills, B-Trashers, BSVtards and the rest can all pack it in; Lightning with any meaningful decentralisation is bitcoin only.