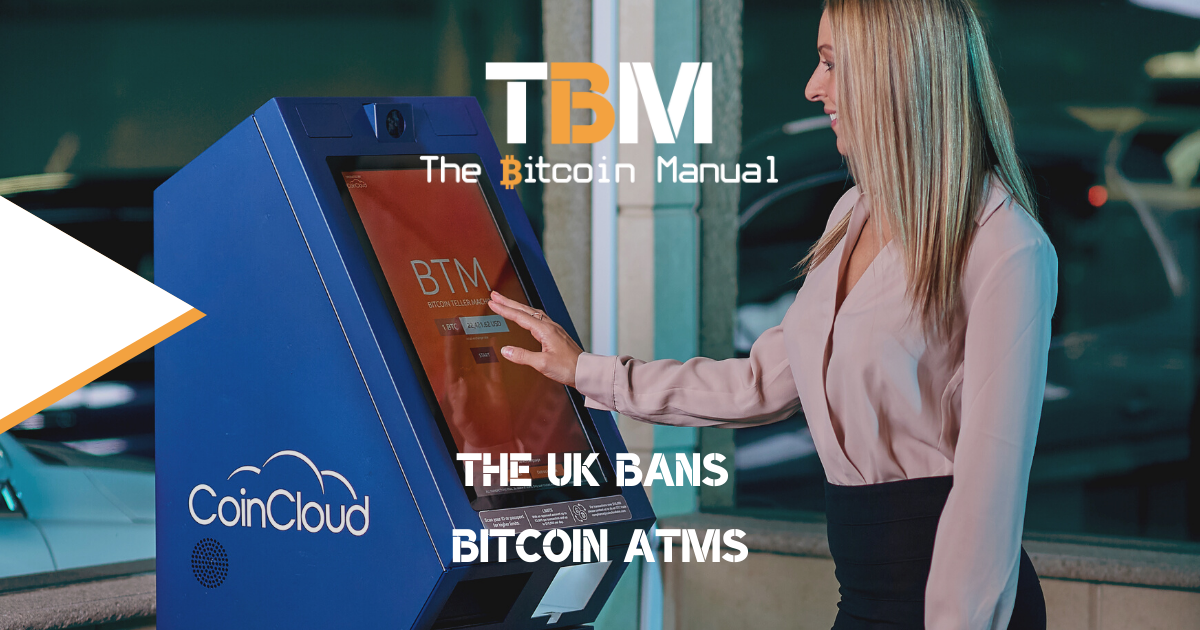 As of this week, the UK has announced that bitcoin-currency cash machines (known as Bitcoin ATMs) are operating illegally and must be shut down. The decision comes from the Financial Conduct Authority has announced.

Bitcoin-ATMs look like regular cash machines and let people buy bitcoin using cash or their bank cards. While using a bank card is convenient, it defeats the purpose of a bitcoin ATM since you don’t want to be tracked. You don’t want people to see where your cash is going, which is why physical cash to bitcoin transactions via bitcoin ATMs are so popular.

These bitcoin ATMs allow you to purchase bitcoin without providing an ID and can conclude transactions with only an email address or phone number. Instead of seeing this as a way for citizens to have some financial privacy, it’s been labelled a threat and a way to hide money for nefarious purposes.

According to the FCA, no company offering bitcoin to currency exchange services in the UK has a licence to operate a crypto-ATM. Therefore all such machines must be shut down, or it will take action.

A rather heavy-handed approach if we consider that according to the bitcoin-ATM directory Coin ATM Radar, there are 81 functional crypto-ATMs in the UK. Eighty-one pay points compared to the nearly 50 000 across the country for traditional banks; I hardly think bitcoin ATMs were about to disrupt anyone’s market or become a threat to any financial security laws.

Standard reasoning that makes no sense

“We regularly warn consumers that crypto-assets are unregulated and high-risk, which means people are doubtful to have any protection if things go wrong. People should be prepared to lose all their money if they choose to invest in them.”

These claims make no sense since there have been regulated bitcoin exchanges selling to UK customers for years. These exchanges do volumes probably 100x that of a Bitcoin ATM any day of the week. Why would it only apply to ATMs rather than exchanges, unless it was about the privacy aspect of bitcoin ATMs, this is simply a generic excuse for a crackdown.

The FCA publishes a list of companies that appear to be involved in crypto-currency but has not registered their business with the regulator for anti-money-laundering checks. Since the publication of its inventory, 110 of the crypto companies have ceased trading.

Other options for acquiring non-KYC Bitcoin?

The decision to cut off private access to bitcoin for citizens may not affect most people as most bitcoiners use KYC exchanges that collect your data and pass it on to authorities. However, those that want to keep the prying eyes of third parties away from their transaction history will feel disgruntled.

If bitcoin ATMs weren’t widespread, they would naturally disappear over time due to lack of interest. Still, it seems entirely the opposite; despite the high fees, the access and privacy appeal to a subset of the community. A subset that was growing and needed to be dealt with before it couldn’t easily be stopped.

This ban does look like a play to encourage people to use regulated KYC and AML on-ramps and off-ramps so these funnels can be monitored and, if need be, controlled or worse, shut down and have funds seized.

If you’re one of those who happened to use bitcoin ATMs in the UK and you’re looking for a way around the ban, here are a few options to consider.

If you’ve been a regular bitcoin ATM user for its privacy-respecting elements and still want to use the service, you can contact friends and family in other countries to make the exchange on your behalf. You can send them a wire transfer of cash or a PayPal and ask them to withdraw the cash and deposit it into a bitcoin ATM in another country.

If you don’t have any connections or someone you trust to do deals with outside your borders, another option would be to browse P2P trading networks. Here you will find many buyers and sellers willing to accept your GBP and send you bitcoin in exchange.

All you would need to do is find a reliable seller and transfer your funds to their bank account, and they’ll transfer bitcoin to your wallet.

Buying from a friend

If you have a friend with a KYC exchange or a P2P exchange relationship, perhaps you can approach them and ask them to conduct purchases on your behalf or purchase bitcoin directly from them for cash. Sure they would have additional transactions tied to their accounts, but for you, it will remain non-KYC as the friend provides the buffer that breaks the connection.

If you cannot get access to local vouchers accepted by vouchers to bitcoin service providers, you could exchange those vouchers with third parties like friends and family in exchange for bitcoin and keep it non-KYC.

Another option would be to use a stable coin like USDT on the liquid network; you need a regulated exchange account with a service provider that supports Liquid. Once you have an account, all you’re doing is exchanging your GBP for USDT; no harm in buying some forex, is there? Of course not; once you have the USDT in your liquid wallet, you can do an atomic swap from USDT to L-BTC.

Once you have L-BTC, you can choose to keep it in a liquid wallet or use a peg it out and swap that L-BTC for bitcoin on the mainchain and send it to a supporting wallet.

Governments and financial institutions’ power to keep you away from bitcoin has its limits, sure they can make it harder for you or more expensive to acquire but they cannot keep you from participating in the network. Bans and restrictions on bitcoin only force us to dive deeper, to learn about more privacy-centric ways to manage your bitcoin and to create a stronger network of participants who cannot be tracked by their governments.

South African bitcoin pleb falling down the rabbit hole and willing to share every bump, scratch and knock along the way
View more articles from this author
PrevPreviousBitcoin And The Benefits of Automaticity
NextWhy The Lightning Network Won’t Work For Other ChainsNext