Can Your Bitcoin Be Seized By Governments?

Home » Articles » Can Your Bitcoin Be Seized By Governments? 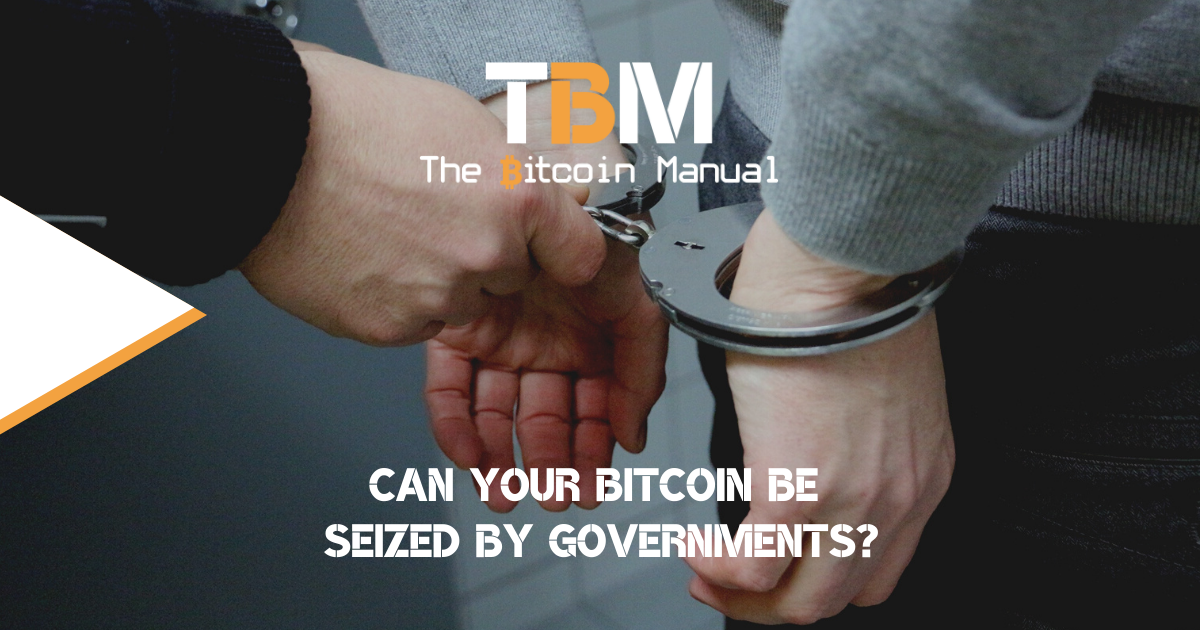 Bitcoin is a contentious topic for many; the idea of having your money stored in a system that is free from government control is a foreign concept to us. When we consider the size of the Bitcoin market today, it’s starting to make a meaningful impact on the world stage and is beginning to strip businesses and governments of income.

As long as your Bitcoin is locked in cold storage, it cannot be taxed or inflated away, which is another form of tax. As these secure digital vaults secure more purchasing power, some feel governments will come after your funds.

We hear the threat thrown around all the time; yeah, well, when it gets too big, governments will shut it down or seize your Bitcoin. Many new Bitcoiners hear these threats and feel uneasy about maintaining a position in the network, as they do not understand the limitations governments have when it comes to Bitcoin.

If a government turns hostile to Bitcoin and you happen to fall within their justification, what can you do? To answer that, we first need to establish how Bitcoin is stored and then break down the various attack methods.

How is Bitcoin stored?

A “wallet” is your Bitcoin bank account. Wallets provide an interface for an individual to receive, store, and send bitcoin to other people.

There are four types of wallets:

Exchange wallets are typically a function of a Bitcoin exchange on which bitcoins were purchased. It can also be a custodial wallet service provider. A custodial wallet user, your Log-in information and some form of 2-factor authentication are required to access an online wallet. You do not hold your own. A third party has them on your behalf. In this case, it’s rather easy to seize if the company is KYC and AML compliant; governments can approach companies to provide user information and seize your assets.

Paper wallets are an uncommon way of storing and securing bitcoin. This type of wallet is a physical piece of paper with your seed phrase. If you are forced to hand over the seed phrase to your wallet, they can take your bitcoin.

Hot wallets exist on a user’s Android or iOS smartphone or desktop device. This type of wallet is generally easy to use and is designed for the average end-user who is just getting into bitcoin. Hot wallets store your keys on the device, so if governments can gain access to your device, they can secure the keys and your Bitcoin.

Cold storage is the most secure way of storing bitcoin because a private key (that is never exposed to the Internet) is required to access the wallet. These cold wallets are difficult to identify because the key could be written down on paper, stored on a USB stick, or memorised by a suspect.

Short of you handing over the complete set or private keys, the Bitcoin in cold storage cannot be seized.

Can Bitcoin be seized?

Bitcoin seizure is how the government attempts to dispossess a citizen of bitcoin “legally” through changes in their legislation or to use existing rules to force compliance. However, bitcoin is a uniquely seizure-resistant type of property.

If your keys are stored correctly, such as the example of a multi-sig approach or if you commit them to memory. Then there is no physical force or legal coercion that can transfer bitcoin from one party to another. You have to provide them with the corresponding private keys.

You would be the only vulnerability in this case. If authorities can ascertain the real-world identity of an individual and their bitcoin addresses, they can coerce that individual to divulge the private keys required to move the bitcoin.

Bitcoin’s technology may be seizure-resistant, but humans are still vulnerable to physical threats, blackmail, and other forms of coercion.

What is a Bitcoin seizure?

In other times it would be a physical dispossessing the owner of a cold wallet. These warrants are typically sealed, unlike warrants seizing an address, which also disclose the entire history of transactions involving the address in question to demonstrate probable cause.

Seizure proceedings must be based on a law enforcement agent’s finding of probable cause that the asset represents the proceeds of or was used to facilitate criminal activity. However, governments can change what is deemed illegal to seize bitcoin from their citizens.

A 3-step process to seizing a suspect’s Bitcoin

Once it is discovered that criminal activity may involve bitcoin, there is often limited time to access the suspect’s wallet. At this step, law enforcement should determine if it is possible to access the wallet by obtaining the necessary passcodes or keys. Access should be restricted to all devices that may contain bitcoin.

Law enforcement must have its bitcoin wallet to store seized bitcoin.

Law enforcement must ensure that their bitcoin wallet is secure. For example, a web-based wallet should only operate on a secure server. They would, in turn, establish a bitcoin cold storage service or self custody to provide additional security because transfers out of the wallet are subject to approval by multiple parties.

What can you do to protect yourself against the threat of seizure?

If you feel your government is starting to show hostile intent to bitcoin, you may want to consider securing your bitcoin properly and breaking all identity ties with your bitcoin.

Once your setup is fully seizure resistant, you now have real fuck you money. No one can take it from you, so it’s important to ensure that your protection is the number one priority. You are now the single point of failure in accessing your bitcoin, so making sure you are either obscured from government oversight or remain out of reach will be your daily struggle.

South African bitcoin pleb falling down the rabbit hole and willing to share every bump, scratch and knock along the way
View more articles from this author
PrevPreviousHow Do You Mine Bitcoin?
NextWhy Bitcoin Doesn’t Need The Internet To OperateNext