Why Bitcoin Doesn’t Need The Internet To Operate

Home » Articles » Why Bitcoin Doesn’t Need The Internet To Operate 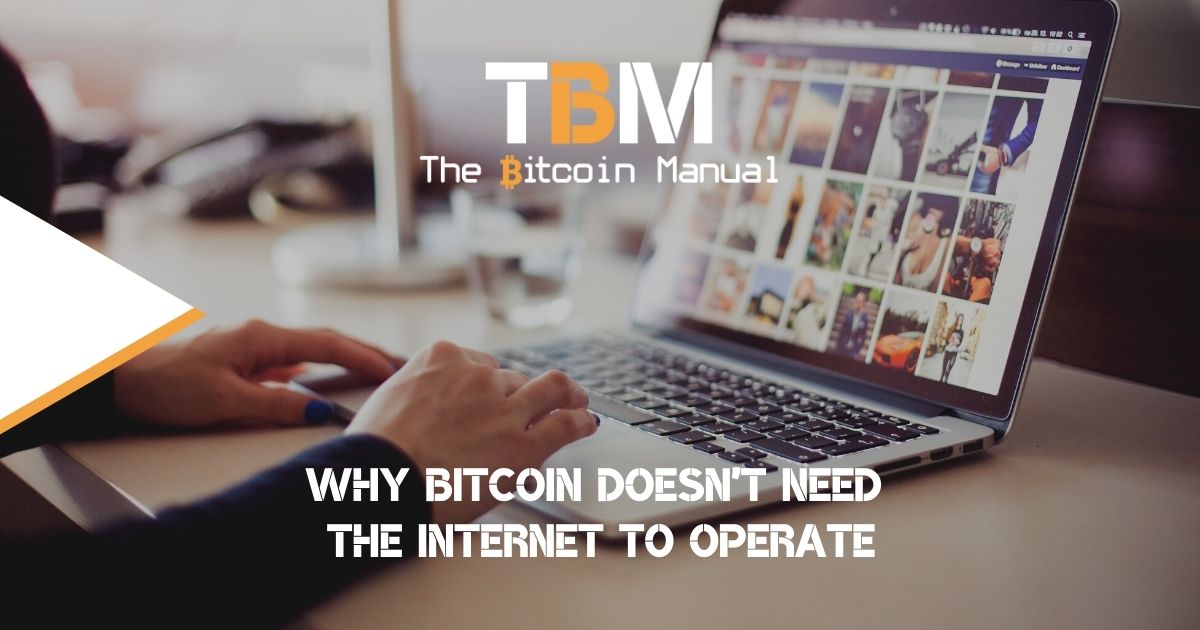 Bitcoin’s success continues to leave many nocoiners sour and looking for a way to attack it. The most common methods are with narratives like government bans, ESG concerns, and, of course, the dreaded what if they shut down the internet thought experiment.

The idea is that the one way to get to Bitcoin is mutually assured destruction since the traditional financial system relies heavily on the internet. Sure there are physical cash bills, but most wealth and wealth record-keeping is digital-only.

But this is beside the point; Bitcoin cannot survive without the internet, mic drop. But actually, that is by no means a fact; Bitcoin can live on despite having its internet connection cut.

In an age where governments are trigger happy at censoring or shutting down networks, it is reassuring to know that Bitcoin can operate on minimal infrastructure and can be adapted to different network connections. If, for example, your country bans Bitcoin transactions and tries to put up a firewall blocking certain websites, exchanges or wallet providers, you won’t be isolated.

You can always use a VPN to access those servers or, better yet, run your own node over a tor connection, and you can access the Bitcoin network and any of their second-layer protocols like the Lightning network or Liquid Network.

Government censorship of the internet

Governments are not to be taken lightly, and censoring or shutting down networks knows no bounds. We’ve seen it happen in Egypt; during the 2011 protests, the government chose to shut down the internet for five days. If physical internet connections are severed, you can naturally migrate to mobile or satellite internet connections.

There are services like the Blockstream satellite, which you can order and connect to their benefit to conduct your Bitcoin transactions. This option requires specific equipment for receiving the signals. Additionally, the initial synchronisation must occur over the internet, so it’s not something you can hurriedly order and set up should you be in the internet dog house.

The worst-case, of course, would be a total internet blackout, where there are no physical, mobile or satellite connections in your country; now, this would probably be the cause of massive societal unrest. But for Bitcoiners, you should still be able to conduct transactions, even if it is a little bit of a hassle.

Having the ability to spend your bitcoin when no one else has access to anything, but physical money can be a godsend. In a case like this, you could conduct your Bitcoin transactions via SMS or Radio signal.

What Bitcoiners need to know about an internet shutdown.

The vast majority, if not all Bitcoin transactions, are via some or another internet connection. If the internet were to go down in a single country or region, Bitcoin may be affected slightly but will still run as the rest of the network participants remain unaffected.

That is not to say it wouldn’t affect the network; surely metrics like hash rate would drop, lowering network security and the unrest would drive some to sell, which would lower prices.

But as for the network itself, it should continue to run uninterrupted. The use of the internet in bitcoin transactions is paramount and, that is why users should expect issues with Bitcoin reference metrics, but the network itself will be fine.

The Bitcoin network distributes transactions on ledgers across thousands of computers in the network. That means that if the internet is cut, computers will stop communicating and broadcasting to the chain. Since Bitcoin mining is distributed as long as someone who can provide hash rate to the network can connect to the internet, the network remains secure and processing.

Industrial level miners would also have to find secondary connections to broadcast their hash rate to the network; this could be through a satellite connection or via an intranet connection to another party who has access to the open internet.

If transactions are interrupted

The bitcoin blockchain falls out of synchronisation in an internet shutdown. The ledgers will immediately stop recording bitcoin transactions, leading to a temporary break in transaction processing. The network will resume as soon as support for hash rate returns.

Transactions will remain in the mempool until they can be added to a block by a miner. In case of inconsistency, users can either update their blockchain or opt out of the networks. Users will not conduct bitcoin transactions due to a network shut down, but activities can resume once the internet comes back up.

Bitcoin without the internet

The massive multilayer impact of the internet on bitcoin is undeniable. I do not deny it; the network would take a gigantic hit in operations and public confidence. Bitcoin is a digital-only currency, and the robust internet rails give Bitcoin the backbone it needs to act as an effective global means of transaction. The internet enables users to leverage it for trading and a means of exchange for buying goods and services.

While the lack of internet access would significantly limit sending and receiving bitcoin, transactions could still occur via offline alternatives. For example, SMS uses an entirely different connectivity bandwidth and protocal.

Some bitcoin hobbyists have suggested that wallets use third-party SMSs to transfer Bitcoin payments. It advocates forwarding transaction data via text messages to an internet-enabled device.

A Finland-based project called Kryptoradio is currently exploring broadcasting blockchain data across DVB-T, which is non-reliant on the internet.

WiFi rebroadcasts could also offer alternatives for processing bitcoin transactions without internet access. It allows the offline verification of the blockchain and broadcasting bitcoin data across a given area or community using a single “sat node.’

These transactions would be a local transfer of balances, most likely on the lightning network. Once a live internet connection is restored, these local balances can then be secured in a transaction with the main chain.

In 2018, there was a new experiment using radio waves to transfer bitcoin. The project is called goTenna, a mobile, long-range, off-grid consumer mesh network, and bitcoin privacy wallet Samourai Wallet. A New Zealand developer transported crypto from a distance of 12.6km away, entirely offline, using only a network-disconnected Android phone and four portable antennas. As his Twitter recount acknowledges, it took one heck of prep, including setting up relay stations.

If you’re still out of luck when it comes to transferring bitcoin via the internet, SMS or radio waves, then there is always the option of trading bitcoin through a physical medium. You could load up a device like an OpenDime or create multiple wallets holding some amount of bitcoin.

If you need to trade, you can hand over the OpenDime or the seed phrase in exchange for goods and services. In the case of the paper, the wallet method will require some trust from a merchant if they cannot verify the balance due to a lack of internet connection.

Building anti-fragility into every layer of Bitcoin

Bitcoin might have been invented with the internet in mind, but it has made allowances to straddle both the digital and analogue worlds. The Bitcoin networks insistence on running the protocal on low tech devices not only increases decentalisation but allows for more devices to plug into the network.

South African bitcoin pleb falling down the rabbit hole and willing to share every bump, scratch and knock along the way
View more articles from this author
PrevPreviousCan Your Bitcoin Be Seized By Governments?
NextHow Bitcoiners Can Improve Their AnonymityNext