How Bitcoiners Can Improve Their Anonymity

Home » Articles » How Bitcoiners Can Improve Their Anonymity 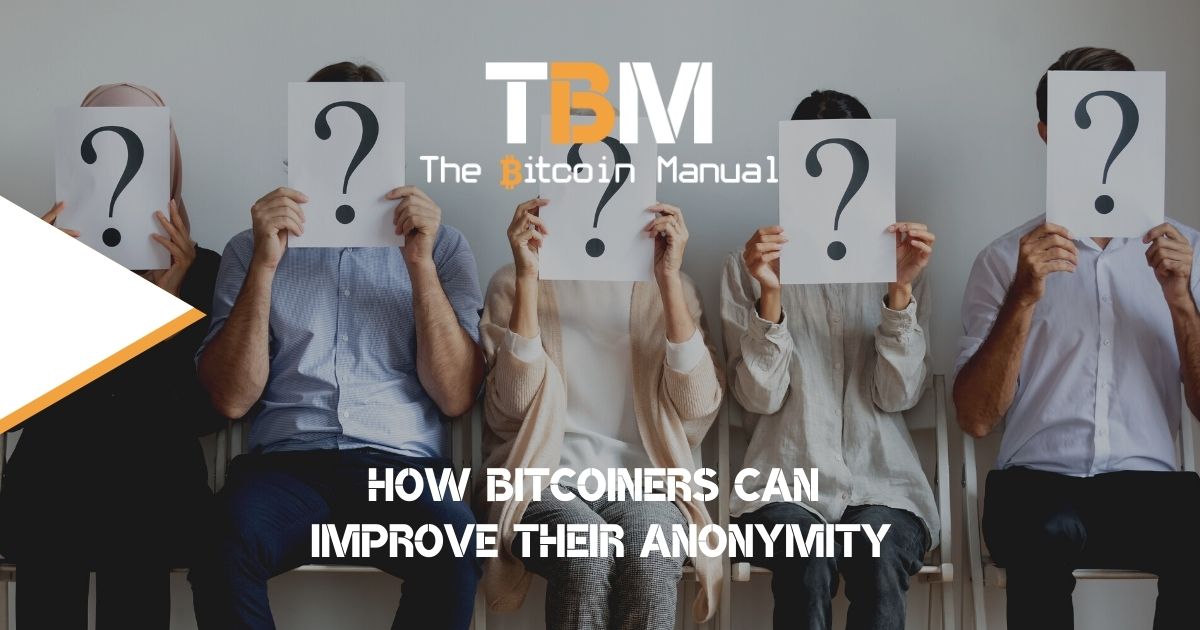 If we look at the trend of Bitcoin adoption, the growth is nothing short of exponential. Every day new Bitcoiners come online, stack sats and learn to hold their keys. An act of personal responsibility, bitcoiners actively encourage and teach. The act of self-custody is a simple one, but the statement is powerful.

You are claiming dominion over your purchasing power with no single entity having the ability to remove it from you. An armed soceity is a robust society; I am not talking about guns; I am talking about resources.

When individuals have access to resources that cannot be confiscated, they become independent of state action. If you have resources, you can mobilise as a group or move on from areas that infringe on your rights. Resources provide optionality remove your tether to the will of the state.

If the past couple of years is anything to go by, then totalitarianism isn’t an abstract concept anymore. It is no longer something we think of as a bygone era or how banana republics operate. Despite what you think of the reasonings for global shutdowns, you have to consider that reasons can change, but the impacts and policies can persist.

We’ve already heard central planning advocates like Christine Legarde openly refer to bitcoin as an escape from the financial system.

“If there is an escape, that escape will be used.”

If people in power view Bitcoin in this light, it would be no surprise to see crackdowns and limitations.

The secrecy of your stack.

All bitcoiners should abide by the stack secrecy act, something I made up right now. You NEVER tell anyone about your stack directly or indirectly; you keep your mouth shut. Like fight club, we don’t talk about how much bitcoin we have acquired.

The stack secrecy act applies not only to social settings but also to institutions. You don’t want governments and institutions knowing how much Bitcoin you hold, or you place a target on your head.

Leaving any trail of Bitcoin in your possession makes you a potential threat if governments go complete Bitcoin ban in your part of the world. So it’s essential to ensure that your stack cannot be tied back to you in any way, shape or form.

To answer this, we need to establish a base for privacy first. If we consider your standard banking transactions, then by default, Bitcoin payments are far more private than traditional electronic payments like bank wires or credit cards.

Bitcoin is pseudonymous, and depending on how you acquire it, companies, individuals, and governments can, with some effort, track you.

Bitcoin’s privacy model works drastically different to that of other payment systems, which forces us to adapt our thinking when trying to be more private. Bitcoin is not like cash, where you can maintain your privacy regardless of how you conduct business, and you need to be vigilant when using the chain and the assets you hold.

Bitcoin gives us plenty of options to be truly anonymous, but employing these options requires skills, knowledge, and care.

If you’re in developing nations like myself, things are a little easier for you. Governments do not have the motivation, resources or expertise to enforce the laws they create, and with the subpar fragmented systems, you can fly under the radar pretty easily.

These limitations are not a given, and it is not to say that governments won’t push for better oversight as they see funds flowing into bitcoin from their jurisdiction.

Centralised exchanges are an easy choke point, and if you want to conduct business in a country, you need to comply with regulations. We’ve already seen exchanges providing data to governments and revenue services for tax purposes, so collecting data shouldn’t be too hard.

The actual crackdowns tend to come from developing nations, more so in Europe. We’ve seen new proposals that can force international exchanges servicing local clients to collect the details of people sending and receiving crypto under new rules proposed by the European Commission.

“This package aims to improve the detection of suspicious transactions and activities and to close loopholes used by criminals to launder illicit proceeds or finance terrorist activities through the financial system,” the Commission said in a statement.

The proposed rules would require cryptocurrency exchanges to collect customers’ identifying information, bringing them in line with the “Know Your Customer” (KYC) rules already imposed on other financial institutions. The new law would also establish a new EU-wide anti-money laundering authority (AMLA) with oversight of cryptocurrencies by 2023.

The push for KYC and AML is all a way to bag and tag Bitcoin holders and to see who holds the most value out of state hands.

If you want to start covering your bitcoin tracks, there are several methods you can use, all with their trade-offs. I will openly admit it is not easy and can be a hassle, but isn’t a few extra steps and a few hours of learning worth your privacy?

If not, then so be it; expose yourself to the powers that be; there’s nothing wrong with it; ultimately, it’s your choice. If you feel that you have nothing to hide, then keep creating a data profile for others to follow.

I am not saying you have to do this with your entire stack, but remember, if you do find yourself on the end of unfavourable government enforcement, you may want to have a small private stash at arm’s length.

The best way to use bitcoin that has no trace to you would be to opt for non-KYC bitcoin. One way to acquire KYC free bitcoin would be to mine it yourself.

If that is out of the question, you can look at purchasing bitcoin using swapping services, P2P exchanges or DEX’s.

You can also conduct work and ask to be paid in Bitcoin or settle a bill with friends and have them pay the balance back to you in Bitcoin.

As long as the addresses used cannot be directly attributed to any identifying marker, you should be in the clear.

If you cannot secure KYC free bitcoin and you’re forced to use a centralised service, know that your records are kept by the service. There is no getting past the fact that the exchange will know exactly how much Bitcoin you’ve bought with them.

While this isn’t ideal, you can break the ties with your stack by removing it from the exchange and using a CoinJoin service. The bitcoin address you’re using to extract funds from your exchange is tied to their records, along with your name and email.

To disassociate your identity from those funds, a Coinjoin takes other users transactions and essentially throw their Bitcoins into a bucket and then take back the same amount from the bucket. This “Bitcoin bucket swapping” can be done in a decentralised, trustless way through implementations like Joinmarket.

In Mixers, two people swap their Bitcoins with each other, and it’s difficult to observe that they used a mixer. While most mixers today are large centralised services, mixing could be done trustless through fancy cryptographic tools like atomic swaps.

However, such systems do not have a comprehensive implementation.

When using a mixer, neither participant can learn a lot about the other participants, and therefore cannot potentially fully link accounts with an identity.

The UTXO’s are swapped with one another, and therefore the identity originally tied to the UTXO would be incorrect.

If you are afraid of using services like CoinJoin’s or mixers, or you really don’t want to be paying on-chain fees that aren’t going to be really practical for smaller transactions, then you may want to switch between layers.

You could use submarine swaps to trade your KYC’d Bitcoin for Bitcoin on the lightning network and then swap back out to a new Bitcoin address later with a different amount.

Alternatively, if you’re a liquid network user, you can conduct a peg into L-BTC of different amounts and then do one peg out or vice versa.

Since you can use a cheaper side-chain to consolidate or break up transactions as you would like, this can be a more affordable option and provide you with more versatility. Taking advantage of side chains, you can only touch the base chain when you’re ready to secure into preferably a newly generated Bitcoin address.

I know I can sound a little gloomy, but I cannot stress enough the importance of privacy when it comes to your wealth. Humans and institutions run by humans are not infallible, and rules can change in the blink of an eye, so making sure your bitcoin is not only secure but as anonymous as possible will allow you to sleep soundly at night.

South African bitcoin pleb falling down the rabbit hole and willing to share every bump, scratch and knock along the way
View more articles from this author
PrevPreviousWhy Bitcoin Doesn’t Need The Internet To Operate
NextWhy There Won’t Be A “Next Bitcoin”Next