Why There Won’t Be A “Next Bitcoin”

Home » Articles » Why There Won’t Be A “Next Bitcoin” 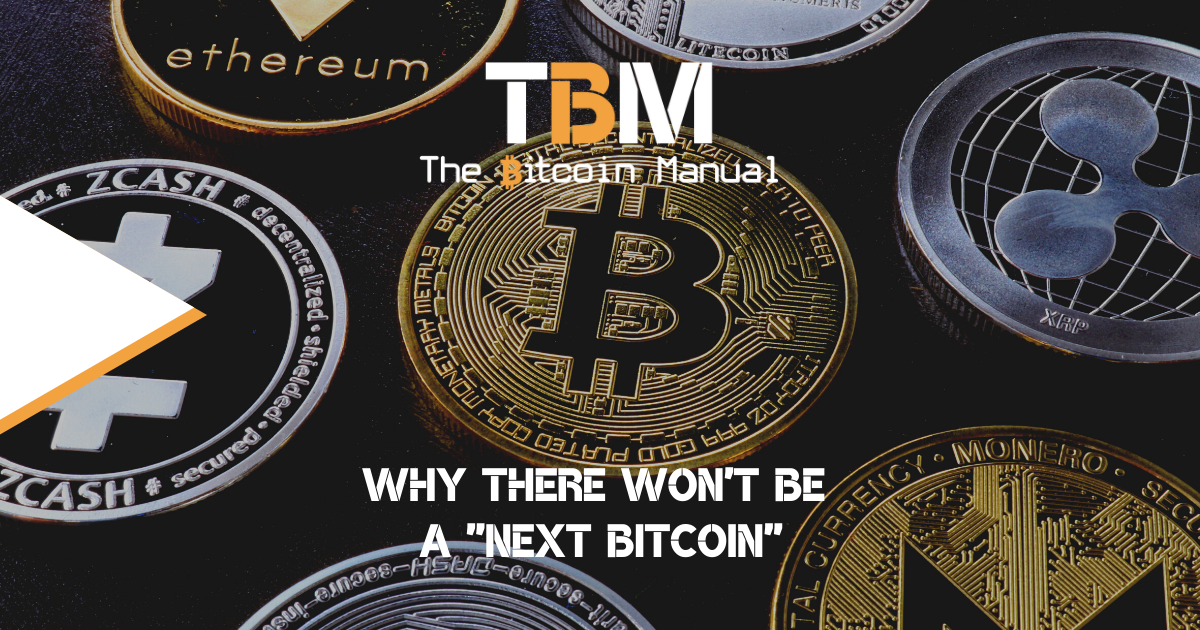 Being a Bitcoin Maximalist is not about shilling bitcoin and telling you that it’s perfect; it’s not. Perfection is a dream, and to think anyone technology can solve all issues in one go is ridiculous. Bitcoin is not perfect in every regard, but it has made the trade-offs needed for perfect money. Yes, it is slow and has certain limitations on its base layer. Still, it is secure, robust and decentralised and allows anyone to participate and plug into the network.

Despite being a technology, bitcoin is not only a technology play but an economic one. It doesn’t only solve transfer and record-keeping of funds but also solves the issue of inflation and provides us with an inelastic monetary measuring stick.

Something the world has lacked for some time and has only seen us continue to misallocate resources without those decision-makers genuinely feeling the effects of poor economic calculation.

But every few people are going to tell you that, when it comes to cryptocurrency and shitcoins, the narrative is that they are all equal. The only differentiating factor is technology. It won’t take you very long to get wrapped up in endless debates, posts, videos and whitepapers telling you why Bitcoin sucks and why this new coin, blockchain or token is so much better.

We already see newer investors referring to bitcoin as a boomer coin and old technology, that it is slow and expensive and cannot compete with innovation.

There is now talk of the “flippening”, a case where another network will flip bitcoin in market cap, something I don’t see happening. It would be more likely that these other coins flip and cannibalise one another. Even if another coin were to flip bitcoin in market cap, it doesn’t change the underlying fundamentals of the coin, and if something were to beat bitcoin on merit and match all its fundamental trade-offs, that would be great for the world.

If it flips Bitcoin based on accounting tricks, like lock-up terms while destroying supply, it will only be a temporary hold-off, in my opinion.

The point of money is to hold value through time and space, and longer time frames will expose anything inferior to bitcoin.

If we look at any of these other coins measured in bitcoin terms, we see they are all losing value. The amount of satoshis it takes to buy a certain coin becomes less and less as their supply increases. The value in fiat currency may be increasing for all coins, but it doesn’t mean their purchasing power increases.

Every feature comes with a trade-off.

Blockchain has solved the problem of digital ownership and the double-spend problem; other than that, it is a pretty awful technology for anything else. However, the success of bitcoin has seen opportunities in the tech space trying to apply this technology to anything they can. You could add blockchain to ham sandwiches, and your food truck would be worth multiple millions right now. That is the level of absurdity happening in the blockchain sector.

The idea that blockchain can be improved is not impossible, but it is greatly overblown. The trader off are made by other blockchains to provide improved speed in transactions; the volume of transactions and smart contract execution on the base layer come with trade-offs.

The more complex the executions and commands embedded into the chain, the bigger the chain becomes in size. A bloated chain means more memory and technology requirements go up, and this increases the barrier to entry and becomes inherently centralising.

In addition, as more complex functions come into play, it opens up your codebase to more vulnerabilities, and you continuously have to make trade-offs. These trade-offs often come in the form of privacy and security, two places bitcoin does not compromise on as part of its value proposition.

A lack of privacy and security means you open yourself to attack. The larger you become, the bigger the change of attack internally, externally or even on the national level. Remember, the more successful you become, the more others will want control over that success.

While bitcoin has shown its anti-fragile nature through the resistance of several attack vectors, other cryptocurrencies have yet to prove their worth when standing up to attacks.

The concept of bitcoin and blockchain to solve the double-spend problem is now out of the bag and bringing a digital asset to life. You can do it in a few hours with a little bit of coding experience; in fact, you even have script builders that can do it for you.

When satoshi launched the bitcoin blockchain through his mailing list, no one gave it the time of day. A few people supported the network, and for the first few years of its existence, it didn’t have a price. It was a ground-up movement run by hobbyists.

For satoshi to convince people to join the network in the early stages, he needed to provide utmost transparency. The network is fully auditable, the competition for coins is open to the public, and the code is open-source and runs through a distributed system.

Satoshi has to do these things to gain participants’ trust; the trust was formed through complete openness and the ability to verify everything yourself. There were no markets and therefore no monetary value, and with this, it has not corrupted by the profit incentive from inception.

This is not the case with other coins; all launched with founders looking to profit, having backing from investors who are looking for big exits, and naturally retail foaming at the mouth looking to flip their positions too. These profit incentives have bled into the way the allocation of coins is distributed and how the protocol works and create a preferential treatment for certain users, similar to the fiat system.

Bitcoin’s code can be copied but not its network.

But Bitcoin has several forks and can be copied since it is an open-source technology. Yes, you are correct; I could spend a weekend copying the code, changing a few parameters, and launching a new bitcoin. That doesn’t mean I will convince the various groups to go along with it.

That’s a lot of people to convince, and a network like that is not easily duplicated. It is also rather impractical to migrate, and short of all these subgroups getting something valuable like “x10 improvement”, none of them will have an incentive to switch.

This is a mistake many of these alternative coins make; they think with the capital they have or funding runway that they can use it to migrate users and other touchpoints to their network. Eventually, they’ll hit a wall as there is not enough capital in these networks to convince enough people to switch, which would bring them critical mass.

Tip: Listen to Michael Saylor and Gregg Foss riff about why there is no second best to Bitcoin on Twitter Spaces

Let’s take the modern smartphone; it has a music player, web browser, SMS functionality, call functionality, near field communication, email, GPS navigation, and a camera. All these tools were once separate devices but eventually found that to achieve scale, they needed to piggyback off the device most people would want, regardless, a communication device.

As phones could squeeze in more processing power into each iteration, they had more room for growth. So too was it able to gobble up other industries, and these features were sucked into a black hole. Today the modern smartphone serves so many of our needs; we hardly think of the past when it was fashionable to have a walkman or iPod and a compact camera.

I think this will be the same for bitcoin, as more people start to hold the asset, as more merchants accept it as a form of payment, as more products integrate into it, the network effect grows and ossifies. People will be very reluctant to leave the relative safety and convenience of the bitcoin network and, in doing so, forces any features and products worthwhile to migrate over to the bitcoin network to survive.

Money is probably one of the most ruthless markets out there. If you have an inferior monetary policy, inadequate access to markets, and lacking liquidity, you’re most likely going to die off.

I know it doesn’t seem like it now with institutions and retail firmly believing they can replicate bitcoin’s success by throwing enough capital at a project, but they will soon learn fiat doesn’t always buy success. Even if that is the case, in the various tech plays we’ve seen before, the bitcoin standard.

Bitcoin is our only chance at achieving sound money.

Smart contracts are a tremendous achievement, and decentralised finance has its value, but for me and a large percentage of the world, sound money is the product we crave most.

Bitcoin, as far as we know, is the only monetary network that is genuinely decentralised enough that it cannot be stopped. It also has enough people with a vested stake that changing the monetary policy is near impossible.

If bitcoin continues in the fashion it has in the last decade; then it has no other outcome but to absorb more monetary premium from the worlds’ other asset classes. Humans are stubborn, but they are not irrational. As more capital flows into bitcoin, others will follow suit based on their self-interest.

If bitcoin were to fail, it would not mean the success of other cryptocurrencies; it would mean the entire digital asset space is a failure. If all the options are corporate and private equity funded databases, all with preferential access and allocation, then the whole space is basically worthless and can be captured and absorbed by the state.

Cryptocurrency is simply an innovative way to raise capital and creation of a new asset that has yet to be regulated and captured to be brought under the control of the state.

South African bitcoin pleb falling down the rabbit hole and willing to share every bump, scratch and knock along the way
View more articles from this author
PrevPreviousHow Bitcoiners Can Improve Their Anonymity
NextWhat Is The Future of Bitcoin?Next