Resilience Is Not Priced Correctly In Cryptocurrency

Home » Articles » Resilience Is Not Priced Correctly In Cryptocurrency 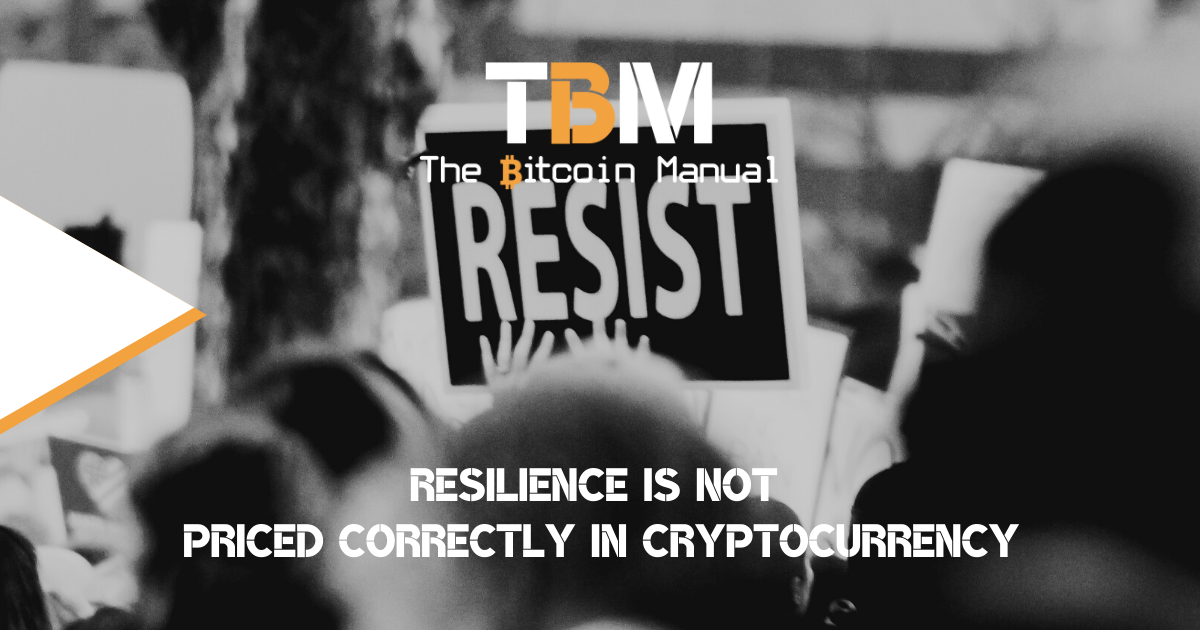 The idea of a decentralised monetary network centre around the value proposition that it cannot be changed or corrupted and can resist attacks from the outside. If the network can be breached via internal or external means, it has no business holding any utility or value over time.

Think about it, as a network like Bitcoin continues to grow from millions, to billions, to trillions, the incentive to crack that honeypot and take some of that sweet nectar for yourself increases.

We are human; we are all infallible and for me to trust my wealth in a network where another can tap it up like a mapley tree and suck straight from it is not something I’d want to use. I’ve actively have been trying to move away from it because that’s precisely how the fiat system operates.

Fiat has distinct critical breaches in its protocol that allow the business and political elite to syphon off more of the stored value from collective society labour.

The goal of Bitcoin is to create a fair playing field where the rules are the same for everyone, something we do not see in other forms of financial assets, including the broader cryptocurrency and digital asset ecosystem.

Bitcoin has continued to operate for over a decade, and in that time, it’s had to take on several attack vectors, and the protocol continues to prove its robust nature. It has never been hacked and holds the title of the most powerful and secure computing network globally. The bitcoin network spares no expense to secure its chain by leveraging terra hashes of electricity from all over the world.

While its governance and rules are protected by well over 100 000 nodes that run and verify the protocol and code. Each node runner is most like a Bitcoin holder, and therefore all have a vested interest in enforcing the monetary rules of the network.

The Bitcoin network has 24 hours uptime and millions of eyeballs on it all the time; if any attempt to attack, it would be flagged near immediately.

During the block size wars between August 2015 to November 2017, we saw some of the largest players in the Bitcoin space trying to control the network. These entities wanted to change the protocol to favour certain subsets of the community, and the proposal was rejected. Those who favoured the hard fork went on to create and support Bitcoin Cash, and those who did not continue as Bitcoin.

This was an internal attack, where Bitcoin supporters from miners to node runners pushed hard for a contentious hard fork but were ultimately forced to create an alternative project.

But what it also proved is that Bitcoin can withstand an attack from within its ranks.

In 2021, Bitcoin faced its biggest test in the form of the China mining ban. Bitcoin was overexposed to the Chinese mining market, and once the ban took effect, the network took a knock in terms of security.

As a large number of miners went offline as they had to relocate, the hash rate dropped, and so did the price. However, the rest of the network picked up the slack, and after the difficulty adjustment, Bitcoin found its feet again and continued on.

It was a monumental statement of durability as Bitcoin proved it could survive a coordinated attack from a sovereign nation.

Shitcoins have a vested interest in ensuring capital does not flow into Bitcoin but rather their network. I and many Bitcoiners see them as a distraction to the goals Bitcoin aims to achieve. In the Bitcoin replica market known as cryptocurrency, people draw tribalistic lines based on their portfolios.

These projects have very little fundamental value or method of attracting capital apart from diverting funds from naive investors. They have a vested interest in keeping people and value away from bitcoin.

Yet Bitcoin marches on and remains the only option.

Nothing competes with Bitcoin on merit; they are only competiting on temporary capital flows, something Bitcoins superior monetary policy exposes with time.

We’ve seen attacks from the media in the form of associating Bitocin with money laundering and illicit activity. We’ve seen governments seize Bitcoin from various operations. We’ve seen ESG reports on how bad Bitcoin is for the environment, and the propaganda is relentless.

Bitcoin has had to deal with the court of public opinion and has not flinched, sure. You can speak to those who held Bitcoin and sold out of positions due to certain stories.

However, the value in the protocol and the integrity of the network was never under threat, and it continues.

How does your network react under stress?

Many cryptocurrency networks claiming to be an alternative to Bitcoin do not make the same trade-offs to secure the value inside the protocol. Sure they have not been hacked or rug pulled by insiders yet, but it doesn’t mean the ability or rather a vulnerability is not baked into their current system.

These threats have not yet been exploited, and therefore the market doesn’t account for them. A threat that I think is mispriced when we consider the valuation of these systems. The fact is, the larger they become, the more fragile they become to internal coercion or external threats looking to access the value in that network.

So as the network grows in value, so does the threat level and the incentive to break the rules rises. These other chains have not come under threat, and once they do, we will see the value in their so-called decentralised nature or rather lack thereof as they ward off attackers.

More eyes are starting to take note of the value accruing in the cryptocurrency space, and with that attention comes a new host of threats. It could come in the form of regulation, as governments try to put pressure on many of these DINO projects that hide behind blockchain but are central entities that are also unregistered securities.

In other cases, it could come in the form of other crypto projects providing a better solution and cannibalising one another since they are all fighting for each other’s liquidity. As the supply of new cryptocurrencies increases, they dilute one another, and eventually, their ponzinomics unfold.

Many if not all of these other cryptocurrencies are vastly overpriced for the security they provide and will not be able to secure that value forever. Eventually, those within the inner circle or an external threat will expose the vulnerabilities, and when it does, a repricing will occur sharply to the downside.

South African bitcoin pleb falling down the rabbit hole and willing to share every bump, scratch and knock along the way
View more articles from this author
PrevPreviousBitcoin Maximalism Is The Free Markets Answer To Regulation
NextWhy A Bitcoin Super Cycle Is UnlikelyNext