Why A Bitcoin Super Cycle Is Unlikely

Home » Articles » Why A Bitcoin Super Cycle Is Unlikely 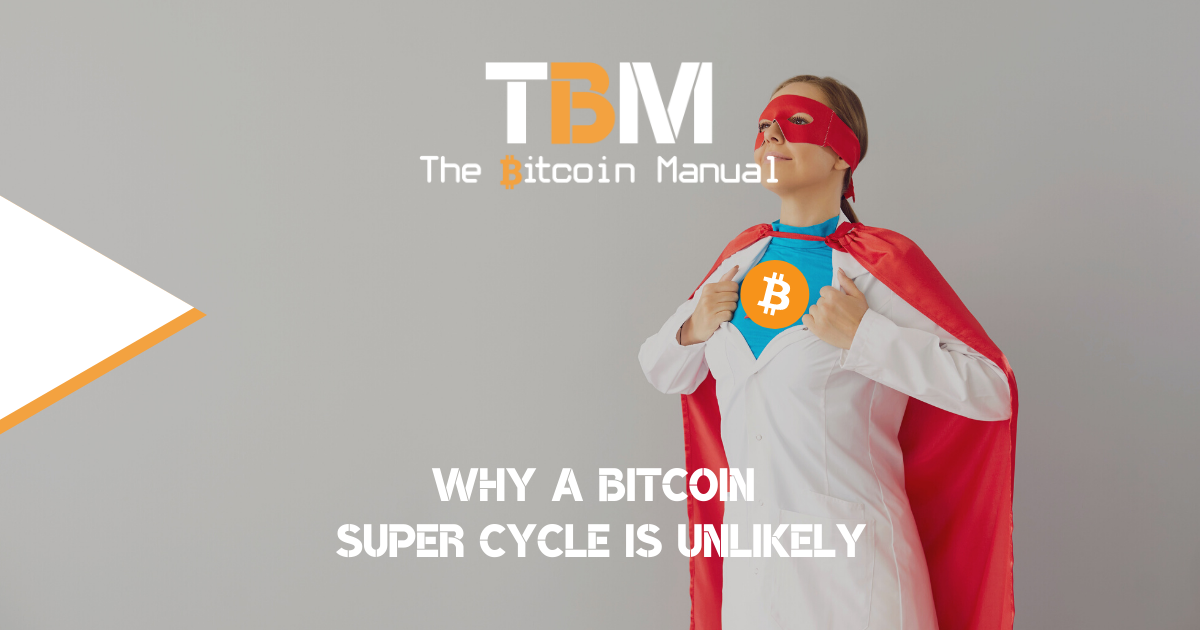 Most people in Bitcoin come to it for the price appreciation, myself included. Eventually, some of us fall deeper down the rabbit hole, and it changes our way of thinking, our time preferences and our consumption patterns. It even has you waste time and money creating a blog dedicated to Bitcoin that very few people read, but hey, we all have our vices.

Mine isn’t hurting anybody, just educating and orange pilling somebody.

Now Bitcoin is a ticking block clock that soldiers on regardless of what we say or do. As long as there are several copies of the ledger running on geographically distant nodes and people providing hashing power to the network. It will continue to operate.

How much that network will be worth and how much value it can hold and transact per day may be different, but the fact is the network will continue to run.

Now, this is a pretty dull observation; it’s like watching paint dry but with numbers, basically like watching a matrix screen saver all day. So people have to jazz it up, and what do they turn to?

The price, of course, most people want to get rich, and if you tell them they can get rich, you’ll get sheeple willing to listen to you to preach at the altar of your social media account.

There is no shortage of personalities online leveraging Bitcoin to grow their brand as a thought leader and influencer. Even if that means dropping some bad or controversial takes, it doesn’t matter.

It’s all about the engagement.

Nothing will get more engagement than the idea of Bitcoin going o the moon and blowing past it. Everyone is getting rich without any work in a short time frame, hell yeah.

This births the idea of the supercycle, the ultimate role-play scenario for moon boy and moon girl “FinPorn”.

What is a Bitcoin supercycle?

The supercycle is a phenomenon where the bullish increase in the price of market security causes its price to increase further.

Think of it as a positive feedback loop: people become interested in investment, so they start buying it, which drives up the price, and that makes more people confident about it and encourages them to buy more so the price goes up further, and so on.

The term ‘supercycle’ refers to an extended bullish run of the Bitcoin price. The supercycle theorises the price rises to reach an inflexion point of mass adoption. The price promotes the increase in new users acquiring a stake that outstrips daily supply creation and Bitcoins value skyrockets by several multiples over this period.

To me, the supercycle feels “shitcoiney“, it’s a shallow narrative only designed to attract retail, and when you play a narrative game, you need plausible reasons.

The past two years of government policy has seen the global economy take a battering. In any economic downturn, governments would, in turn, respond with massive money printing operations to provide stimulus. Since we’ve seen the biggest economic downturn in a century, we would require an equal or greater response. Many Bitcoiners believe that this new currency creation would flow into Bitcoin.

As Bitcoin becomes, more institutionally friendly new products are created leveraging the asset. The creation of ETFs in various countries, in theory, would see institutions able to own Bitcoin exposure and flood massive amounts of capital into clawing coins off the market as collateral for those Bitcoin ETFs.

After El Salvador’s history-making decision to make Bitcoin legal tender and acquire Bitcoin for its national treasury, the idea of nations getting into Bitcoin became a reality. Many super-cyclists feel that this is the first domino to fall, and other countries will follow in their example, generating new short term demand for Bitcoin.

The tried and tested Bitcoin cycle.

If there isn’t a super cycle, what would be the other option? Well, the monotonous old four-year cycle, of course. The expected supply shock repricing has played out twice before and given us a template. The typical Bitcoin market cycle consists of four phases:

During this phase, investors accumulate Bitcoin, which usually sees Bitcoin in a lull for a few months as people recover from the previous correction. For most of this time, demand remains flat, and the price trades sideways as daily demand and supply find an equilibrium.

As investors accumulate Bitcoin and miners refuse to sell based on specific margin requirements, the price gets edges higher over time until it enters its continuation phase. This phase usually begins once the new halving cycle begins, and while the price rise isn’t immediate, the number of coins moving into long term storage ticks up.

The Bitcoin halving events occur in the continuation phase, spurring a new wave of accumulation that kicks off the parabolic stage.

The parabolic phase is marked by Bitcoin hitting all-new highs in price as speculation and greed take over. Many investors will pile in as the Bitcoin market tries to factor in the supply shock with a massive uptake in demand.

After all the excitement of the parabolic phase, there is a usual blow-off top, where the market demand is exhausted, and the need to secure short term profits pushes the price down. Historically Bitcoin has seen an average 80% price drop during the correction phase.

This phase can be brutal, leaving scars and wiping out any excitement leftover from the previous parabolic phase.

Downward pressure on the supercycle

In this current cycle, 144 blocks are mined per day on average, and each block produces a block subsidy reward. The reward is 6.25 bitcoins per block. 144 x 6.25, which results in 900 new coins minted every day.

At the current market price of $50,000, that would require $45 000 000 to hit the market every day to gobble up that supply. Naturally, miners aren’t selling everything they acquire; they can sit on coins and either finance with debt or cash flow trading the market.

That means the number of dollars needed to maintain the price would double to $45 000 000 per day to maintain that price. As the price rises, it costs more to remove that new supply off the market.

This places downward pressure on the price.

The reverse of the illiquidity ratio

According to on-chain data, long-term holders, or entities that have kept their BTC dormant for at least five months, are changing the narrative for this cycle. The number of coins owned by long-term holders has made a sharp recovery since the May 2021 crash and is now at an all-time high.

These entities now hold over 12,731,020 Bitcoins. As a percentage of circulating supply, these long-term investors now possess 67.7% of supply. When factoring out lost coins (using adjusted supply instead of circulating), this number is as high as 84.5% of supply.

Now, remember me speaking about as the price rises, that it becomes it’s harder to gobble up supply? Well, it’s even harder if this illiquidity ratio reverses and the old supply that previously sat dormant now enters the market bringing in further pressure.

Are you a supercycle believer?

Now, of course, Bitcoin doesn’t react like any of us think it will, and a supercycle can happen. Still, the indicators available and the sheer amount of buying volume required to push Bitcoin into supercycle territory.

Sure it makes for a great thought experiment, engagement tweet or podcast topic to lure in listeners and sell ad inventory with clickbait, but I think that’s all it is, financial entertainment.

But again, what do I know? I’m no macro guy, no TA guy, no dude with a platform im just a shitstain of a pleb with an opinion. So what’s yours? Feel free to share it with us in the comments.

South African bitcoin pleb falling down the rabbit hole and willing to share every bump, scratch and knock along the way
View more articles from this author
PrevPreviousResilience Is Not Priced Correctly In Cryptocurrency
NextHow Do You Mine Bitcoin?Next