DINOs Will Go The Way Of The Dinosaur

Home » Articles » DINOs Will Go The Way Of The Dinosaur 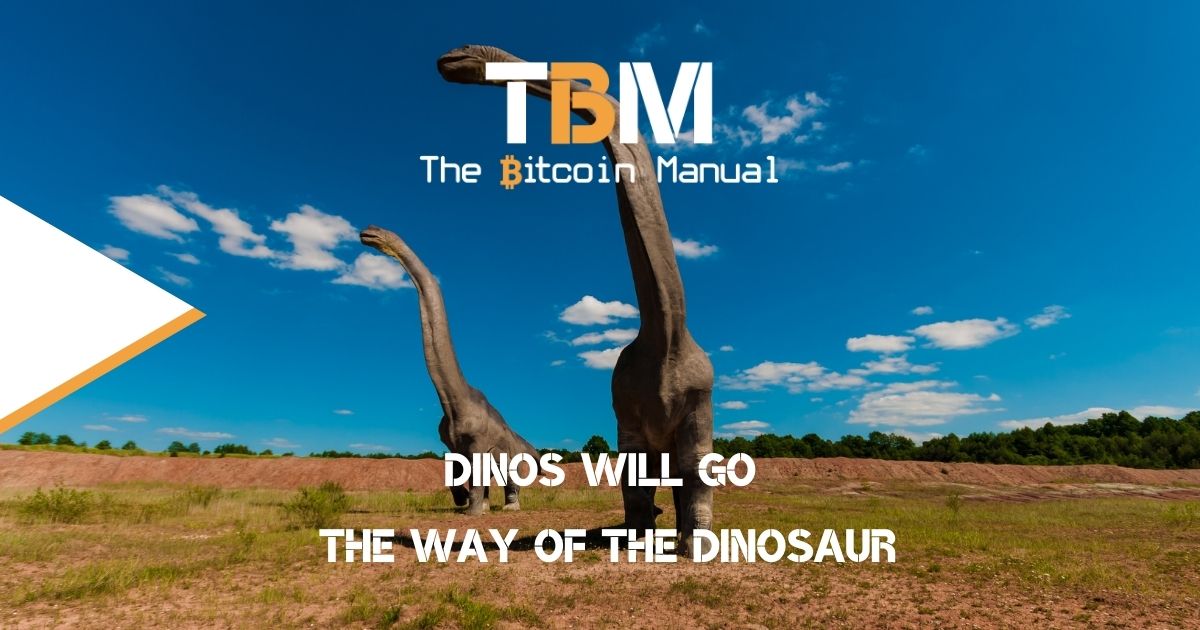 For most of us, the journey into Bitcoin will take several detours; if you are going to learn about how this blockchain “thing” works. There are very few of us who remain Bitcoin purists; you’re going to explore the land of altcoins and shitcoins eventually. It’s okay if you want to try your hand at shitcoining, don’t let anyone tell you differently, I’ve shitcoined and ultimately made my way back to Bitcoin, and many of you will get there too. We all have our path to walk and will fall for snake oil salespeople along the way.

I am not saying there is no naivety or lies among Bitcoin advocates; there are; what I am saying is the number of lies and overpromising on the shitcoin side is exponentially higher. I would know; I bought those coins, fell for the pitch, and got burned for it.

What I lost in fiat and potential Bitcoin, I gained insights and education, so I don’t count it as a total loss. I probably learned more during my time in Bitcoin and shitcoining than I did in university.

All coins are not the same.

It sounds simple enough, but you’ll be surprised at how many people lump all coins together with Bitcoin as the same. I’ve spoken to many a no-coiner and pre-coiner, and their main objection or issue is there are so many coins; how do I tell the difference between any of them?

Everyone who supports the Bitcoin infrastructure has an economic duty to do so, the miners want to get paid to secure the network, and the node operators like myself want to ensure our investments are secure. Anyone can plug into the network and support or attack it, and those who support it are there to protect it and enforce the blockchain rules. The decentralisation of the network makes it far too expensive to co-opt it and more profitable to support it by mining or holding bitcoin and running a node.

Now add to that solving the double-spend problem and achieving digital scarcity and instant finality of settlement and what you have there is money with superior attributes to anything we have now.

Imitation is the greatest form of flattery.

When you’ve solved such a complex problem, and your product targets the biggest addressable market in the world, namely money, and financial services, there’s ALWAYS going to be competition. Bitcoin competes with fiat money; it competes with bonds; it competes with stocks as a way to store your unused productivity.

Everyone has a choice on where they want to store their money, be it in traditional assets, precious metals, real estate, and now Bitcoin. What makes Bitcoin unique is in that it has properties we associate with fiat and with precious metals.

You can spend it and settle small and large transactions by dividing up Bitcoin into smaller units, but that all those units retain value and appreciate as an asset would, it’s a strange concept for those of us who are used to a fiat standard.

Now that you see what Bitcoin offers you, you can imagine that everyone and their venture capital fund would want to try and copy it.

Since the Bitcoin code was made open source, we’ve seen an explosion of new projects that reference Bitcoin but made particular trade-off’s to try and “improve” on Bitcoin. Making those trade-offs either makes the chain more centralised or places the enforcement of the rules in the hands of a select few, similar to how the fiat system works.

There are investors with a pre-allocated stake; there are companies and employees with a stake they have granted themselves with special privilege. To me, altcoins are more like stocks being issued to try and fund a rival Bitcoin project that will eventually fail.

Shitcoins benefit from the money illusion.

Shitcoins are NOT money; however, they benefit from the assumption that they will outcompete Bitcoin to become money, which is why we’ve seen these astronomical valuations for projects that seemingly do nothing. They are valued at a premium of the off-chance that they could rival Bitcoin.

The way I see it is altcoins and shitcoins are a way to access public market capital without the need for an IPO or a SPAC and going through all that regulation. Launching a coin is pretty simple, and if you can convince enough people to part with their fiat or Bitcoin, you can quickly build up a treasury for you to fund your project.

The problem is shitcoin investments still adhere to the fiat standard; the whole goal of these VC and angel-funded coins is to make more fiat for their seed investors, which they do, without delivering a product. Shitcoins are what VC’s have been doing for years but more optimised for their exit and for someone else to hold the bag, then rinse and repeat.

Altcoins are the DINOS of our blockchain.

Altcoins are trickle-up economics on steroids, and they are NOT decentralised. They may be distributed as in a few copies of the ledger are run by different parties, but those parties can all collude, and often, all those parties are tied to the same entity.

So what is immutable if anything can be changed? Nothing, these chains are fintech companies pretending to be decentralised to avoid specific regulations and access cheap retail capital and rent seek from the general public. They eventually produce nothing or something that is doomed to fail.

A successful actual decentralisation project must include the following mandatory elements:

To adopt decentralisation means you are adopting the enforcement of a strict set of rules that the community agrees upon. So if a project is promising you the world, it’s because they are centralised, which means they are not censorship-resistant. They can be shut down and either bought out by larger entities or forced to play by regulator rules.

The next hot blockchain application isn’t going to happen. Blockchain had one application, and that was for sound money. Bitcoin achieved that, and the rest will imitate it until their funding rounds dry up, governments shut them down, or banks acquire them.