Regulation & The Importance of Bitcoin Self-Custody 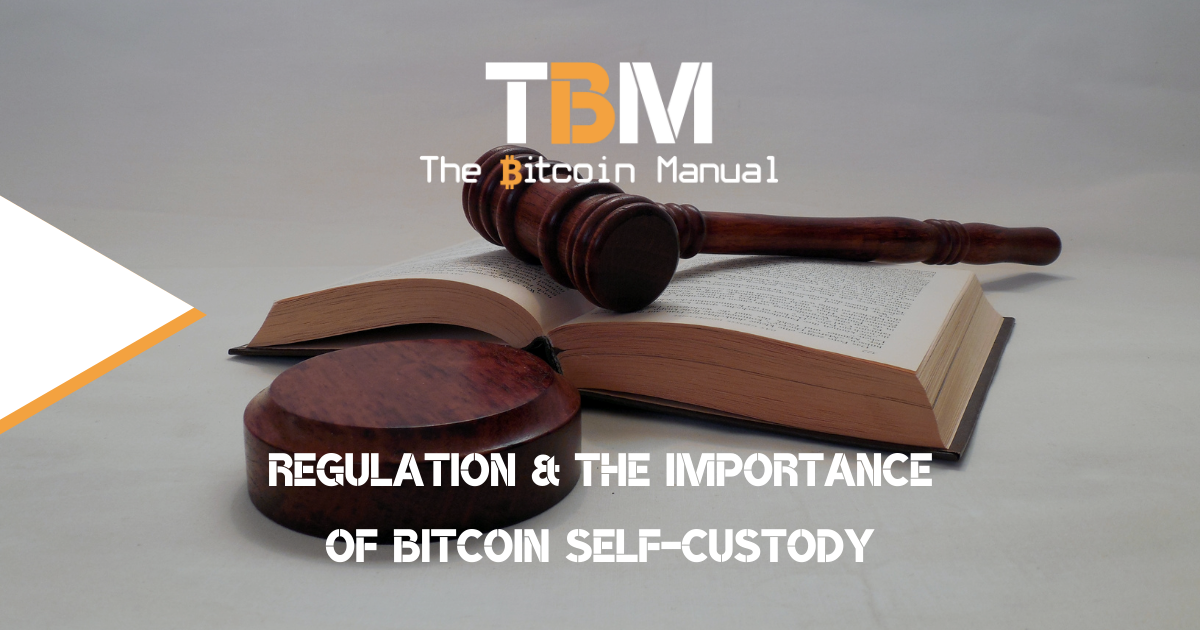 I’m pretty big on Bitcoin security and always want people who stack sats to take ownership of them by getting a cold wallet, rather than leaving their coins on 3rd party platforms. Having said that, I have moved my Bitcoin around different places and it got to a point where I had more out of my own custody than I would have liked.

Che wrote about self-custody recently but as more has been uncovered about the regulation around Bitcoin and crypto, particularly in the USA, it’s made me appreciate even more the importance of Bitcoin self-custody. I was already aware of it and this was deeply engrained in me from the moment I dipped my toes in to Bitcoin as my cold wallet was the first thing I bought before anything else.

Sucked in by the opportunity to earn some interest on my sats, I have been lending out my BTC on a couple of CeFi platforms to earn interest on it so I can get more sats but over the last few months, I’ve become more and more uneasy about what happens if these companies have to close due to regulation.

I keep the majority of my stack on cold storage of course but that small amount I have out in these 3rd party companies, I kinda want it back as once you learn the basics of self-custody, it really isn’t that hard.

Although I won’t be getting any sats passively, when the interest is between 2-6% of a small amount, I don’t feel like it’s worth the risk, especially when the average fiat price of Bitcoin has gone up by 200% per year since its inception!

Recently, the USA tried to sneak in a regulatory bill where they basically painted a rather broad brush stroke over the whole crypto space. This won’t affect me too much directly with the Bitcoin holdings in self-custody but instead, it would affect the US companies that I earn interest on with a real possibility they might be forced to shut down.

This includes US based exchanges as well and so if you have any Bitcoin on exchanges or 3rd party companies where you don’t own the private keys to your Bitcoin wallet, then you must love taking risks!

For me, I’ve decided to change the percentage of what I have in cold storage compared to having out there on 3rd party lending apps from about 70/30 to 90/10, with the 90% going in to deep freeze where I’m not even going to look at it for 10 years.

As I’ve been reading some of Che’s posts and seeing his success with Liquid Network and HODLHODL, it’s made me think about other options. These 2nd layer solutions provide lending or exchange services whilst keeping access to your keys and coins and as with anything, to understand it more, you need to dive in and use it!

So I’ll be taking that remaining 10% and spread it out over various Bitcoin dapps and see how it goes.

This may seem like a knee jerk reaction to FUD but truth be told, once you get used to owning your BTC with your own wallet, giving control of it back over to some 3rd party who’s biggest risk is regulation because they sh*tcoin makes me feel a little uneasy. I have worked hard to get these sats and I’m gonna keep a hold of them! If I lose out on 4-6% then I don’t mind, there are other methods to earn sats passively and DCA is working a treat.

The UK usually follows what US does in terms of regulation so will not be surprised if our good friends in Westminster announce something similar so I’d get yourself a cold wallet and learn how to practice safe Bitcoin hey!