Bitcoins Energy Use Is A Force For Good

Home » Articles » Bitcoins Energy Use Is A Force For Good 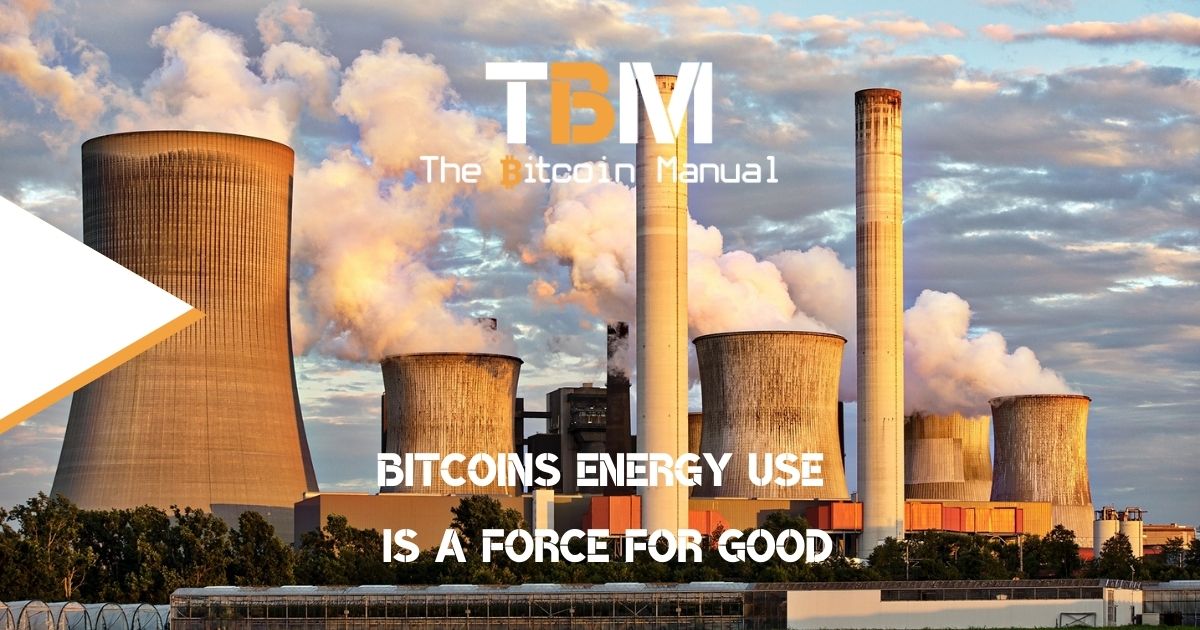 As a Bitcoiner, you tend to paint a target on your back for criticism; yes, I am outspoken about my passion for Bitcoin and the value a Bitcoin standard could bring. In my time as a Bitcoiner, I’ve had plenty of objections thrown at me on why I am wrong.

I tend to brush it off and focus on my stacking and take the arguments pretty lightly. I am openly guilty of cheerleading BTC and meme’ing NGU and HFSP.

Still, I am more excited about the level playing field Bitcoin brings to the labour market and the hurdle rate for productivity it provides, which I think will purge misallocation of resources from the market faster than in the fiat system.

Bitcoin is my preferred unit of account and a savings technology; I rely on it to store my excess productivity. I bust my ass every day in my job to provide value for my clients, and in return, I am forcibly paid in a unit of account that loses its value faster than I can get it out of the ATM.

So I choose to switch it into money I can save since I am not advocating for needless consumption. Bitcoin is superior savings tech and has proven superior to any local financial products I can access. I am not part of the elite class with access to the best financial programs and services; I am just a working-class guy trying to save up and eventually accumulate other assets I may need in the future.

I see the good in Bitcoin and I’ve moved past the baseless criticisms, however, one thing has stuck with me, and it’s this Bitcoin is a waste of energy narrative. It’s been there for some time, and in recent months, it probably got its all-time high when my former countryman Elon Musk, decided to claim that Bitcoin mining is dirty and harmful to the environment. A man with that much mindless support would always make waves; now I have nothing against Elon Fanboys repeating things they don’t understand; that’s just a failure of the education system.

What I do have a problem with is these so-called economists and intellectuals, the Ph.D. holders who are fiat funded to spin up reports that are entirely misleading and purposefully tell half the story. They provide a false sense of confidence to the narrative that Bitcoin is a waste of energy, and I’ve personally seen these reports cited several times and going uncontested.

We are taking down the energy waste narrative.

Since the Elon energy craze, we’ve seen Michael Saylor respond by forming a mining council, which I don’t care about; I honestly don’t see the point of it apart from appeasing people we shouldn’t have to calm in the first place.

Then we saw more of the stories of miners moving to green, energy like hydro; then we saw the promotion of stranded or wasted energy being turned into Bitcoin.

These operations were already in the works; they got more publicity because Bitcoiners felt the need to attack the narrative that mining is wasteful.

These are all significant initiatives and help with the energy mix of Bitcoin. Still, it’s never going to stop the fact that the Bitcoin network can and will require more energy to keep running into the future, a fact we should be honest about.

The fact is Bitcoin running on fossil fuel energy is NOT a bad thing; I would consider it good energy housekeeping; in fact, I would say it would be irresponsible for energy producers not to consider Bitcoin as an alternative byproduct for their energy.

But we hear the argument all the time; Bitcoin uses as much energy as X country, mic drop, not quite. When people quote the amount of energy Bitcoin uses and compares it to certain countries or regions, they do it in a way that discounts the fact that energy was purchased on the open market.

A producer willfully sold that energy to a Bitcoin miner because they were the most profitable sale or the buyer of last resort. Bitcoin mining did not “steal” any energy; it was bought and paid for with profits from mining.

Bitcoin’s profitability hurdle rate acts as a white blood cell of the energy market, ridding the world of anything that wants to use energy for unproductive means. It sets a floor and says if you’re not more profitable or constructive, you are a parasite on the energy market.

To me, this brings efficiency to energy usage and ensures that less of the world’s productive energy goes to waste but is stored for future consumption; Bitcoin is the battery Elon Musk could never have created with Tesla.

Despite the arguments of Bitcoin improving its energy mix, the fact that it provides a floor for unused energy, some are still not satisfied. You could optimise Bitcoin mining to its maximum, and they would still hate it; why?

Not because Bitcoin uses a lot of energy, but because these arguments are based on the fact that Bitcoin provides no value. We’re spending all this energy to create digital tokens on a blockchain; what a waste?

Why would you need Bitcoin, you have assets, and you have your Dollar, Pound or Euro. The fact is that’s NOT how the majority of the world lives; the rest of us, 80% plus living in developing countries, don’t have that luxury.

The cost of “stable” currencies on the fiat standard over the last 50 years may not be visible in the countries that designed the system. They’ve set it up in a way that they offshore the volatility of the countries like my own. I am not saying we don’t have incompetent governments and problems of our own, we do, but this beggar they neighbour system of forced debasement only extracts wealth from developing nations. It migrates it to developed nations at little to no cost.

The sad thing about this is that as the fiat system continues to eat itself, that volatility eventually finds itself coming back to those developed nations. We see poverty increase in the G7 countries, and if you cannot recognise these issues when they’re on your doorstep, then when will you?

The same way Bitcoin has been a savings tool for me in the third world, it can be for those who aren’t lucky enough to be closer to the money printers in the first world; they too have the same opportunities I have, I may have less time than these citizens before our currency completely collapses, but the window remains open.

No one cares about the totem pole as long as they are not at the bottom, which I guess is human nature but doesn’t make it any more palatable for me.

Let us all compete, and may the best capital allocators and productive members of society prosper.

Why did I choose to save in Bitcoin?

Can you name me anything else that can provide me with these benefits and that I can acquire for $1 as my barrier to entry? What’s your solution, if not Bitcoin? I’d love to hear it; I’m all ears.

The energy FUD is an attack on humanity.

When I hear someone say Bitcoin is an ecological disaster, that it’s a waste of energy and that it does nothing for the world, I cannot help but take it as a personal attack. For someone who had no hope of securing assets or hedging against currency debasement, Bitcoin is a valuable tool. It allows me to save and store my wealth.

When I hear people attack Bitcoin for its waste of energy, I hear them say:

When I hear Bitcoin is a waste of energy, I hear you should never be allowed to compete in the market for resources and have the ability to compete internationally. I hear someone speaking as a fiat protection racket who doesn’t want to see the day the rest of the world can optimise and take advantage of their capital, resources, land, and labour and fund their ideas.

I see a coward that realises proof of work means actually providing value in the marketplace and subconsciously realising they offer very little value apart from being close to those that arbitrary reallocate fiat.

Attacking Bitcoin for its energy consumption and claiming it’s a waste is an attack on my fundamental human right to exist and desire to prosper by the sweat of my brow. I think it’s a shameful and anti-human stance, and those who have pushed this agenda should think about why they don’t want to back the productivity the rest of the world can unlock with the help of Bitcoin.