It’s Not Too Late To Buy Bitcoin

Home » Articles » It’s Not Too Late To Buy Bitcoin 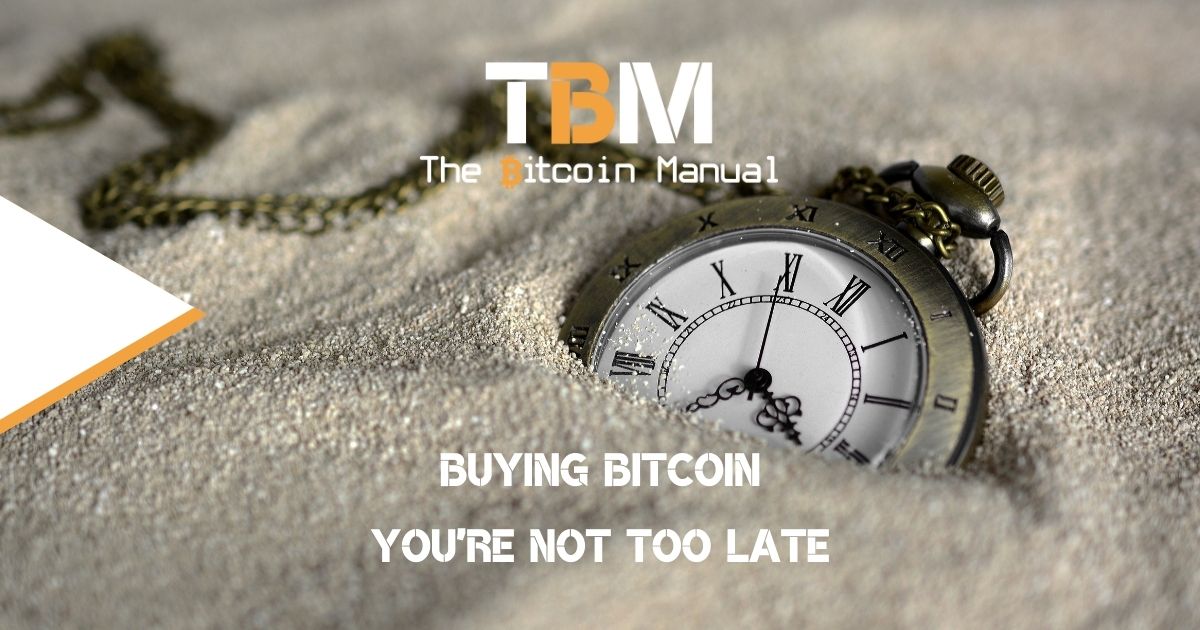 Once Bitcoin begins to click for you, it’s pretty hard to shut up about it, you’ll grab anyone’s ear who is willing to listen, and you’re hoping to lead them to the conclusions you’ve reached over what was probably months if not years. Bitcoin is minted every 10 minutes, but Bitoiners, I would say, are minted every four years; it takes a complete halving cycle for you to research, get skin the game, come to the right questions, and dive down the rabbit hole.

That’s not to say you’re a fully-fledged orange piller, but it does give you an excellent primer to survive in the ecosystem and understand the content and topics thrown around. So if it does take most of us years to align with the Bitcoin standard, why are we so impatient with noobs, normies, and precoiners?

We each have our path to walk, our mistakes to make, and to find the message that resonates with us before moving towards a Bitcoin standard. For most looking in from the outside, they see an asset that continues to appreciate at a price but with the ebbs and flows of volatility. Since financial markets have been somewhat nerfed through QE and the systemic reliance on pension fund obligations, people are not used to what a functional free market looks like, which scares them off.

Show me a no-coiner, and I am sure they will have a myriad of reasons why they would not purchase and own any Bitcoin. It’s up to educators in the space to dispel the myths they have and give them concrete answers to their objections.

One of the popular objections I am faced with is that it’s “too late” to get into Bitcoin. All the gains have been made, and its boomer coin, it’s a crowded trade; there are better investments or shitcoins with the promise of crazy returns.

Number go up technology versus number go down technology.

The way fiat money works have polluted the mind to think that this is inherently how money works; it’s meant to lose value over time, so you’re in a constant rat race. The fact is governments have broken away from the store of value aspect of money to enrich themselves and maintain control.

Therefore the production of goods and services outpaces the production of money, and you have deflation. Bitcoin mirrors all the attributes of fiat currency in terms of the medium of exchange and unit of account but brings back and supercharges the store of value aspect that we saw under a gold standard.

As Bitcoin continues on its path, it would require fewer units of satoshis to acquire goods and services; this is NGU (Number go up) technology at its base.

Getting over unit bias.

Since many of us still think in terms of our local currency, you’re still attached to the value that number represents. We know 1 million USD is better than 1 million Japanese Yen in terms of purchasing power. We know they are at a current market value, both more valuable than 1 million satoshis.

But what if I told you, you’re not interested in money and the amount of money you have, but you’re interested in what those units can give you access to in the future. The reason we invest and save is so that we have these units of measurement we can exchange in the future for goods and services.

If you have to ask yourself in 10, 20, 30 years, which unit of account would buy you more stuff than it does today, would it be the

I think at this point it’s a near certainty that the satoshis would be the better option, saving in the long term.

Bitcoin reaching any price in USD, ZAR, CAD, AUD, EUR, etc., it’s almost irrelevant, yes we cheer it on as a primary measurement of success in the short term, but that’s not Bitcoins’ end goal. What you should be looking at is how much less Bitcoin you need to spend in the future to get that car, home, food, education etc.

Bitcoin is NOT a get rich quick scheme.

The early stories of Bitcoin millionaires from a few dollars are long gone; they were the early adopters and far out the risk curve when the upside was millions of percent. That is not to say Bitcoin doesn’t have several multiples to appreciate in over the next ten years, it certainly does, but it’s not a get rich quick scheme; it’s the savings account we’ve all been yearning for, but banks could never offer us.

You’re not too late.

The idea of being too late to Bitcoin is like saying you’re too late to money. It’s like saying I wish I had been born in the 1960s before we went off the gold standard so I could get in on all that purchasing power before the record debasement we’ve seen in the last 50 years. No one thinks like that; we can’t choose when we are born.

Bitcoin is a parallel unit of account; you can be in both the fiat and Bitcoin camp. We all need fiat savings to run our modern lives, and having Bitcoin savings is simply another unit of account to save the value you create in the world.

It’s never to late to learn how to hodl.