Retail Unit Bias And The Facts Of Shitcoin Trading 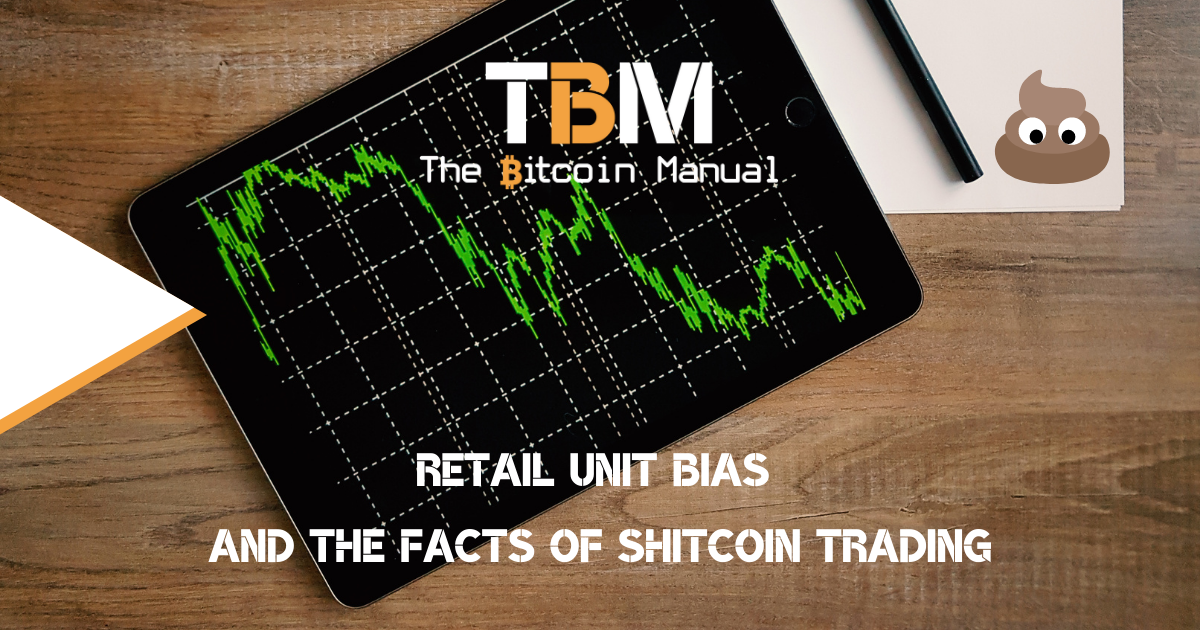 Bitcoin has opened up a world of possibilities, freeing us from the monetary policies of our governments and the debt-funded system that is modern-day banking. Bitcoin achieved this through the use of a blockchain, a concept that now seems all too familiar if you’ve hung around long enough. As with most successful inventions, there will be copycats trying to apply the solution to a different problem, and many don’t require blockchain in any case.

But this is how we humans learn via negativa; we have to fuck up in real-time to see something doesn’t work before we check it off our list, and the boom in the blockchain space is that playing itself out. There has been and will be countless failures in trying to reproduce Bitcoin or some niche application of Bitcoin.

If you’ve shitcoined before, you’d know the kinds of pitches I am talking about, and these altcoin gems or low cap diamonds are all fictitious promises preying on people who don’t yet understand Bitcoin’s number go up technology and feel they are too late to invest.

I’ve got shitcoiner friends, I’ve dealt with shitcoiners by the bucket load, I have shitcoined myself, so I think it’s safe to say I can talk because I’ve walked the path and got rekt to prove it. The idea of getting in first on the next Bitcoin is somewhat of a laughable thought process. Are you going to get in

No, once a solution solves a problem for the market, it becomes widely adopted and rules that market. Bitcoin has already won and will continue to outpace anything with an inferior monetary policy, security protocol, and cost basis to create.

Sadly these coins are all optimising for failure by trying to be smarter than the apparent limitations of blockchain. The solution is more often than not more centralisation, so what’s the point? Then centralise the entire process and provide the best service to the user.

The thing is, all these other protocols are in a race to centralisation and will do anything to 1 up one another in the short term, a game that BTC does not play.

Cryptocurrency is the wild west; there is no regulation, there is no consumer protection, it’s just you, your money, and you’re reasoning skills. Living in a world where the government and bank did all the thinking for you and assumed all the liability, risk, and trust, most retail investors have no clue the level of risk they take when they buy, trade, or yield farm shitcoins.

No one will stop you; the other shitcoiners will encourage you because they need new bag holders. After all, you cannot taper a Ponzi.

As a Bitcoiner, I don’t care if you don’t want, own or buy Bitcoin; I will do it regardless. I don’t need anyone to validate my purchase for me; I did the research and got there over many years. Even if BTC doesn’t move an inch from today’s price in purchasing power, it’s done what it promised, preserved my savings, and its other properties continue to work, like being a unit of account for me and a medium of exchange.

A shitcoiner thinks they’re more intelligent than the Bitcoin standard; they’re going to hedge their bets and diversify by buying all the coins that have already been lost to Bitcoin.

FYI diversification is not about buying the losers in an asset class, it’s about backing the winners in the non-correlated asset classes, but that’s a lesson for another day.

Now that they’ve bought these doomed to fail projects, they need to vindicate their decision by latching on to others who have made a similar mistake, and that’s where the community comes in. Most shitcoin communities sound like cults or addicts who need another fix; they never question anything; all there are there for is defending the mistake they made.

BTC is a boomer coin, and the best gains are behind it; this new coin will be 50 or 100x because its market cap is so small. Yes, the market cap is tiny, but what is the total addressable market for this coin? Did you ever ask that? With all these other shitcoins competing for BTC scraps, there’s a severe limitation on your market cap theory there.

Then there’s the unit bias; we’ve been conditioned to want a whole of everything; a whole is better than a half of a fraction. People would instead want an entire shit-covered pizza than a fraction of healthy and hearty nourishment.

Being a fiat junkie, your low-time preference mindset will always be driven by greed, and your limited understanding of math will push you to feel that more of something is better. The fact is these units are pointless; you need to focus on the purchasing power per unit.

If you can’t get over the psychological hump of owning a fraction of Bitcoin, there’s still hope, start denominating in sats, and it may help you see the light.

Bitcoin has been running for 12 years now, and not without plenty of attacks against it; it has proven to be robust, and the longer it remains, the stronger the lindy effect becomes. That brings more confidence, more investors, more usage, more businesses built on top of it, and more activity and velocity of units. The more people pulled into the Bitcoin system and have skin in the game, the greater the layer of protection on the network.

Your shitcoin doesn’t have that; it has no army of nodes running the code, it has no miners providing hashing power. It is just like a team of coders and venture capital funding. I would know I bought a bunch of shitcoins becak in the day; some of them even got shut down by the SEC.

Honestly, you have no idea the quality of people coming into the blockchain space and are willing to sell you any pitch to get your money or Bitcoin and leave you with a useless token.

Most retail traders are highly emotional because they work for their money. You feel a sense of loss or pride because of the value of your decision in fiat denomination. When you are motivated by fear or greed, you tend to make the worst decisions.

People often talk about I will sell at X price, but when it reaches the price, they don’t do it out of greed; there’s always another leg up, and you can get more juice out of it, and the majority of retail WILL never sell at the top, that’s a fact.

Trading like any skill comes with experience, and you learn to quiet your emotions, you learn to plan exits, you learn to stagger your exit and take profits, but retail often thinks it an in at this price out at that. You’re walking away from a millionaire; it doesn’t work that way.

This one tends to catch a lot of shitcoiners off guard, now. If you’re shitcoining in smaller positions, this won’t affect you since there should be another person willing to risk a small amount of capital to take the coins off your hand.

But then you get the big bang holders, those who purchased thousands of a coin, and they’re hoping if it goes to X price, they walk away from a millionaire. Then it hits X price, and they try to sell, but hey, why am I not getting my millions.

It’s called illiquidity; just because you bought 1 million coins and they are now worth a dollar each, it does not mean there’s a buy order for a million dollars worth. It could be a buy order of 10 000 at $1, so no, you’re not a millionaire.

Illiquidity is a cruel mistress, and slippage trying to dump at a spot will leave you with smaller bags than you thought you would walk away with, you genius trader you.

If by some miracle you were able to sell at the top and bagged a pair with enough liquidity, you got the good old government ready and waiting in the wings to take their share of your profits.

Since many shitcoin traders happen within the space of a year, you’re often paying the highest capital gains tax, shitcoiners aren’t exactly known for holding. Since your coin may never reach that price again, you are often forced to exit and take that capital gain tax pain.

Trying to beat the hodl rate.

Trying to beat the compound growth rate of Bitcoin, plus the ability to dollar cost average and pick up dips in the market, is extremely difficult, especially without leverage. Most traders will not outperform the buy and hodl strategy nor leverage the tax efficiencies of borrowing against your Bitcoin.

I call trying to out-trade Bitcoin the widow trade; it will leave you in a body bag. Most shitcoiners are trying their best to end up with less value than their Bitcoin holder counterparts.

You don’t have to believe me; I would encourage you to take your buy-in dates, check the Bitcoin price at those dates and see if you ended up with more or less in satoshi value at the end of your trade.

As a holder, I don’t need to watch the market, set limit orders, worry if the project I invested in will change their monetary policy or their next fork will be a success or failure. I can go out, do my work and buy Bitcoin with peace of mind that I will still out-trade you.

I know reading this might hurt; I, too, had to face the nature of my shitcoinery, and I paid the price for it. I don’t say these things because I am salty and hate the gains you’re making. I say this out of love because I want you to make even more money than you’re already are by getting the biggest problem to prosperity out of the way, your current mindset.