Different Characters In The Bitcoin World 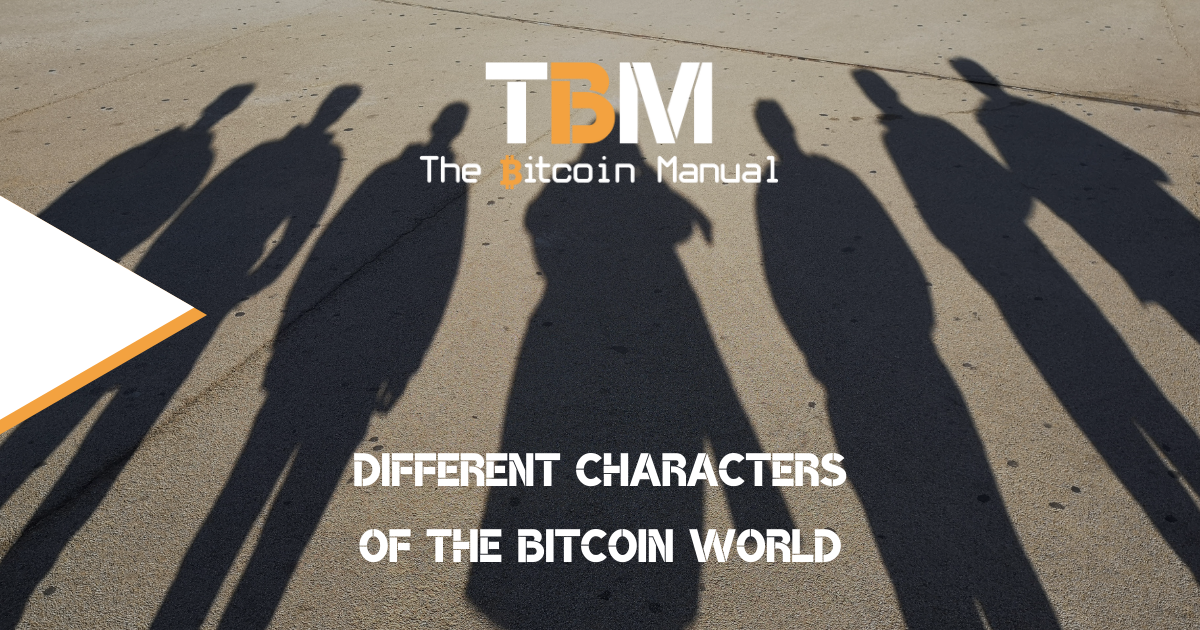 We were discussing recently in the Bitcoin Pioneer Telegram group about different characters or personalities that we have come across and on my journey through the orange universe over the last 3 and a half years, I’ve noticed that there’s all kinds of characters who exist here, which is how it should be!

Bitcoin is for everyone after all.

I’ve met a lot of people both offline and online who are at various stages of their Bitcoin journey and this article is a follow-on from my earlier one about the different phases of learning Bitcoin.

Here’s what I’ve got so far as I try to figure out some of the slang terms that get brandished about in this space so bear with me if my interpretations aren’t fully on point:

Pre-coiner – have never even heard of Bitcoin and their knowledge is greener than Bitcoin mining’s renewable energy sources!

No-coiner – are aware of Bitcoin but they are against it for some reason or another. Maybe heard of it in the early days, didn’t get involved or often believes some form of FUD and comes across as being a bit “salty” whilst presenting poorly researched points.

Speculator – heard of Bitcoin and they dabble a bit with it in the short term but don’t treat it as anything much more than a highly volatile stock.

Normie – similar to the Speculator in that they have heard of Bitcoin but as this is a totally different asset class of its own, normies try to apply traditional finance thinking to it and have sat out for one reason or another.

Beginner/Noob – has bought Bitcoin as they’ve heard about it through friends or family and is dipping their toes in because they are curious about what Bitcoin is all about. They want to go further than just speculation and the noob is possibly in their first few weeks or months. Having said that, I still think I’m a noob after 3.5 years!

FOMOer – heard about Bitcoin because they read some articles about its price skyrocketing and instantly bought without looking any further in to it. They now have a permanent heart rate of above 200 BPM. Will likely pay the price by panic selling as their fiat value of BTC goes down and then become a…

Permabear – Is, or was, in the “crypto” space, likely a shitcoiner, shiller, gold bug or worse, fiat bug, or got burned by buying at the top of a bull market. Always believes Bitcoin “will go to 0” and that it “has no use case” and all that other nonsense.

Shitcoiner – Someone who has been trying to recoup losses from FOMOing in to coins other than BTC or is in other coins that aren’t Bitcoin. Usually just sees the fiat value of their shitcoin and doesn’t consider the sats value. Will post all the time about how their coin will go to the moon and that they are up millions of %. Deary me…

Permabull – Forever optimistic and clutching on to any good news about Bitcoin and spins everything around to put a positive light on Bitcoin. These are the kinds of people you need to be around on a red candle day!

HODLer/DCA-er – Has no intention of selling Bitcoin ever, in this for the long term and sees every dip in price as a buying opportunity. They use dollar cost averaging to buy every day, week or month to add to their stack but the price they got in at is pretty irrelevant, only thing they are interested in is stacking for the long term.

Maxis – Believe fervently there is only one coin worth having – Bitcoin (and they’d be right). Fully believe in its disruptive technology, the development happening on it makes all other coins redundant and will defend Bitcoin passionately.

Bitcoin Is For Everyone

For me, I probably exhibit a few of the personalities above as I’ve been on my journey through Bitcoin but am mostly in the HODLer/DCA-er camp, focusing on stacking as many sats as possible.

I’ve probably missed some personalities off that I haven’t come across yet or you might have slightly different definitions/interpretations of these (if there are already some definitions out there) but the reality is, it doesn’t matter if you fit in any of these.

Bitcoin is blockchain technology and it has no feelings! However, it is open to anyone who wants to get involved and buy Bitcoin.

It always surprises me that more people I speak to have heard of Bitcoin than I first thought and actually have some sats themselves but just keep quiet about it. Just goes to show that you don’t always need to broadcast everything like a lot of these “influencers” and social media types like to do, which is definitely not practicing safe Bitcoin.

Maybe the “Silent Stackers” could be another one!

Anyway, do you see yourself exhibit any of these personalities in Bitcoin? Have you met any others? Let me know in the comments below!