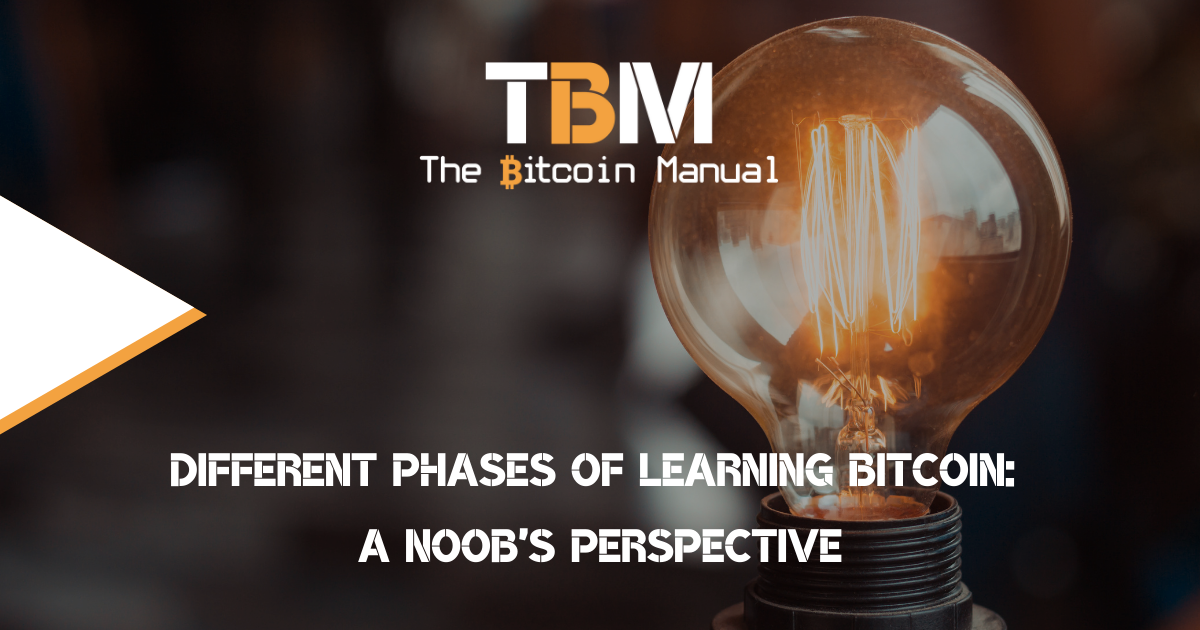 I’ve been bumbling about Bitcoin like a drunken bee since Christmas 2017 and first heard of it back in 2012. Fast forward to today and there’s an ever growing amount of development going on that it makes my head spin just reading about it!

During this time, there have definitely been different phases in my Bitcoin (and crypto) journey that I thought I’d share so you can see how your journey compares! Bitcoin isn’t something that you will just get over night. It takes time, open-mindedness, making mistakes and patience until the penny drops – play the long game!

Like most normal folks, the dismissive phase usually hits first and I went through this phase back in 2012 when I first heard of Bitcoin. An ex-banker was telling me all about it and it was way over my head at a temping job.

I tried to look for things online at the time to help me understand it more but it was all technical jargon and in the end, I dismissed it as life circumstances dictated play.

It wasn’t until around November 2017 that I heard about Bitcoin and crypto again from some work colleagues who never really mentioned it before. That’s when I thought I’d have a look again, see what was going on. The price was sky-rocketing up to about $15,000 at the time!

Facebook friends were talking about it, I reached out to ask how I can buy it as I wanted to jump right in – emotions were high, I didn’t want to miss out on this having heard about it in Phase 1! All these really cool exciting projects to pile money into that were going to “change the world” until…

2 months later, the crashes started happening at the beginning of 2018 and lasted throughout that year. I basically saw the fiat value of everything I bought get wiped out. Massive 80% year long correction/bear market and a lot of tokens disappeared, along with some exchanges, the feeling of definitely being scammed and it was a tough time to be in the space!

At this phase, it’s very hard not to feel anything negative towards Bitcoin and crypto when you got in at the top.

I was lucky enough that there wasn’t a pandemic happening at the time so decided to go travelling and take a break from it all which did wonders for my mental health! This really helped clear the head and allowed me to come back with a plan and re-focus after strong lessons in Phase 3.

It is definitely worth taking a break and stepping away for your own sake.

After I came back, I started doing more research on certain projects but armed with a slightly more critical mind. I was able to cut through a lot of the noise. Sadly, some shitcoins made it through the net and I am still paying the price of decisions past.

It wasn’t until April 2020 after the covid crash that the penny dropped about Bitcoin in entirety. All this time I’d been frothing at the mouth trying to be fiat rich by striking it lucky on some lower cap shitcoins when the answer was staring me in the face this whole time.

Once I read and immersed myself in Bitcoin content, development and apps, seeing the macro movement of large companies and billionaires working their way in. I started actually learning about the workings of fiat money and speaking to friends all around the world about how inflation is screwing everyone.

The penny dropped and I realised that there really is no point in focusing anywhere else other than Bitcoin.

With anything new, the learning curve is pretty much vertical at first before it starts sinking in but have an open mind when you start out. Learning about the fundamentals of Bitcoin is something I’m still getting to grips with and I still consider myself a noob – I’m fine with that!

As I’ve immersed myself in Bitcoin and the crypto industry on the whole over the last 3.5 years, I realise that my understanding of money was piss poor at best – this is the next step as you dive down the rabbit hole!

If I were to ask you to describe money, how it works, where it comes from and why we have it, would you be able to?

Money or finance is not something we really get taught at school at all. Yet, when we finish school, this brand new concept gets thrown at us where we need to start earning it and using it pay bills, buy services and products and whatnot.

Understanding money is the first step in this all as that really helps with understanding what Bitcoin is.

Thankfully, we had a guest blog recently on TBM from @j-ryze who beautifully described the history of money in his blog, which you can read here.

Do Your Own Research

Don’t just take my word for it in this one blog. We’re adding content and pages here on The Bitcoin Manual to help break down complexities around the technical side of Bitcoin but also give you a strong foundation so you can do your own research and build on it!

This was one of the first things that hit me after hearing about how so many people can’t have access to bank accounts and even those that do have transactions blocked such as customers who wanted to spend THEIR money on Bitcoin but the banks blocked them!

With Bitcoin, this doesn’t happen when you own your own Bitcoin wallet. All you need is the receiving Bitcoin address, you authorise the payment and about 10 minutes later it’s fully completed. No questions asked.

Expanding on the above point, there is no-one who can stop you from sending or receiving Bitcoin – it’s something I like a lot about there being no 3rd party in this decentralised money.

Also, I know that there will be only 21 million Bitcoins in existence, with each Bitcoin being divided into 100 million smaller denominations and I know how the inflation works up until all 21 million coins are created.

No centralised authority can come along and decide to flood the market with more coins, diluting their value and making me lose purchasing power at the press of a button.

This is thanks to the transparent nature of blockchain technology and the way Bitcoin was made. Add to that the vast amount of blockchain analytics that happens on a daily basis and you know exactly what’s going on with it all!

With all of this being said, Bitcoin has only been around since 2009 and it’s still new but it is starting to be more adopted around the world. Expect bumps along the way in terms of price, regulation, social scrutiny and mainstream media FUD.

This is what happens when a disruptive technology comes along. If you were around when television, radio, internet and mobile/smart phones came about, you know there were bumps there too in the beginning.

Play the long game and make your own journey!

What phase are you in? Are there any phases not mentioned here that you have experienced? Let me know in the comments below!