Why Bitcoiners Should Self Custody

Home » Articles » Why Bitcoiners Should Self Custody 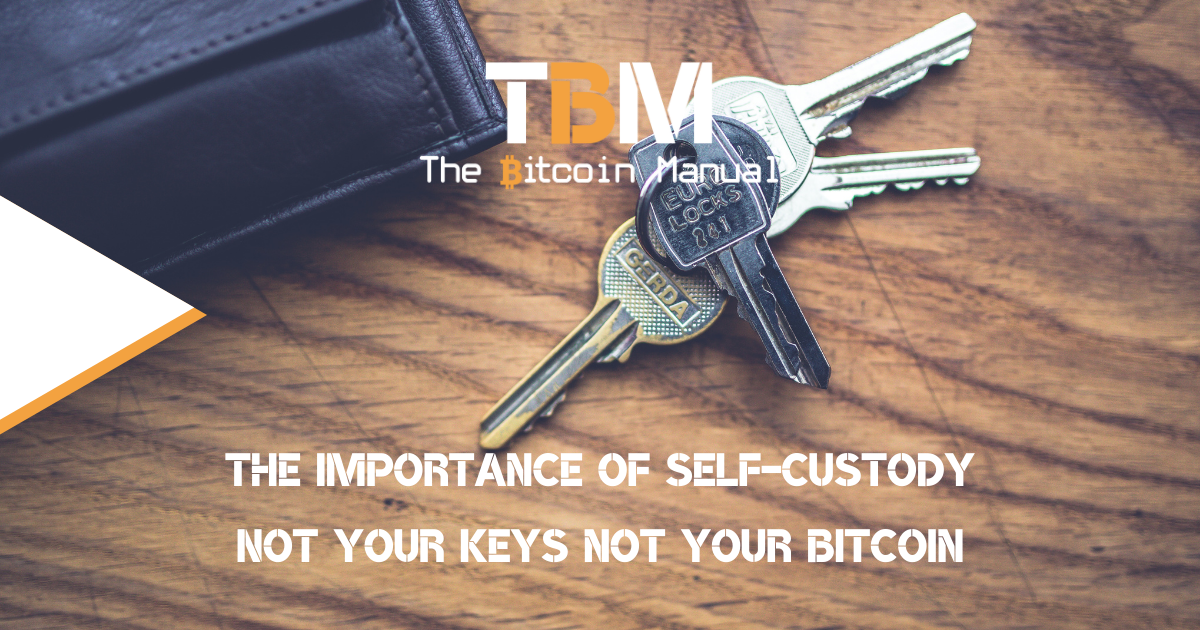 Growing up, I’ve always seen finance as a 3rd party transaction; they keep my money, they invest my money, they secure my money, they grant me access to my money. I think that is the reality anyone with a bank account accepts but is it the norm? Previous generations of my family were used to working primarily in cash with very little need for a bank account.

The idea of trusting a third party when it comes to finance and money is normalised I can understand why many people choose to buy bitcoin through an exchange or with CEFI platforms.

However, Bitcoin is NOT like fiat and leaving an asset of this value with someone else opens you up to more risk than you think.

As we say in Bitcoin, “Not your keys, Not your coins”, which refers to the fact that if YOU aren’t the one holding the passphrase to the wallet, you don’t own those Bitcoin.

Bitcoin is the FIRST digital asset you can take physical ownership of, and the best way to hold your bitcoin is in your wallet.

This way, you’ll sleep soundly knowing that only you can access your Bitcoin.

Bitcoin, or rather the greater cryptocurrency ecosystem, don’t naturally attract the most charitable of people to conduct business in this sector. The lack of regulation makes for a wild west where people assume that the protections afforded to them by a controlled fiat system apply to Bitcoin.

The short answer is it doesn’t! We’ve seen plenty of examples in the past of exchanges that have gone the way of the Dodo or Bernie Madoff. When you leave your Bitcoin on an exchange, you leave yourself open to some of the following.

With exchange custody, you’re trusting someone else to hold your keys. What you own is a claim, a promise that they’ll let you withdraw your Bitcoin when you ask. Trusting your Bitcoin with someone else means they can easily pack up their bags, move all that Bitcoin to a wallet they have the keys for and book a holiday never to return.

Bitcoin is NOT like fiat; these aren’t simple ledger entries that can be spin-up by banks and changes as they see fit; all transactions eventually need to be confirmed by the blockchain. Depending on how these companies hold their Bitcoin and manage their keys, they could cock it up, lose keys or expose keys to other third parties who could take advantage of this breach or lack of security.

Running an exchange can seem like a licence to print money with all the fees they pull in daily. The more exchanges chase fees, the more shitcoins they tend to list. The more shitcoins they list, the sloppier their security becomes and running nodes and managing keys can become a bit of a pain; this exposes your coins to additional risk.

Despite what you may believe, the Bitcoin on exchanges aren’t exactly sitting around; they are being moved around all the time to try and generate returns for the exchange. Depending on how this exchange manages its funds when it comes time to pull your coins, you could have them stuck in a situation where parties they’ve borrowed to are locked in trades, and they could have issues settling your claim on time.

If word gets out, which it often does on social media, you could see a bank run on an exchange.

As Bitcoin continues to eat fiats lunch, governments in your region could become increasingly hostile to it; we’ve already seen countries like China ban mining, Nigeria, Turkey and a host of other countries try to ban Bitcoin. Having your keys with a business operating in these countries opens you up to regulator risk and even risk of confiscation.

Banging on about self custody

As a Bitcoiner, preaching self custody is a message many want to hear and there are several objections I’ve had to deal with in the past. Perhaps some of these sound familiar to you or you’re wrestling with these issues yourself.

Bitcoin is too expensive for self custody.

I hear this argument all the time, and it’s going to become more of an issue as the on-chain fees continue to increase; what is the point of self custody if you’re being punished with high mining fees? We cannot expect people to want to use the main chain regularly, and they shouldn’t have to; block space is a scarce resource and shouldn’t be used wisely.

If you’re committed to self-custody, then there are some solutions for the little guy stacking the sats he can afford; you will have to research options available in your country. Still, the gist is that you can opt to pull your funds off an exchange into a liquid wallet or a lightning wallet. Finding businesses that support liquid or lightning and stacking your sats there will make it cheaper and easier to self custody your Bitcoin.

Once you’ve secured a more significant amount, you can always migrate it back to a main-chain wallet for additional security.

Self custody costs me money.

Geezus! There will always be another excuse, won’t there? Some people would rather complain than try to learn and take control over their lives, time, money and future. Yes, a hardware wallet costs money, but it is a negligible amount if you consider you’ll be storing your life savings on it.

Hardware wallets, like any technology, will get cheaper with time, so what’s your excuse? I am pretty sure that by the time you’ve secured your funds for a full year, the appreciation in Bitcoin would have paid for the cost of the wallet.

Hows is that for peace of mind?

But I can make a yield on my Bitcoin.

I am not opposed to anyone making more money and trying to stack more sats; by all means, do what makes you happy; just know that yield, like any investment, is a risk premium. You are being compensated for giving up ownership of your asset, and you have to make sure that your risk-reward ratios are intact.

Do I think earning a yield on your Bitcoin is terrible? Should you be lending out your entire stack? Hmmm, that’s up to your risk tolerance level, but for me, that’s far too high a price to pay.

I worked my ass off to acquire these sats, so why should I borrow them from someone else?

The way I see it, businesses need to tempt me out of holding my Bitcoin, and a 4-6% APR isn’t all that tempting to take my entire stack; sure, I can throw them a few sats and get a kickback, but ask yourself is that yield worth knowing it could all go tits up. Do you risk losing your position in an asset that continues to appreciate every year?

I apply the 80 20 rule to my Bitcoin portfolio, 80% sits in cold storage, and I am willing to risk 20%. I do rebalance as I stack to keep the ratio in proportion with my risk tolerance, and I also use more than one lending platform to distribute my risk of using CEFI services.

So yes, you can yield farm, but that doesn’t mean you shouldn’t consider self custody too.

Self custody is scary.

I get it; holding a digital asset isn’t something that comes naturally to everyone; it has yet to be normalised and can sound scary. The risks are real; you could lose your keys, you could have someone nick your passphrase or lose it in a boating accident. There is no insurance and no 3rd party to save you in these events, which can be overwhelming for some people.

But this is a gradual process; no one is asking you to put your entire net worth into Bitcoin and in a single cold storage wallet. All we’re saying is starting to get comfortable with holding your keys and taking ownership of your hands.

This could be 100 000 sats or 1 million sats; that amount is up to your financial situation, level of tech know-how and comfortably with Bitcoin. We are all in different phases of Bitcoin adoption, and there is no single path for everyone.

Freedom is scary, personal responsibility is scary and can feel unnerving, but it’s also greatly empowering. Take it from someone whose first cold storage transfer was $30; you’ll grow into it, and the more you do, the more confident and empowered you will feel.

Breaking ties with centralised services isn’t easy; the lure of convenience is intoxicating, but that doesn’t mean we should always leave all our chips on the table every time we play our hand.