Home » Articles » Bank Bail-Ins? I’ll Bail Out To Bitcoin Instead 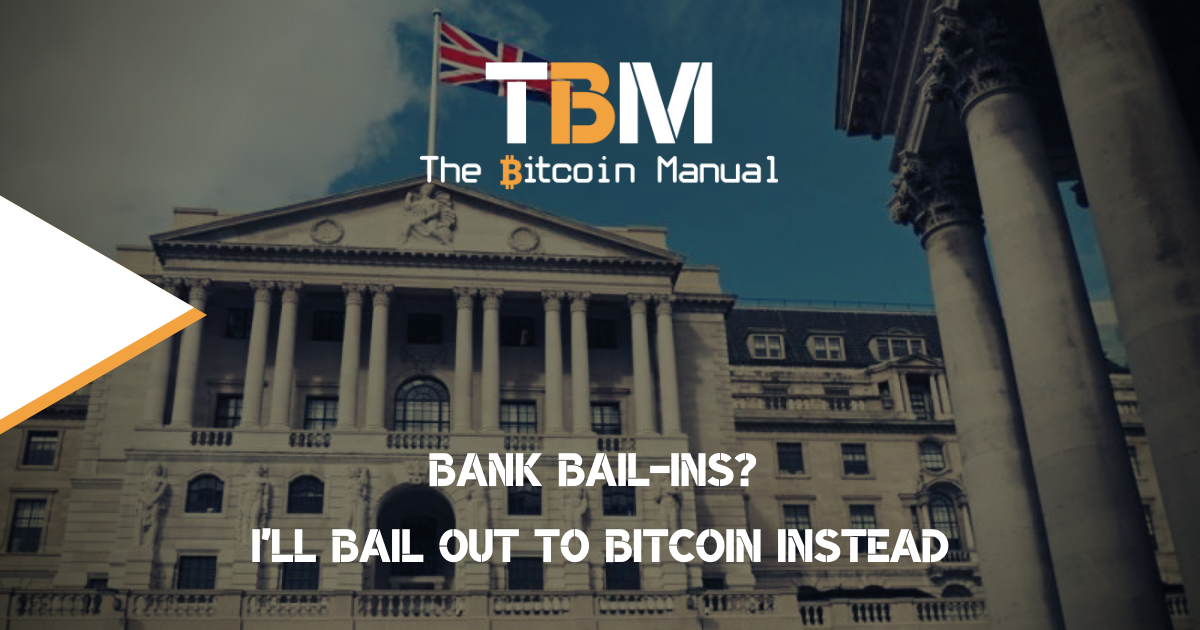 Remember the 2008 credit crunch? Not that long ago really in the grand scheme of things but I remember hearing news in Cyprus a couple of years later where people could not get access to their bank accounts. Instead, their hard earned money which they thought was safe in their bank accounts was used to help keep the banks going!

This is known as a “bail-in” where banks can just take money from depositors (i.e. you and I) to help keep them afloat. It is a law that was brought in around 2009 as a response to the credit crisis.

In other words, you work hard to earn money that goes into your bank account so you can spend it how you want, banks have bad financial practices aaaaand it’s gone!

This is different to “bail-outs” which is where the government uses taxpayer money and injects it in to the banks to keep them afloat. In 2008, a “rescue package” of around £500 billion was made available for all of the banks to tap in to but Lloyds and Royal Bank of Scotland (RBS) were the main two banks that took it here in the UK.

Apparently we were “only hours away from a breakdown of law and order” when RBS was bailed out according to ex-chancellor Alistair Darling.

Why am I telling you this?

Well, someone shared a video by Neil McCoy-Ward which caught my eye titled “Bank of England sends bail-in paperwork”. I thought I’d check it out and Neil left a link to the source article from Bank of England (BoE), which was “enlightening” to say the least!

Basically, the BoE has sent out various templates to all UK banks which outlines processes on how bail-ins can be implemented.

Bearing in mind that bail-ins and bail-outs are for crisis management, I’d say that this pretty massive development was kept well hidden from mainstream news, given that it was only published on 22nd July, 3 weeks ago.

You might be thinking that’s all well and good but we have the FSCS compensation scheme which is there to give you insurance cover up to £85,000 (at time of writing) and they say they are fully funded on their site.

True, we do have that in the UK but I couldn’t find a breakdown of how much they actually have in their reserves to compensate everyone. As already mentioned above, it’s not beyond the realms of possibility that a lot of banks fail and need bail-ins, affecting millions of UK customers who will then be making claims.

What if the FSCS needs to be bailed out as well to pay the compensation to folks like you and I? Would they even be able to pay us back?

If only they used blockchain technology so we could verify their ledgers hey?

I do agree with Neil McCoy Ward in the video though. It does seem odd that they have had time to plan and send these bail-in templates out given that they would have had their hands full keeping those printers busy over the last 18 months with £1 trillion flooding in to the UK economy!

Not Your Keys, Not Your Pennies

I’d say bail-ins are pretty bad news for anyone with a bank account, which is quite a lot of people! From Investopedia:

“With a bank bail-in, the bank uses the money of its unsecured creditors, including depositors and bondholders, to restructure their capital so it can stay afloat… The obvious risk to bank depositors is the possibility of losing a portion of their deposits.“

Seeing as we are depositors when our money is in a bank account, it sounds like the bank can literally take your money if they need to keep afloat now. In the words of Bank of England’s Chief Andrew Bailey, I guess we really “should be prepared to lose all our money!”

You know where I’m going with this…

Bail Out To Bitcoin

It’s tomfoolery like this from the banks that I really can’t see how more people don’t look to understood why Bitcoin was created and how important it is to take custody of your money. Or at least understand the concept of money.

Sure, you can withdraw cash from the bank and shove it under your pillow but as we see with inflation, the purchasing power of that cash quickly gets eroded, especially with the amount of money printing going on.

Bitcoin doesn’t have that nonsense as the economics of it are known and there won’t be more Bitcoin magically printed out of thin air. Importantly, your Bitcoin will always be yours if you self-custody, no-one can take them away from you if you practice safe Bitcoin and don’t keep all of your coins on exchanges or other third party platforms. Keep your seed phrase safely backed up and you’ll see just how empowering it is to be your own bank!

I don’t even consider “price volatility” an excuse anymore given what’s going on with the pandemic, the economy isn’t exactly stable! 1 Bitcoin will always equal 1 Bitcoin and if the shenanigans from Central Banks across the world since 2008 haven’t made you distrust them, I really don’t know what will tbh!

I’ll keep stacking sats and keeping my money safe as I bail out in to Bitcoin. I personally can’t see how Bitcoin is any less risky than keeping your money in a bank at this stage!