50 Years Of Fiat – When Bitcoin Standard? 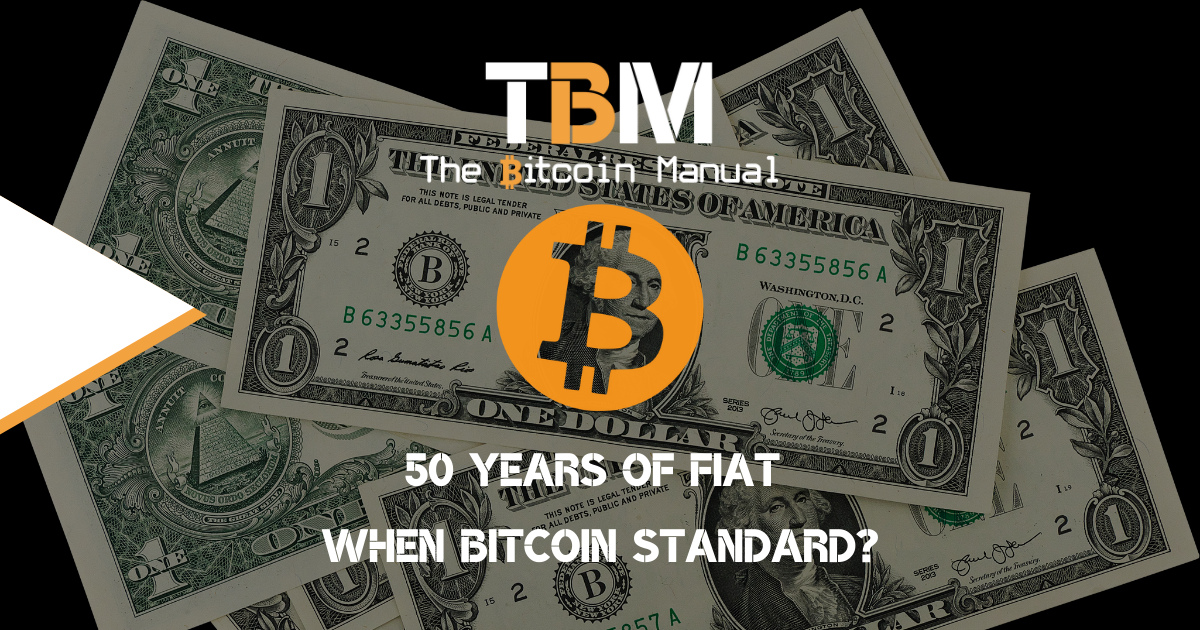 Over the last week, I saw a lot of people share the “significant milestone” of 50 years since the US Dollar (and all other fiat currencies by association) moved off the Gold Standard in a so-called “temporary measure”.

On Aug 15th 1971, President Nixon made his announcement which gave central banks more control over “managing” their currencies such as inflation, money supply and all that stuff, which was termed the Nixon Shock.

Jason Deane, who runs the Bitcoin Pioneer program in the UK, covers the history of the fiat standard beautifully in his post and J-Ryze’s guest post on TBM gives a comprehensive overview of the different money systems we’ve had over time.

The problem with moving off a currency backed by something that is relatively scarce, such as gold, meant that money now only has value because whoever is at the control center of monetary policy says it does.

“Got a debt to pay off? No worries, we’ll just print more money and dilute the existing supply even more”.

This is called inflation and you can think of it like adding water to your favourite cordial – the more water you add (money printing), the less flavour (purchasing power) your drink (money) has.

When I was at the Celsius meet last month, I was speaking to a couple and used the price of UKs favourite chocolate frog – Freddo – as an example of this inflation. People remember when Freddo was 5p a bar about 15 years ago, now it’s 26p or more although it’s still the same Freddo bar! You can insert anything in here to compare prices from any time frame really.

The point is, that’s inflation in effect, hiding in plain sight and we’re probably so used to this erosion of purchasing power that we don’t think about it or dive deeper.

This 50 year fiat anniversary prompted many in the Bitcoin sphere to point towards the way fiat currencies have been debased from actual assets, highlighting the value of things like houses and goods or services skyrocketing despite being the same bricks and mortar to what they were 12 months prior.

Is demand really that high though or are we going in to a hyperinflation phase?

According to Investopedia, for hyperinflation, the rate of price increase needs to be more than 50% per month so in the UK, judging by the value of property which has shot up by 10-15% in the year, we’re not yet.

“Official UK figures” said 2.4% to begin with this year, now it’s moving up to 4% in 2021, moving up to who knows whatever they’ll announce next… who still believes the BoE anyway, especially when they snuck out bail-in templates last month?

And this is in a relatively “strong” economy. Apparently, 25% of all US Dollars (that’s the global reserve currency by the way) were printed in the last 12-15 months. You only need to look at other countries such as Venezuela, Zimbabwe and Argentina to name a few, to see the devastating effects of hyperinflation.

You know where I’m going with this don’t you?!

Enter Bitcoin – should be pretty obvious by now once you understand the basics of it!

A decentralised monetary network with a known maximum number of coins in circulation that can’t be changed as it has already been programmed in (unless a serious amount of capital is spent to do this). Add to that it is open to everyone and anyone can own any amount they want when they self-custody with their own private keys. More importantly, you can send it to anyone in the world instantly without a 3rd party.

I’m no economist, just a normal bloke who’s done a bit of reading around, asked some questions, started to understand money a bit more and sharing my thoughts on a blog. You need to do your own research but you won’t have to look very far to see or experience the fiat shenanigans. It’s why Bitcoin makes so much sense to me and I still consider myself a noob with much to learn!

There’s an account I like to follow on Twitter that goes by the name of Priced in Bitcoin. They share interesting charts that show how other assets like your stocks, shares, property, cars, gold and other things perform when you price them in Bitcoin instead of $. When you price everything in sats, you will see some interesting trends, particularly since 2009!

Critics Will Be Critics

I’m always open to hear different views and criticism of Bitcoin but oftentimes, those who say that Bitcoin can’t be used as a currency to buy things with really haven’t understood, used or experienced the 2nd layer solutions that are already here such as Lightning Network, Liquid Network and the like.

There are apps that are being used to facilitate instant and very low fee Bitcoin transactions across the globe – I’ve used them myself for settling payments up with global projects I’ve worked on and it’s pretty straightforward really.

You just need to look at countries like El Salvador, Latin America, Nigeria, and other developments happening across Africa to see that Bitcoin IS being adopted and the people are embracing it as their fiat currencies are falling down with hyperinflation.

Then there’s the whole “energy usage” but that’s been debunked so many times now, it’s a wonder how it can still be considered an argument – I’ll point you to this deeply and thoroughly researched article from Lyn Alden which ends all energy arguments.

As further improvements and upgrades are coming to Bitcoin later in the year with Taproot to make the process more seamless, then the real fun begins.

When Bitcoin Standard? It may well be sooner than 50 years…