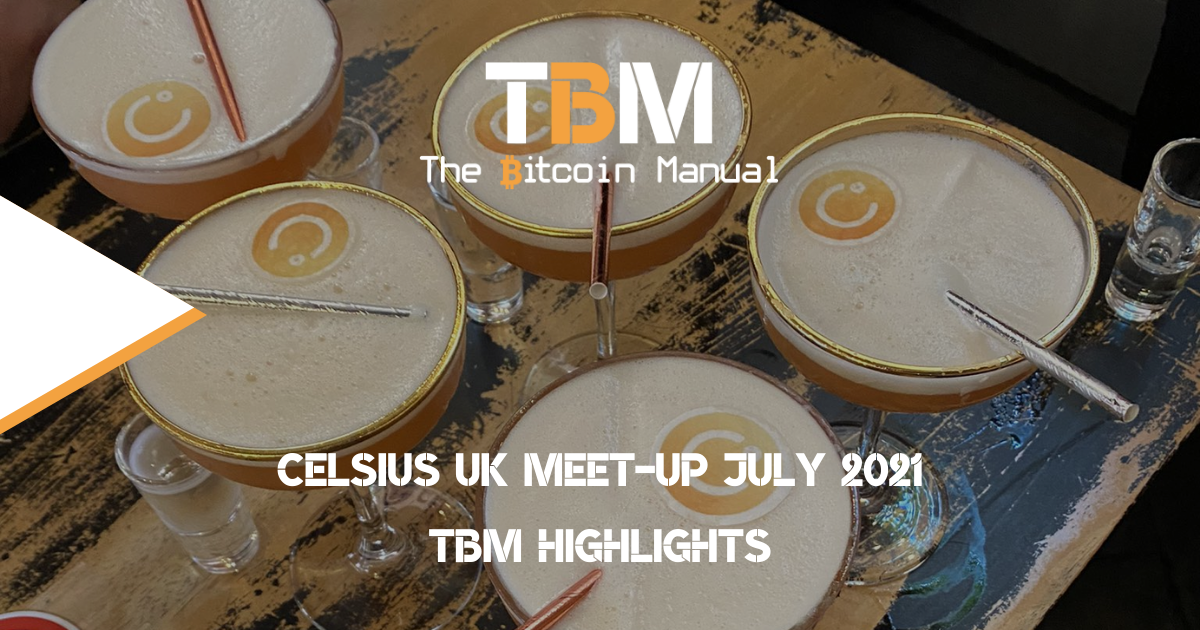 In July 2021, the Celsius UK meet-up happened in Oswestry, Shropshire where 40+ Celsians were treated to an evening of entertainment and fun-filled crypto chats! It was great to catch up with fellow enthusiasts, particularly those who were more into the Bitcoin side of things. I have dabbled with different tokens since December 2017 and can understand their appeal but in more recent times, I’ve started to focus more on Bitcoin.

Having said that, I was still inspired to hear how people have taken the brave choice of stepping out in to the wild west of crypto and turned their lives around. We need more success stories like that as opposed to mainstream media narratives and this is one of the many reasons why we wanted to start The Bitcoin Manual (TBM).

At the meet-up, the Celsians encouraged us to get TBM going after I mentioned it, especially those I spent a lot of time talking to about Bitcoin! We will be inviting a few of them here to share their Bitcoin successes in the future I’m sure!

I was having a deep discussion with one of the guys who went on stage and mentioned he bought Bitcoin back in 2012 when it was only $4! That in itself is amazing! He ended the interview saying to everyone, “Buy Bitcoin as often as you can”, which is something he still does through Celsius if I remember right! I had had a few Celtini cocktails at this point!

Over the course of the night, I heard how people’s lives have been changed dramatically over the last 18 months due to the pandemic and if they hadn’t got involved with crypto, their businesses wouldn’t be running. You can’t argue with that.

The rush for yield is what Alex Mashinsky, CEO of Celsius, has tapped in to with Celsius Network. It’s not difficult to see why the rush exists though. In fiat terms, there is next to 0% interest for savers in the UK Banks with inflation reportedly at ~2% but anyone looking to buy a house in the last 12 months would have seen house prices grow by ~10%! It’s no wonder people take a chance on yield in crypto just to keep up with this.

Sadly, it is far worse in other countries and seeing how purchasing power is being eroded away in front of our eyes due to inflation is one of the main reasons I’ve re-focused on Bitcoin.

Topics For Another Time

We had some deep discussions about chasing returns in £, thinking in terms of the Bitcoin Standard vs fiat standard and how volatility is perceived. Some of the Celsians have overseas businesses and we talked about how local economics is affecting them. Plus the developments in El Salvador with Bitcoin accepted as legal tender and the lightning network with Strike. There’s so much happening with Bitcoin alone but we’re hoping to cover as much as we can with The Bitcoin Manual and share the knowledge.

Big thanks to HODLcelsius and Knock & Snitch for organising and hosting the event! Everyone had a great time and I’m sure we’re all really looking forward to the next one! Who knows how things will be in Bitcoin & crypto by then!

British bitcoin pleb falling down the rabbit hole and willing to share every bump, scratch and knock along the way
View more articles from this author
PrevPreviousShitcoins Are A Stop-Gap Solution
NextJack Mallers The Giant SlayerNext