Bitcoin Is Not Another Network It’s A Monetary Network 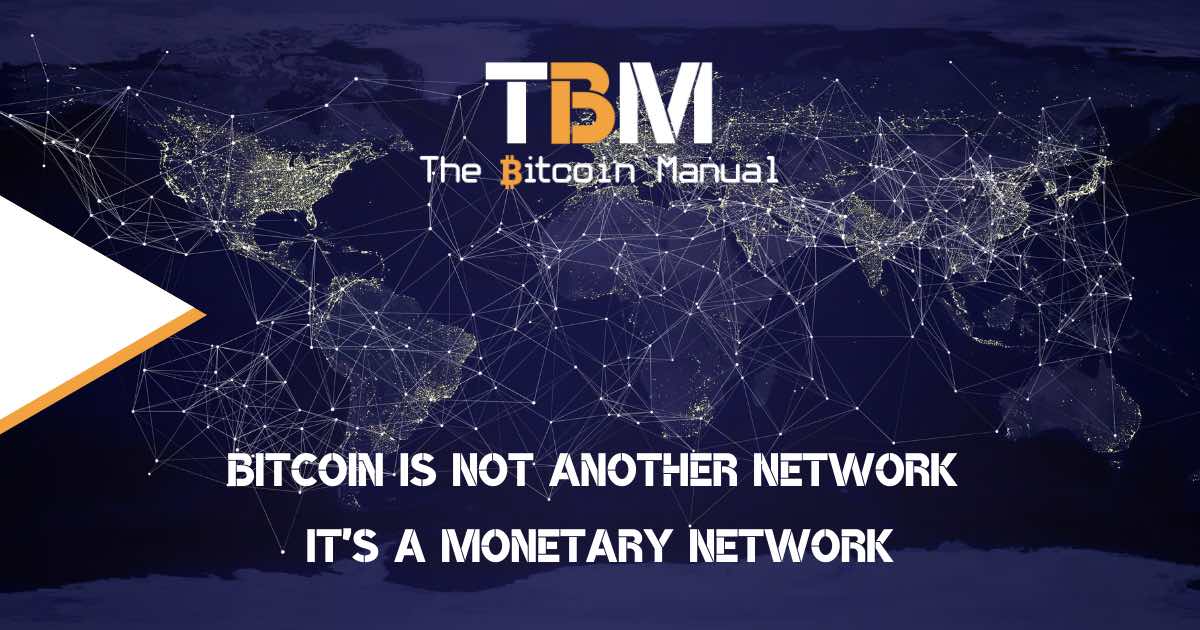 As the Bitcoin network grows, it starts to reach the eyes and ears of a range of people, all of who have their own opinions, and it’s always interesting to see how people rationalise the idea of Bitcoin. It’s always fascinating to hear a different hot take on Bitcoin, so you don’t find yourself in an echo chamber.

I am pretty bullish on Bitcoin, but I try to keep an open mind; I am not saying open-minded in the style of let’s all start shitcoining, but let’s listen to what others have to say about Bitcoin. Fresh eyes can often unearth things we may miss, and I don’t want to be someone who only cheerleads Bitcoin, but I want to be open to its shortcomings as well as its strengths.

One critique of Bitcoin is the network performance; all these blockchains claim to be a network. They will mimic the growth of network-based companies like Facebook, Apple, Netflix and Amazon as if these companies cut and paste the same playbook.

So the criticism is, if you’re not fast and cheap or near free, you’re always going to fall behind. This is how these network-based companies grew; they subsidised costs with investor capital and then found innovative ways to pass on the costs to the consumer to repay investors and generate profit.

This is the playbook all shitcoins that HAVE a working product are trying to sell their investors. All these blockchains are now in a race for investor metrics like the number of users, trading volume, and price, but none focuses on a specific problem.

Many of these other chains call themselves “general-purpose blockchains”, which loosely translates to a solution looking for a problem.

These companies do so much more now, but in the beginning, they were focusing on solving one problem people felt was worthwhile.

Macroeconomic factors hurt all of us people.

So what problem is Bitcoin solving? One of unnecessary inflation and currency debasement, of course. We have become used to the worlds free-floating fiat currencies, as we humans tend to adapt to any change and rationalise it. Since 1971 we’ve kept moving the goalposts, expanding the money supply and allocating more significant percentages of this representative productivity to people who didn’t produce much to acquire it.

Fiat supercharges the idea of wealth without work; a tactic many shitcoins employ to sucker in users. It’s not hard to slightly better than the 100s of fiat currencies that only survive because we’re forced to use it.

Yes, Bitcoin is a digitally native currency and has a host of other features, but to me, the primary solution is for combating inflation WITHOUT productivity driving it.

This monetary inflation affects all of us, rich and poor. Yes, the rich may be better off, but no one is better off if societies collapse. Yes, the wealthy among us have a better selection of assets to invest in, but eventually, these assets absorb far more monetary premium than they can justify.

Like NFTs, Gameboys and pokemon cards selling for millions, anything to get out of fiat.

Bitcoin solves for this desperate need to allocate monetary premium away from fiat or have it debased.

All these other networks focus on acquiring as many users as possible; the more users, the more inventory they have to sell to advertisers. The reason Facebook, Amazon, YouTube and Apple want to grow their user base is so they have more inventory to sell to their real customers, the advertisers. It doesn’t matter what kind of user you are, as long as you spend more time on the platforms creating data for them to mine.

My issue with this is Bitcoin doesn’t rely on the number of users it has but the amount of monetary premium these users bring to the network. What is the point of having millions of users who don’t contribute to the network?

Do you think everyone on Facebook is a profitable user? Not a long shot, Facebook’s profits come from its ability to group users together, so you get some that are worth your time and spend and others that are not, and you have to keep playing this game to acquire leads. Facebook can constantly mark up their access to their user base, and this is how they generate revenue.

Bitcoin doesn’t work on a network like this; it’s not about how many individual users are coming on to the network but how much each individual user brings in monetary premium.

Bitcoin works fine for someone who holds 2000 satoshis or 2000 Bitcoin; the same rules apply, providing an incentive to use the network as a higher LSM individual.

I am not saying this to dog on poor Bitcoin holders, lol in fact; I am one myself; I try to secure as many sats as I can and am not too concerned with the amount of Bitcoin others own. I focus on my position in the network and how much monetary value I want to allocate to it.

Since the number of Bitcoin available is finite, this guarantees your position on the chain once you acquire a Bitcoin or several.

The Bitcoin network isn’t optimised to care about how many users are active but the value they want to store in it. I don’t care if other chains have more users or more trading; I am not interested in that; I am interested in storing unused productivity for the future; I am a hodler.

An actual network effect builds businesses around the network.

Another sign to me of a growing network isn’t the number of users but the amount of business and productivity generated due to the network. Facebook is a network business because it creates jobs in social media marketing, influencer marketing, eCommerce, content creation and monetisation and more.

You don’t have to work for Facebook to extract value from their service; you can leverage it for your self-interest and create economic value. This is something I see in Bitcoin; people are building mining businesses, educational businesses, financial services businesses, eCommerce businesses and more, all using Bitcoin.

The core network is preserving value, but the velocity of Bitcoin going into paying for goods and services also generates additional productivity that is not attributed to the price.

PrevPreviousBank Bail-Ins? I’ll Bail Out To Bitcoin Instead
NextBitcoin Requires Monogamy Not PolywhoringNext