Lesson Learned – I Should Have Just Stuck With Bitcoin

Home » Articles » Lesson Learned – I Should Have Just Stuck With Bitcoin 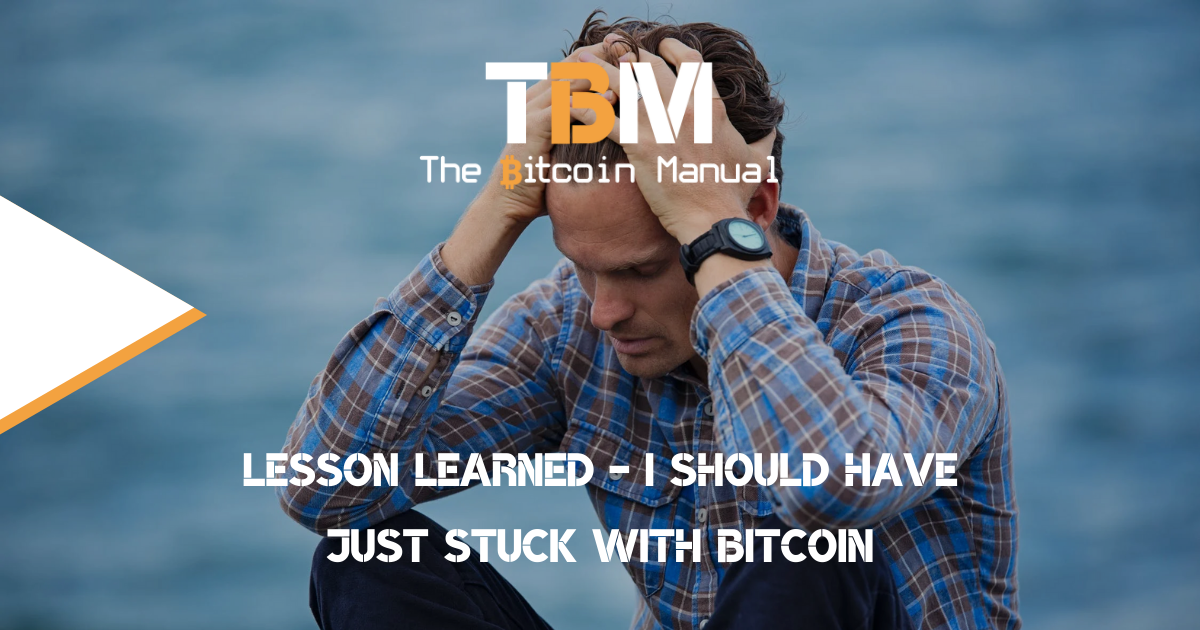 You know the story. For the most part, we all got sucked in to the allure of BTC as we saw the fiat value of it rise up. Many thought they missed the boat, myself included as I FOMO’ed in and firmly planted “Flag Nicky” on the top of the 2017 summit at $20k (£13,500 ish).

Fast forward to 2021, a new summit at $63k (£45,500 ish) appeared that was spurred on by a few factors but most folks will point to ol’ Musky boy and his tweets. Despite all this, the reality is that the boat is still at the port, waiting for more people to hop on board – we are only at around 3% global adoption after all.

Chasing “The Next Bitcoin”

Sadly though, that “unit bias” is a strong feeling. I know, I’ve been there.

I first heard of Bitcoin in 2012 and didn’t jump in until 2017. When I saw how high the price was and how little of one Bitcoin I could buy, I was sucked in to the hype and marketing of other projects promising the world. Naively thinking that all these coins would do the same as what Bitcoin’s price action did, rabid greed took over and I felt I was set after buying a few thousand of the “next Bitcoin”.

Jeez, how wrong was I?

Lock-up periods, a $100 sell order crashing the market and no liquidity to even get all your shitcoins out are some of the things to look out for with these projects but that’s a story for another article.

That year in 2018, the fiat value of those “piles of steaming horse manure” coins evaporated by 85% or more, but that wasn’t the end of it. When I looked at the Bitcoin (or sats) value of those tokens, the story was far worse.

Most of the time, you have to buy Bitcoin and then trade to your shitcoin on an exchange but when you want to go back to Bitcoin, you will find that you need far more shitcoins to get back the same amount of Bitcoin you originally had!

Fast forward to 2021 and we are in the midst of another bull cycle frenzy. Bitcoin prices skyrocket and those shitcoins I held on to that are left are also starting to pick up their fiat value. We all start losing our mind thinking we’ve made it because all you’re thinking of is the fiat price and hoping to get fiat rich.

However, as we’ve covered here on TBM a few times, fiat value is irrelevant as our purchasing power is being eroded at an accelerating rate thanks to inflation and money printing.

Look At The Bitcoin Value Of Your Trade

Despite the fiat price of all these other coins going up, they were actually mostly losing value against Bitcoin with very few exceptions, maybe 1 out of the 10,000s out there. The fiat value of these alts are pretty much pegged to the value of BTC and when people see these “pumps” happening, they get excited but the sats value is nothing to write home about.

However, move that greed and focus on the price away for a second and take a step back, breathe, relax. These are questions I began asking myself once I started sensing something was up and had that feeling of dread that I’d made some big mistakes by shitcoining.

“What have you just spent your money on? Have you actually done any research or are you just blindly following some hype that you heard on Twitter and filled the earlier bagholders stash, only for them to exit on you? Can you withdraw your tokens straightaway? Is regulation going to crack down on these projects? Why didn’t you just focus on Bitcoin all this time?”

Once I started taking a step back and realised what was going on, I cut out the noise, removed myself from all the shitcoin hype and looked at developments on Bitcoin, of which there are plenty. It was like the penny finally dropped.

I had a completely new appreciation of how much work is going on by developers to ensure Bitcoin remains the hardest money going on the main chain, before it can be scaled fully and the fun begins.

As I’ve been working on some of the pages here on TBM, my eyes and mind have been opened big time – you can do a lot of things already on BTC with instant and low fee payments, smart contracts, issuing assets, tokenising products and NFTs and when Taproot goes live, it will render a lot of these other projects pretty obsolete.

Not only this but I have noticed that a lot of the people that are developing products for Bitcoin are really open to helping you understand it. This was apparent when I’ve been reaching out to a lot of companies, people and developers like an absolute noob and ask them to fact check what I’ve been writing. They got back and really appreciated the effort we’ve gone through to help explain in a non-tech language here.

There is plenty to get to grips with Bitcoin and once you dive a little deeper, it will click.

For me, Bitcoin is by far the best savings account I’ve had over the last couple of years and has not just preserved my purchasing power over time but improved it a lot!

My mistake was chasing the “next Bitcoin” when really, I should have just stacked sats the whole time. Better late than never to realise this and you are not too late to Bitcoin either!