As a bitcoiner running a node helps decentralise the network. Each node helps increase the number of copies of the ledger and validating transactions and make sure consensus rules are followed. Running a node gives you confidence in the network and ensures that you never trust anyone to validate the data but do it yourself.

Running a “bitcoin full node” is a great way to improve your security and privacy and is not only a way to decentralise the network, but it also has benefits for the individual user. Running a node isn’t as technically difficult as you may think, nor is it taxing; bitcoin developers have made sure that that ledger and software can always be maintained by anyone with minimal technical requirements and minimal hardware needs.

While a full node is the best option, you can also run a pruned node, which is a watered-down version of a node that may be easier to run for your specific device or use case. 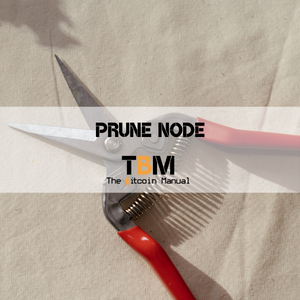 What is a pruned node?

A pruned node is still a bitcoin node focusing on the main chain. These nodes, however, only store a part of the blockchain, and this is a way to help more people to have their own nodes. Since pruned nodes require fewer data storage to keep in consensus, it offers lower-tech users the opportunity to participate.

Think of it as the second line of defence; you have your full nodes at the core, with pruned nodes offering support and all checking each other’s work. Increasing the number of node operators thus increase the security of the network. Because the more copies of the blockchain there are, the more robust the existence of that blockchain is.

Why would you run a pruned node?

Much emphasis is placed on the mining part of bitcoin, but make no mistake; nodes are the foundation of a blockchain’s security. They host copies of the blockchain and help perform various necessary tasks for the network to function with complete transparency and remain decentralised.

The issue, however, with nodes, is that the larger the blockchain database becomes, the more resources it requires for every individual to run it effectively. Since bitcoin’s focus is on decentralisation, it needs to remain as low tech as possible to keep entry barriers as low as possible.

The fewer people who are running nodes, the higher chance of corruption without oversight. Despite the best efforts of developers, the blockchain keeps growing in size, and it will start to make it difficult for some people to run a node because of the lack of disk space they had to support to get it up and running. Documenting all bitcoin transactions and hosting them each year will take up more space on a node, with a lot of that data not being used as it is outdated. However, they remain integral to the chain’s history, which is vital for network oversight.

So instead of making trade-offs that could sacrifice decentralisation, bitcoin developers have come up with an optional solution, known as a pruned node.

What you need to run a pruned node?

To set up a pruned node, you’ll need to download bitcoin Core software which is the framework of the Bitcoin Network. Once downloaded and installed, you will need to get a the latest snapshot which is a pruned version of the bitcoin blockchain, instead of downloading the entire ledger.

You will need a desktop computer with at least 4GB of hard disk space available to complete the installation. You can run a pruned bitcoin node using bitcoin core on any desktop device that meets the minimum requirements, such as macOS and Windows devices as well as Ubuntu, or even run it on a Raspberry Pi as you could with a full bitcoin node.

How to run a pruned node?

To run a bitcoin pruned node does not require too much technical knowledge and the easiest way to do it is by using the Bitcoin Core software. You can run the bitcoin core software on any desktop device as long as it has enough storage space for the software and the pruned database of the bitcoin blockchain. It is important to note that a pruned node must have at least 2 gigabytes of storage for the blockchain copy. With this capacity, you will be able to officiate as a verifier of a lot of information without great effort.

The bitcoin core software has had this functionality since version 0.11 and is our recommended option in addition to Spesmilo’s ElectrumX.

How to use a pruned node

Once you have the latest blockchain snapshot and bitcoin core running, your pruned node will be in use, and you’re ready to go.