The Safety Of Scaling Bitcoin In Layers

Home » Articles » The Safety Of Scaling Bitcoin In Layers 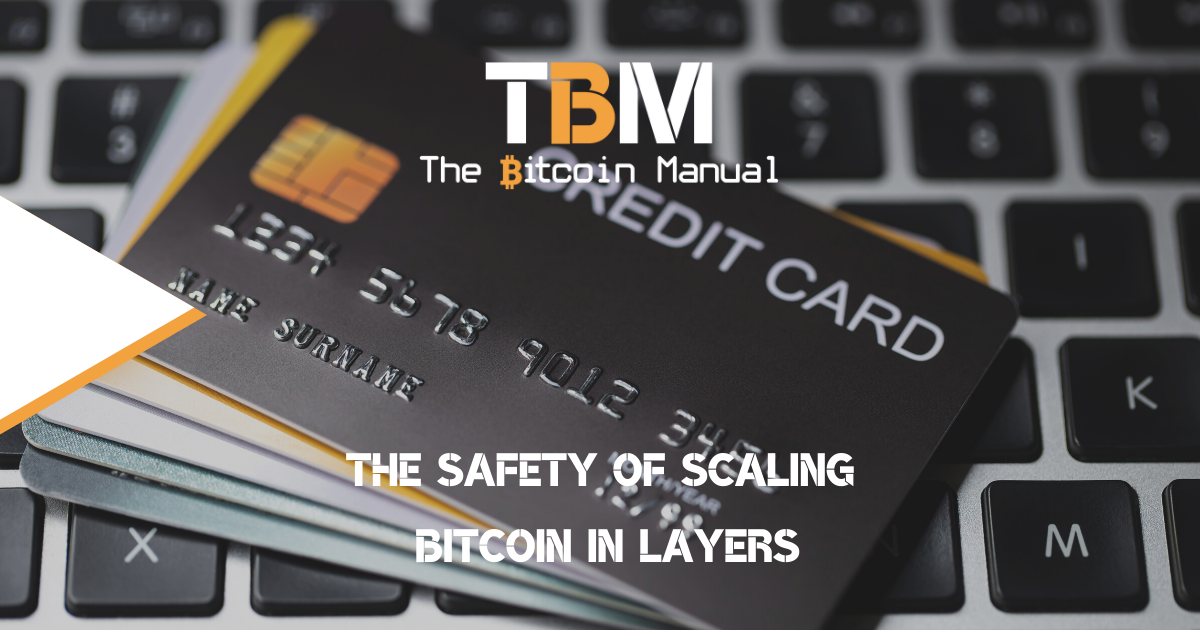 The scaling debate around blockchain technology continues. As long as bitcoin’s scaling solutions have not integrated into wallets, exchanges and applications, there’s an opening for altcoins to claim they’ve solved the problem. If you hang around the bitcoin space long enough, you’ll probably be exposed to some of its scaling critiques; it’s too slow, it can only do seven transactions a second, it’s old boomer tech, it’s too complicated to use, and the list goes on.

Those that tend to hold these opinions are either fiat maxis who don’t understand that the money they transfer on banking rails is interbank IOUs that are settled behind the scenes at a later date. A product that works through banking systems’ ability to create credit through rehypothecation.

The other group would be the shitcoiners, trying to sell you on their project, compromised individuals who only hold their token as far as their exit value and would be willing to dump on you in a second. Sure their chains could be faster, and they use these narratives as a way to sucker in new investors, but they don’t tell you what is sacrificed for that speed upgrade.

You cannot upgrade throughput on the base layer without sacrificing security and decentralisation, a trade-off no bitcoiner is willing to make; the safety of your money far outweighs the speed at which your money can travel and settle.

The bitcoin network is always going to take a safety-first approach, opting for the robust censorship resistance and consensus change resistance that comes with decentralisation and the security and finality assurances that come with proof of work. Taking this stance requires you to accept the limitations of what your chain can process.

The blocksize wars of 2017 were far more complex than I am going to go through today. I will only tackle the debate on scaling, which was between two factions. The big blockers wanted larger blocks so that more transactions could be processed per block, adding more throughput.

However, in doing so, fewer people would have access to hardware that could keep up running nodes and thus reduce the decentralised aspect of the network. Opting for big blocks would provide a short term boost for long term pain and possible attack vectors in the future.

In contrast, the small blockers prefered the safety and security of keeping the chain as decentralised as possible and opted for off-chain and side-chain scaling with the release of SegWit instead.

After much debate and in-fighting, the small blockers came out victorious, and scaling solutions like the lightning network and liquid network emerged as possible solutions.

Why off-chain and side-chain solutions

There are many reasons why scaling in layers is the better option, the first being that you can get a bunch of experimentation. Since it’s all open-source, these scaling solutions receive contributions from all over the world, and anyone can get involved.

Lightning nodes on the network are all voluntary individuals looking to support the growth and earn an income; the open-source protocal receives its development from different parts of the community. The lightning network currently has three different implementations, namely:

They run the software upkeep and deploy updates to their version of the software, and users select which instance they prefer to run.

While the liquid network also has liquid nodes that are run by individuals, it also has a federation of bitcoin companies that propagate blocks on the network, while the node software is managed by Blockstream. This is more of a centralised scaling solution that makes these trade off’s for different reasons.

A sandbox for experimentation

I’ve only mentioned the scaling solutions that are popular right now, but other solutions are in the works, like state chains and RGB networks and many more. This won’t be a one layer rules all solution, and while bitcoin the base-chain may be robust and hard to work with, second layer solutions offer developers far more freedom to come up with creative solutions.

We’ve even heard of talk that specific second layers can work together, like having lightning channels open and close on the liquid network or via state chains.

Having different scaling solutions offers the user a chance to pick from different solutions that best suit their needs rather than a centralised entity telling them this is the best way forward, as is the case with shitcoins.

All second layer solutions are kept on their toes by the competition, if they slack in a certain area, the liquidity will flow from one solution to another, and that freedom of choice is an incentive to keep innovating.

Safety of the base chain

Since the bitcoin network scales in layers, it means the primary chain is unaffected by what goes on in solutions living on top of it. If issues occur, or if a solution fails, users can settle their funds on the base-chain once again and use the main chain or move to another second-layer solution.

It provides a fallback plan for any issues a second layer may have, and if one were to fail in a spectacular fashion, funds could still be rescued and a new solution or upgrade on the broken solution can be proposed.

Scaling in layers can be clunky

Scaling in layers is a little messy and disjointed, but this is how a decentralised movement works. It’s not like a company with project managers to streamline every point from development to communication. It is an organic growth of the network, and it may seem a little alienating to some, especially those who are used to the corporate style of approaching a porduct.

I can understand why people don’t take towards these early-stage solutions now and do not price them in, but the idea is that much of this will be abstracted away from users in the future. It may seem a bit of a mess now, but the ideas that survive and have merit will eventually start to merge into a more coherent system.

If I were to speculate, I would imagine that in the future, your UX would be one wallet balance and spending on the type of transaction you perform. Funds will switch from one solution to another to get the funds there faster or with more safety, and it won’t be up to the user to have individual interfaces for everything as we do now.

Yes, there will still be room for the purist who wants complete control, and they will be catered to with certain products, and that’s why layers are a better solution; they provide optionality for everyone.

South African bitcoin pleb falling down the rabbit hole and willing to share every bump, scratch and knock along the way
View more articles from this author
PrevPreviousUtility Tokens Are Futility Tokens
NextBitcoin Gaming: Balls KingNext