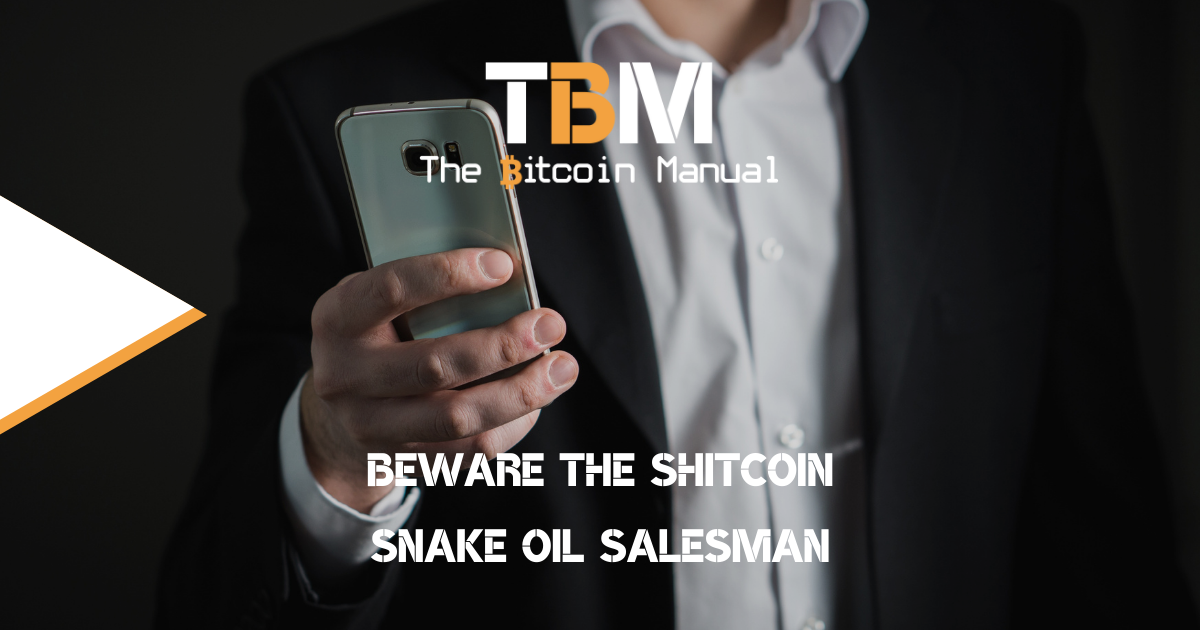 Over the last year, I’ve been observing the behaviour of certain accounts in the crypto world and I shake my head a lot at the total non-sensical drivel they come out with.

The kind of people who are a little like moonboys except they are on a totally different grade of crack.

You know the “y’all got any more of that…” meme? Imagine that but frothing at the mouth with every shitcoin you can think of.

I am of course talking about the “Shitcoin Snake Oil Salesman” (SSOS) – people so dangerous to noobs that they can easily get suckered in to the hopium and didn’t know what was best for them.

Don’t worry folks, we have some tips to look out for that will help you prepare for when you come across the SSOS.

A snake oil salesman is a term reserved for someone who sells, promotes, or is an advocate of some kind of scam and shitcoins are the biggest scam of them all.

The SSOS will often pop up on Bitcoin related threads, telling you the flaws with Bitcoin and then saying “shitcoin xyz can do this” or “shitcoin xyz fixes Bitcoin” with a link to their shitcoin.

Add to this they’ll have some ridiculous statement saying that their shitcoin is set to be the next big thing and will hit a dollar per coin.

If you wanted to waste your time and do a little bit of maths to see how much money it would take to get their shitcoin to $1, you’d quickly realise that there would need to be more money than is actually available in the world for that to happen!

You will also see comments such as “Bitcoin is boomer technology” and “it’s too slow”, “uses too much energy” or general bashing of all the usual FUD topics that do their usual cycles.

However, unlike normies or nocoiners, the SSOS doesn’t just leave it there at the bashing, oh no!

They then try to shill you their chosen poison chalice saying how it’s the answer, enticing you in with get-rich-quick figures and are usually an anonymous account, people who got in early, the founders of the project looking for an exit or some other ponzinomic set-up.

I have to say though, what gets me are those “influencers” who make their money with deals from shitcoin projects, start shilling it and then dump on retail to move back in to Bitcoin, or get paid in Bitcoin to then shill shitcoins to their audiences!

How To Protect Yourself

How do you get knowledge?

The first place to start is to read, learn and DYOR about the last 6,000 years of what sound money is compared to the fiat or government money system we’ve had since 1914 and understand what is going on here.

Back in January 2009, Bitcoin was launched to create a digital peer-to-peer cash with a pre-programmed money issuance that cannot be changed. In fact, the way it works at the fundamental level has not changed since it was rolled out.

There has always been mining to process transactions on to the blockchain. There have always been nodes that anyone can set up to verify the entire transaction history, even on a low budget. The issuance rate of Bitcoins is set in stone and there will only be 21 million that will ever exist.

Recently, I read a book called The Bitcoin Standard by Saife Dean to help bolster my knowledge and since the governments of the world decided to come off a gold standard you can quickly see where we’ve gone wrong.

There was a long period of time where gold was recognised around the world as a:

What the gold standard meant was that the government-issued paper money was redeemable for gold anywhere in the world. Banks held gold in their reserves so that you and I could have cashed in our government notes and taken our gold out.

Governments could only collect money from its citizens via taxation, not inflation or money printing like we see today.

In this gold standard era, it at least kept governments a little more “honest” and citizens mostly focused on producing valuable goods and services, rather than trying to produce money as it was already sound and fulfilled the 3 criteria above.

Gold reserves would increase on average by about 2% per year and was difficult to make more of so compared to other metals, gold was the best version of sound money available.

However, in the 20th century, governments decided that this wasn’t good enough any more so they made it illegal for the general public to own gold, moving to this fiat system where, since 1971, the money is backed by government decree, i.e. trust in the government.

Unfortunately, this approach, first derived by an official called Keynes, has lead to money printing and inflation that we’ve been used to over most of our lifetimes, on top of taxation.

This unsound money has meant that monetary policy can be decided on a whim and makes no-one really accountable for it as governments change every 4 years so there’s no incentive to have sound money.

Inflation is going up at a staggering rate, which means prices of vital goods and services start to go up uncontrollably and that’s just if you’re in USA.

What about the countries that have their own local currencies that are inflated along with the US dollar inflation due to a global agreement that the US Dollar is the global reserve currency?

Add to that, central banks around the world still have their own gold reserves but fiat is not backed by that and folks like us aren’t allowed access to it anyway.

Say No To Shitcoin Strangers

It’s these unsound money principles from governments that are very reminiscent of the shitcoins that SSOS try to sell you except the shitcoins really are there to enrich the original developers, not to solve the problem of sound money.

Those with the most power or stake can decide on how to change their shitcoin money issuance and that doesn’t sit easy with me.

Isn’t that the Cantillon effect in the system we currently have with fiat? What’s the difference?

Why would I want more of that with shitcoins that then run the risk of being shut down with regulation due to the centralised nature of how they are run?

It doesn’t make sense to me but hey, I’ve made my choice.

I’m not saying Bitcoin is perfect by any stretch but it has already solved the problem of 3rd party financial instruments to create a peer-to-peer digital cash system using blockchain technology. A chance to opt out of the fiat system.

I’m looking for a place to store my hard earned money from fiat mining to use at a later date that I know how it works and that it won’t have its monetary policy change on a whim. That place for me is Bitcoin. Remember, say no to Shitcoin Snake Oil Salesmen 😉

British bitcoin pleb falling down the rabbit hole and willing to share every bump, scratch and knock along the way
View more articles from this author
PrevPreviousThe Cryptocurrency Click Trader Trap
NextWeb 3 & The Metaverse Is A Repackaged NarrativeNext