Web 3 & The Metaverse Is A Repackaged Narrative

Home » Articles » Web 3 & The Metaverse Is A Repackaged Narrative 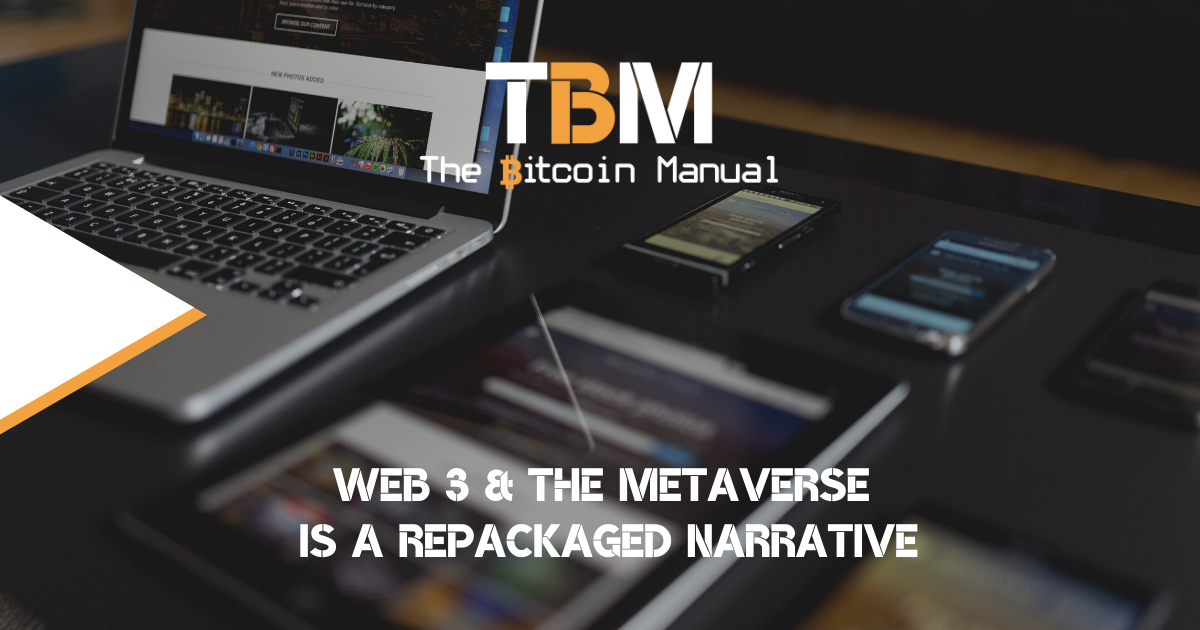 I was lucky or unlucky enough (depending on where you stand on the whole bitcoin thing) to fall down the rabbit hole and purchase my first bitcoin in 2015. It wasn’t much, of course, playing around with this new thing that goes up and down. It captures your imagination, and you want to know what’s backing this crazy money printer.

So you venture to the normie internet, you hit up a search engine and social media, and you’re smashed with a plethora of content. Since everyone’s social feeds and search engine feeds are different due to customisation from their preferences and location, we all get a different experience, and we’re sent down different paths.

I was “early” enough that when I did my research, there was very little bitcoin content. Andreas Antonopoulos was the one I got hooked on, and he was entirely focused on bitcoin. I learned what I thought I needed to; in hindsight, it wasn’t that much, and I paid the price for not diving deeper, as it should have done.

If you don’t learn, you need to get burned.

In my arrogance and naivety, I eventually fell for the shitcoin pitch and come 2017; it was a complete frenzy of new shitcoins all pitching how they were going to revolutionise this or that industry simply by slapping a blockchain and a token on it.

When you don’t understand how the tech works, it all sounds plausible, and so you hand over your fiat or bitcoin for these crapcoins and turdtokens.

Eventually, bitcoin had had enough of the leverage and went into a bear market, obliterating a large percentage of these projects as they either exited scammed or ran out of funds. Most never recovered and left investors with nothing but a memory.

It was a harsh lesson to learn, and one I refused to repeat the second time around; I spent the next bear market learning all I could about Bitcoin and even started a blog that you so happen to find yourself reading.

I don’t get paid to do this; I only thought it would be helpful to offer an opinion of a normie who has been there and fell for the promise of the t-shirt. All the while ending up with the shirt off my back ripped from me, for good measure.

In 2017, the “altcoin” market or rather a shitcoin cabal, formulated three narratives to try and funnel money out of bitcoin and into their ecosystems.

The ICO was the cash cow, the dream of earning massive returns by investing in projects before they launched at a pre-sale value, and once it launched and hit exchanges, you would be able to sell them for a huge premium. Projects were airdropping tokens to get people interested using it as a way to encourage increasing your position. I mean, if I got 50 free tokens, why not buy another 50 and make it an even 100, im averaging down my cost basis; I am a smart investor.

Oh, humans can justify anything, can’ we?

You now had the chance to be an angel investor for the cost of a few bucks, and man, did it sound attractive. The project lineups were never-ending, and there was always something new coming that you could sink your teeth into and create a “diverse” portfolio of risk.

The issue was some of these ICOs never even got to the launch phase and simply ran off with the funding. Others had no product or product-market fit, and once they ran out of funds to buy back their token, it tanked into oblivion.

If by some miracle, your ICO did launch, it was never going to be a fair distribution. Sure, you got in at a few cents, but insiders got in even cheaper or worse, got handed a bunch for being close to the money printer.

We were going to live in a tokenised world filled with different utility tokens, and if you wanted to use a service, you would need their token. Eventually, people figured out that money is the only real token you need; it’s a utility token accepted everywhere.

Then there was the world computer narrative and how these Turing complete blockchains would provide us with distributed computational power so we could decentralise services. You could store files across different computers or get access to massive amounts of computation when needed and try to co-opt the idea of cloud services but with a blockchain.

So all those stories died during the bear market, and once bitcoin decided it was time to reprice based on its halving cycle, it brought in massive amounts of liquidity. The liquidity that shitcoiners are desperate to suckle on, so they went back to the drawing board and looked at what worked last time and how they could repackage it for the next round of suckers.

So what are the big buzz words this time around?

DEFI looks to have replaced the ICO craze, and instead of buying a coin and hoping to flip it. You are locking your coins into a smart contract, receiving the 3rd coin in return as a reward for providing liquidity and then trying to flip it. You would pull your coins out of one smart contract and look for one that pays a better yield. Investors try to farm as many coins as possible with their funds, to eventually flip into fiat.

Then we come to Web 3 and NFT’s; you’re going to own a part of this protocal; you’re going to have unique identification for your digital assets. You’re essentially going to use tokens to access certain services or income opportunities.

Then we get to the biggest barf fest in this cycle; it has to be the metaverse story. Everyones most hated billionaire Mark Zuckerburg has a fantasy of keeping people inside the Facebook ecosystem through virtual reality so he can extract more data and give you more screen time to serve you more ads.

A creepy objective to want to mirror or attach your services to, but hey, shitcoiners never did make any sense. The metaverse, as I understand it, is a digital place where you would be able to engage with others, share ideas and resources on a global scale.

It’s the same technology and the same narrative, only repackaged by what I think is marketing firms flush with venture capital funds looking for a way to put a spin on the 2017 hustle. Yet now that so many inexperienced retail participants are financially invested in these things, they are overly optimistic about it and are convinced it’s incredible. When in reality, it’s just marketing buzzwords that repackage old concepts as something new.

Yes, these overbearing loudmouths can be annoying at times, but let them have their fun; it’s a party as long as the liquidity is flowing. Liquidity is the liquor of the party, and as soon as it drys up and people sober up, they will wake up and see how they were acting irrationally and made fools of themselves.

Now I do not blame the large cohort of retail investors who have entered the space and believe this garbage. This is the message they are receiving without any prior knowlege or experience.

I don’t even argue with people who pitch these things unknowingly; I know that once the downturn in these altcoin markets come around, many will be humbled, and a few will turn into bitcoin maximalists. So why fight people if you’ve already won?

These “newbs” and “newcoiners” are fighting you based on a short time frame, not knowing how long the battle wages on, and we as maxi’s are battle-hardened.

It’s going to take more than a few technical terms and baseless claims to get us into a fight.

They double down and try to sucker in more impressionable investors so that they can either sell their speculative positions to these people or earn from referral fees from shitcoin casinos. These shitcoin salesmen and women will say anything and repeat any of these conveniently crated narratives to get you to buy a certain coin.

Sadly you’re not decentralising anything; these protocols are owned by companies, and so is the token distribution. All you’re doing is paying these guys large sums of money for products that don’t have any porduct market fit and will require continued centralisation to remain afloat. I find it ironic that people who think they are anti-fiat and anti-establishment are playing right into the hands of venture capital, all for the promise of more fiat.

I take no pleasure in seeing people get wrecked in the market. I naturally benefit since I hold bitcoin only, but that’s not the point. The point is there is a way to get out of playing ape games to stay ahead of currency debasement.

You can ignore my message, but I am putting it out there, dated and time stamped for your convenience.

South African bitcoin pleb falling down the rabbit hole and willing to share every bump, scratch and knock along the way
View more articles from this author
PrevPreviousBeware The Shitcoin Snake Oil Salesman
NextDon’t Get Bullied Out Of Your BitcoinNext