Don’t Get Bullied Out Of Your Bitcoin

Home » Articles » Don’t Get Bullied Out Of Your Bitcoin 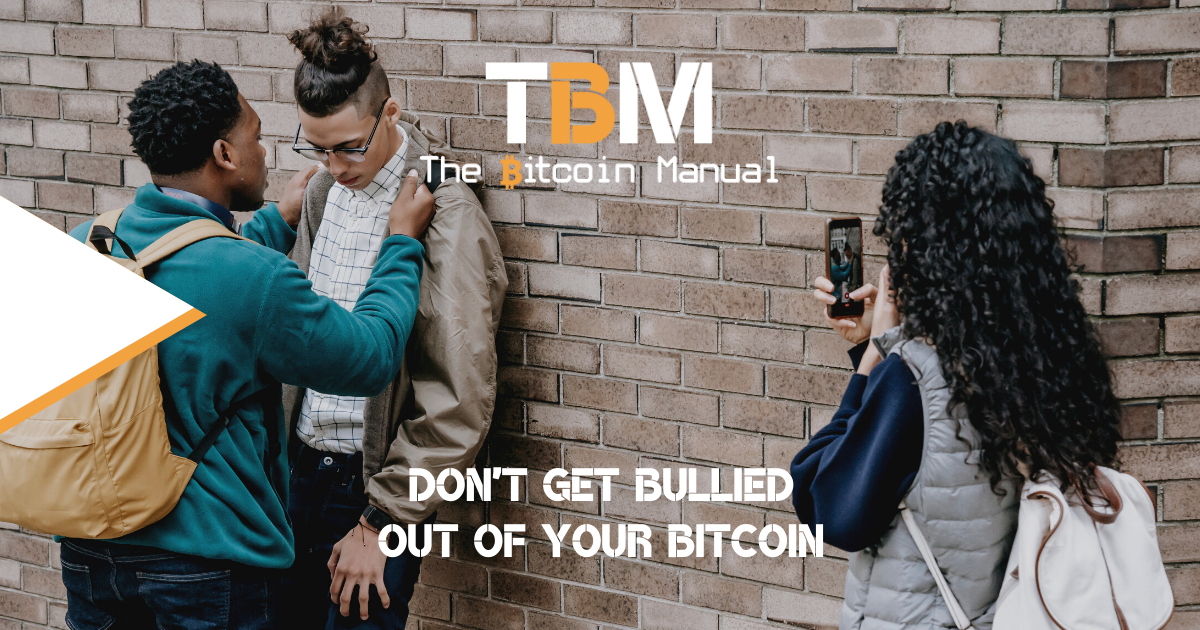 For most of us, owning bitcoin is the first time we take custody of digital property with no third party risk. It’s a strange feeling having unconfiscatable wealth that appreciates purchasing power each year. It can somewhat be overwhelming like it’s some alien technology that you may not be ready to use. If you think that, you’re correct; it is something alien to us since we’ve all only known money that loses purchasing power each year.

You are correct when you think it’s not something that you’re ready to use because it’s a savings technology. You only deploy your savings when there are great opportunities around you, of which nothing is beating bitcoins returns at the same risk profile.

Bitcoin is the most valuable form of wealth storage on the planet. It has been the best performing asset class for over a decade. It is secured by the worlds most powerful distributed computing network. Apart from purchasing bitcoin from the open market or working for it through mining, there is no way to get more bitcoin.

The way the ruleset is set up is with the intent to make bitcoin hard to come by, more challenging than any other store of value. The more difficult it becomes to acquire as more people want a piece of it, the more expensive it becomes to access.

Humans are notoriously crafty creatures, and with bitcoin, the incentive structure changes. It is so rigid and so unforgiving, you can try as you might; you’re not going to weasel your way into heaps of bitcoin without some proof of work.

But who wants to do that?

Why would I want to spend money on a mining operation or go out and earn a days living and convert it into bitcoin like a good little fiat miner?

Charlatans in all shapes and forms are conspiring to get your bitcoin using any means necessary.

When you have an asset like this that is so scarce, do you think others will not want it?

Do you think others will fight fair to get a piece of the bitcoin pie?

No, they are going to test your resolve with a constant barrage of news, threats, regulation, physical attacks and more. You are the owner of the worlds most pristine collateral. Do you think no one will fawn over your wealth and want to take your place?

Just like the schoolyard bully who is insecure and want to take from others to make themselves feel better, so too will shitcoiners and governments try to take your bitcoin.

These people have zero understanding of math, and the public school education system and parents have failed them greatly. Their simple understanding of arithmetic means they can only equate more with good and less with the bad. A mental framework that works under the fiat system, it’s all about getting more currency units at the end of the day.

Unit bias bullies will tell you things like look how much fiat you can get for your bitcoin or how much stuff you can get, regardless of those things being meaningful or their ability to hold any value.

The fact that you can trade your bitcoin for more of this makes it a better deal. If you’re one of those who are bad at math, you may have to learn this lesson several times.

But the fact that you would rather chase wealth before learning how to manage it means you will lose it as soon as you gain it. If you’re not going to put in any effort into managing your wealth and improving your understanding of the world, the loss of bitcoin is the price you will pay.

Just because someone has a platform on social media, is a media personality, has a fancy business or degree or works in government DOES NOT MAKE THEM SMARTER than you. If you think these people are so noble and have your best interests in heart and care less about funnelling money into their pockets, you’re mistaken.

Getting to work against your best interest is all they’ve ever been and will ever aim to do with their platforms. The fewer resources you control, the more these people can handle, it’s a simple equation, and you’ve let them win under the fiat system, so why let them benefit under bitcoin.

These paid and unpaid shills will create articles, videos, studies and all sorts of press releases all aimed to scare you out of your positions and to buy more bitcoin. They use their perceived authority, which they attained with minimal merit, to amplify their message and drown out rational thought. They rely on enough people to believe their stories without verifying the claims and taking them at face value.

They rely on those same people’s willingness to amplify that message to their network without questioning it.

Doesn’t it seem strange that all these anti-bitcoin people are winners in fiat? Why are they concerned over others now able to gain wealth? They are concerned for themselves. They don’t want competition; they don’t want the system to change.

While some want you to stay out of the trade long enough so that they can accumulate a position before they flip on you. You’ll quickly find people singing bitcoins praises once they’ve stacked a few in cold storage. That bitcoin they’re bragging about is bitcoin that would have been yours if you didn’t listen to these talking heads in the first place.

These are the Luddites that promote fiat technology wrapped with bitcoin-based traits. These technologists and fintech enthusiasts will promote concepts like blockchain, web 3, DAO, DEFI and a host of other tech jargon and acronyms to get you to buy into their narrative and sell you a shitcoin at the end of their pitch.

Technobabblers remind me of those MLM friends that contact you out of the blue with a fantastic opportunity; all you need to do is try to understand their convoluted system and hand them some of your money.

These snake oil salesmen will say anything to get you to part with their bitcoin, creating fake ecosystems and pretending it has value so that you can trade out your bitcoin to get their meaningless token, all while they hold on to that bitcoin.

Fiat maxis will tell you that bitcoin is volatile; look at how the price moves each day and encourage you to “take profits”. So you’re going to sell your bitcoin to buy a fiat currency, let’s say the US dollar. You’re going to pay the government their share through taxes, and now what?

You have a little more fiat, and what do you plan to do with it? You can exchange it for another asset that performs worse than bitcoin or consume it and lose out on all the opportunity cost of holding that bitcoin.

Fiat maxi’s know their ship is sinking and want to drag as many people with them to feel better. So what if we’re all going to live in poverty as long as we’re in it together. Fiat maxi’s have no confidence in themselves to manage their wealth and would rather let the government dictate the value, so they want you to sell your bitcoin so that more powerful institutions have the funding to make decisions over your life.

If this reality sounds appealing to you, I wish you all of the best, but for me, I’d like to deploy my resources as I see fit.

Governments around the world will all react differently to bitcoin; some may embrace it like El Salvador, some may act hostile to it, while a few will straight up ban it. The truth of the matter is if you can secure on-chain bitcoin and break identity ties with that bitcoin, there is nothing a government can do to remove it from your possession.

They can regulate it; they can shut down exchanges, they can stop you from acquiring it with their local currency, but that’s as far as their powers stretch.

I know a lot of people fear what governments can do and how it could impact the price in the short term, but they can only ban bitcoin once. Once it’s done, bitcoin will move from the weak hands to the strong, and the network will continue on.

Bullied out of the bag.

If you let yourself be bullied out of your bitcoin, it’s okay; know that you’re donating those satoshis to the bitcoin maximalist cause, and only the strongest hands will end up with the most bitcoin. Selling so early into bitcoins monetisation is always going to be a losing game, and if you can live with that regret, by all means, sell out because of one or another reason.

Even if you have fallen for bullying tactics in the past or if you do fall for it in the future, it doesn’t mean you cannot correct your path. You may not have as many satoshis as you otherwise would have, but you can continue to stack.

You can repair some of the damage you did, and you can use that loss as motivation to never repeat those same mistakes again.

The bitcoin test is never-ending.

Owning bitcoin will continue to be a test; it will NEVER get easier; the more your bitcoin appreciates, the harder the tests become, and you will need to learn to discern opportunity from lies. As a bitcoiner, you have the responsibility to deploy your newfound wealth to enrich your life, the life of your family and create prosperity that others can benefit from by engaging with you.

Your job is NOT to repair other peoples impaired balance sheets or reward mindless consumerism.

As you acquire more bitcoin, think about what you want out of life, what you want to see manifest in the world and build a war chest to make it happen.

We are warriors ready to take the fight to anyone who aims to do us, our network and our way of life harm.

South African bitcoin pleb falling down the rabbit hole and willing to share every bump, scratch and knock along the way
View more articles from this author
PrevPreviousWeb 3 & The Metaverse Is A Repackaged Narrative
NextFiat Forces You To Earn Your Money TwiceNext