Countries That Have Banned Bitcoin 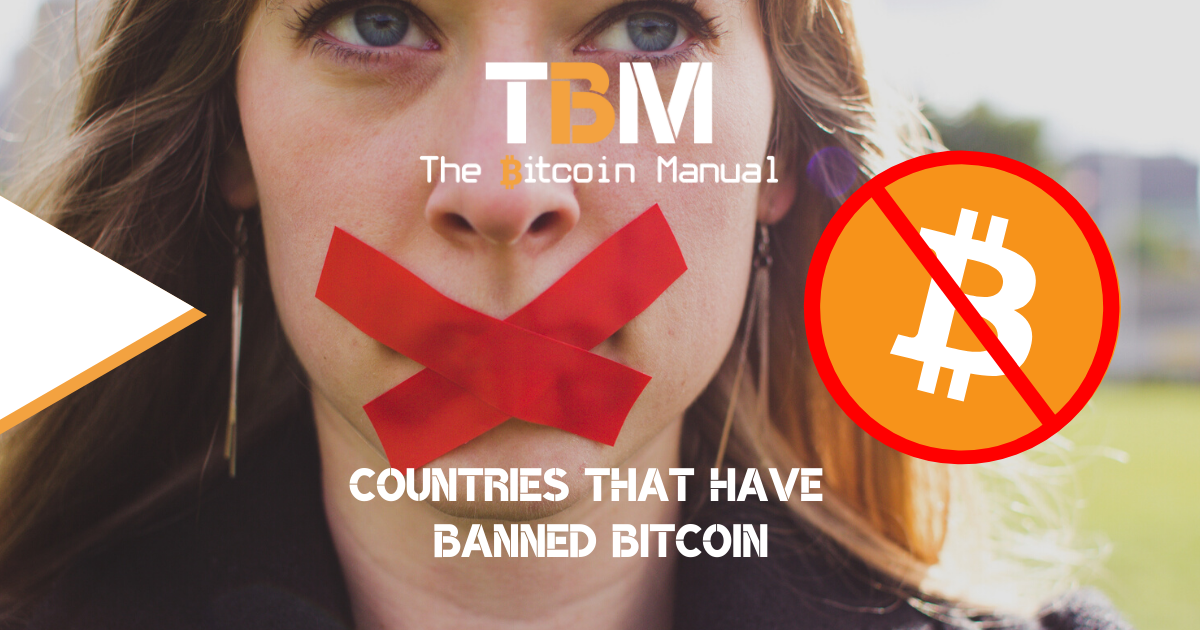 Bitcoin has always been a divisive subject in mainstream discussion; the first negative narrative to take hold was a currency used for illicit trade. There is truth to that, as there is a truth that any money has been traded for banned substances. Bitcoin has since moved past the formative years as a niche internet currency and a medium of exchange predominantly used on The silk road.

As bitcoin reached more users and as exchanges expanded to trade the asset, we saw new narratives come into play. One was the ESG issue, that bitcoin used too much energy.

The other was that it poses a threat to national security as transactions are uncensorable, and therefore international terror organisations could use it to find global operations.

Bitcoin is slightly over a decade old; from my understanding, terror organisations have been around way longer than that and never stopped.

So what were they using before bitcoin?

As is the case with anything governments don’t like or looking to control, they tend to employ fear-mongering tactics, and the tactic to reduce bitcoin is no different.

But why would governments want to stop you from owning a series of numbers hosted on a distributed digital server? What harm could that possibly do? A series of numbers is hardly threatening or offensive, is it?

Why would governments be so scared of you using electricity that you pay for to mine bitcoin? When you pay for a service and should be able to use it as you please.

Why do countries claim when they ban bitcoin?

Most countries that ban bitcoin claim it’s for the countries or rather citizens financial security. Keeping them within KYC and AML payment rails allows them to survey the funds flowing in and out of the country and limit illicit activity.

They also claim that bitcoin is an unregulated and volatile asset, and they are protecting their citizens against the downside risks by not allowing or limiting participation in the network.

Why do countries actually ban bitcoin?

The primary reason governments in certain countries act hostile to bitcoin is the threat of capital flight. If businesses, citizens and foreign investors have a global method of money transfer that is faster, cheaper and clears 24/7 all year around. These governments see it as a threat to their financial infrastructure, or so they want you to believe. If people are allowed to conduct international and local trade with bitcoin, it reduces demand for their currency and with reduced demand comes reduced income through tax and inflation.

Sure they could embrace change, like in the case of El Salvador, but this is ultimately up to the political will at play in that region.

Additionally, governments see it as an opportunity for citizens to escape specific banking regulations and monetary policy pain. If a government mismanages a currency like in Lebanon or Venezeula, citizens offer a floor by holding the money or purchasing the countries bonds.

If citizens and businesses have access to bitcoin, they can escape this walled garden of currency debasement. An escape to bitcoin could put further inflationary pressures on poor performing currencies.

I am not saying bitcoin would accelerate it or even make a difference. We see currencies trending towards zero long before bitcoin came around, but it does make for a perfect villain or scapegoat for these governments.

Type of bans governments can inflict.

Governments that have banned bitcoin have all slammed the hammer down on digital assets differently. All bans are not equal, and some are more favourable than others. I know we like to use the word ban as a sweeping statement, but there is some nuance to how bitcoin can and has been banned in the past.

So let’s look at the various banning situations or rather possibilities.

This is a simple ban to avoid too much speculation in a specific local market, where trading pairs between bitcoin and a local currency is set up. In a situation like this, you could still buy bitcoin using a foreign exchange pair like USD or a stable coin like USDT.

However, it may be harder to trade from your local currency directly into bitcoin and vice versa.

If a banking ban goes into play, it often means that businesses that buy and sell bitcoin would not be able to operate in your local country. Since they cannot get access to local banking rails, they would find it hard to acquire to trade and they probably would not have local bitcoin exchanges available.

In a case like this, you may need to opt for global exchanges depending on how your banking regulations are set up to transfer money to foreign entities.

If you cannot access global exchanges, then your next best bet would be heading to P2P exchanges where you trade directly with individuals.

Banned as a payment method

Banning as a payment method simply means you cannot trade your bitcoin for goods and services and therefore cannot conduct any form of commerce locally or internationally using bitcoin as the payment method.

In a case like this, it’s still likely that you can own bitcoin by purchasing it from an individual or an exchange.

If a country bans ownership of bitcoin, then it could go as far as bitcoin declared to illegal to own as a citizen of that country. Citizens would not have access to traditional on-ramps and off-ramps with access relegated to grey and black markets.

Bitcoin ownership may be banned, but enforcing the ban when it comes to the use and access to bitcoin is near impossible.

In many countries, the energy grid is completely run by the government, and they can place certain restrictions on what business can be conducted. Businesses within the country, while leveraging their energy infrastructure, would need to pass their regulation. If they ban mining, large mining operations would have no choice but to shut down and migrate their operations.

These bans are usually for industrial mining operations. You could either move your miners to a hosting facility somewhere else, or if you’re under the requirements set by the government, you can get away with a garage mining operation.

How profitable that will be, depends on your set-up and the cost to access that electricity which may not be as favourable when not run on an industrial scale.

This would probably be the worst form of a ban as bitcoin would not only be declared illegal but individual, and business ownership of bitcoin would be seized. In some cases, governments would provide you with a fixed trade-in rate for bitcoin, and you would receive bitcoin.

In other cases, they could be seizures without compensation.

Governments could easily co-opt exchanges to give over user funds, while those who take custody of their funds from KYC methods could also be flagged. They could have you de-banked or physically approached to give up your bitcoin.

In an event like this, if you’re not acquiring non-KYC bitcoin and storing it in a geographic multi-sig format, you are not fully protected.

Note: This is not legal advice and you will need to consult a local legal professional to get clarity on the rules defined by your local government.

Countries that have banned or currently ban bitcoin

Below you’ll find a list of countries with governments that have declared their distaste for bitcoin and have tried to limit adoption by citizens and businesses. That is not to say that these governments may not be acquiring positions of their own while they keep their citizens at bay, but that’s merely speculation at this point.

If they’re not a fan, it could be banned

The verdict is still out on bitcoin, and I don’t feel any country is a safe haven for the asset yet. Sure, you can speak to America and Khazakstan being the biggest in the mining game and El Salvador having it as legal tender, but this could change as regimes change.

Bitcoin is designed to resist all forms of attack, both global and domestic, if you learn to use it correctly. It’s up to the individual bitcoin to protect against any threats on their property, time and wealth, all of which bitcoin represents.

I am not saying bans are on the horizon, but I would say use bitcoin correctly with privacy methods of self custody and protect yourself against any outcomes.

Once you have complete custody of your funds, it is up to a country and government to convince you to deploy that capital in their nation. If they can’t, someone else will, and bitcoiners will go where they are treated best.

Some governments may remain hostile against their better interests, but others will embrace it, knowing it’s the only way to prosperity an increasingly digital world. They will set up facilities to cater for bitcoin and bitcoin holders, especially as their portion of global wealth increases.

South African bitcoin pleb falling down the rabbit hole and willing to share every bump, scratch and knock along the way
View more articles from this author
PrevPreviousWhy Midwits Don’t Get Bitcoin
NextWhy Bitcoin Could Make Real Estate AffordableNext