Why Midwits Don’t Get Bitcoin 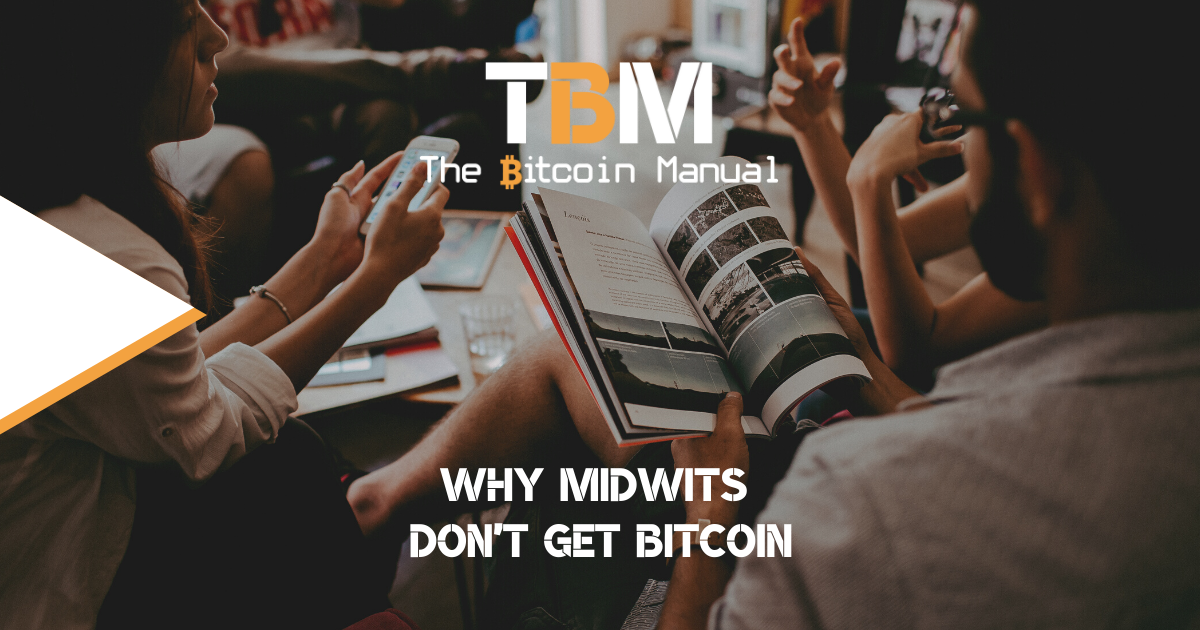 Once bitcoin clicks and your orange-tinted glasses show you a different view of the world, it’s pretty hard to unsee. Understanding bitcoin comes with a sense of hope, a sense of prosperity and a sense of purpose, building for the future.

At least that’s how many other bitcoin owners and I feel, and I have gone through it myself. I understand why we want to shout it from the rooftops and share the marvellous message with the world.

If you have tried to orange pill people, I am sure you’ve had your mixed bag of results. It’s been tough for me; very few resonate with the message, and I started to think, is it me? Is it the way I portray it?

I sat and thought about how could I convey the message in a way they would understand. I concluded that some are predisposed to get it faster than others;

No matter your primary motivation for falling down the rabbit hole, the result is the same, you become a pleb stacker.

During my orange pilling experience, I’ve found a specific subset of the normies I feel is the hardest to convince, and it is even pointless to argue with them, and this is the “midwit”.

I am not trying to offend anyone, oh who am I kidding? No midwits read this blog, and I am a toxic maximalist, so yes, I am trying to offend you. I leave that apologist culture to the Canadians; they’ll do it for me. Excuse him, for he knows not what he says, sorry guy!

To all my bitcoin canucks out there, you know it’s all love.

So what exactly is a “midwit”?

The term midwit refers to a series of memes that hilariously use IQ distribution diagrams to mock one of the three main groups represented by the diagram. The meme targets the masses or the most prominent group representing average intelligence.

The meme utilises Horseshoe Theory, implying that the groups with low intelligence and high intelligence often choose to follow the same goals while being guided by different reasoning. While those who possess average intelligence who cannot understand these contrarian views shared by both seemingly opposite parties are referred to as midwits.

Midwits are frustrated as they are neither blissfully dumb nor have the superior reasoning intelligence of a genius. They can grasp general concepts but are less capable of digging deeper, understanding nuance, or adapting quickly to complex problems, leading to an entire middle class of perpetually unhappy, often vaguely angry people.

The dismissive nature of midwits

Midwits are the type of people who will look at this article instead of trying to draw some value from it or try to challenge the ideas I put forward. They would instead look at spelling or grammar errors and say, look, this person’s an idiot. I can spell better than them; therefore, my opinion trumps theirs.

Midwits also love centralisation and authority; instead of thinking critically, they prefer to outsource their thinking to other midwits in a specific field. So since I am not a trained economist from an ivy league university, I must be wrong and know nothing about economics.

Midwits will cite quotes based on peoples titles, not knowing if they are there due to merit or nepotism. They will note studies results but not consider the biases and operation failures of those who conduct the studies. As long as it comes from what is deemed an author, it is sound logic.

Midwits also have a penchant for hierarchical structures; I see this often. They will look at someone pushing bitcoin and say, oh, he’s a mechanic; what could know that I don’t? Society favours my paper-pushing email sending job more, and I earn a better salary as compensation.

Therefore I cannot be wrong.

They will instead focus on the person’s identity over the content of their argument and would rather insult those they deem lower class than engage in a debate of ideas.

Midwits reason through referencing specific models; they don’t reason via critical thinking. You see this a lot in celebrity culture. These so-called celebrities parrot off ideas, thinking they sound smart because the concept has consensus in their groups, rather than arriving at the conclusions themselves.

The overestimations of midwits

Midwits tend to overestimate their space on the intellectual spectrum because society has rewarded them with status. They believe that because they have a job of some prestige or a fancy piece of paper from a place with old buildings, they have to be the cream of the crop in terms of intellectual rigour.

So when an idea like bitcoin comes along that doesn’t make sense when you base it on the frameworks of the fiat system, it is quickly rejected. If you believe you’re a very intelligent person and an idea seems stupid, you won’t take action to consider it any further.

The funny thing is we’ve seen throughout history that the most elegant and ingenious ideas often seem stupid to the established class of the status quo at the time.

New ideas are contrarian for a reason, as these ideas are meant to solve a problem that isn’t an issue for the established order.

So midwits navigate the world with an epistemic arrogance, being able to decide right away that something is stupid. The midwit will focus on all sorts of issues with bitcoin

The list goes on, and midwits have a smorgasbord of strawman arguments they can draw to feed their ego and dunk on as to why bitcoin is a bad investment.

Midwits think because they are of a certain level of intelligence that the intelligent thing to do is get caught in the weeds and overthink things. Instead of tackling the issues themselves, they get caught in the machinations rather than reason through each issue.

Midwits tend to be shitcoiners

Midwits that have been exposed to bitcoin for a long enough period have seen their theory that bitcoin is stupid, fail time and time again. The fact that it’s still here and continues to appreciate at a price is a slap in the face. How could this Ponzi scheme still be going for a decade?

Eventually, they capitulate but not in the way you may think; they tend to be part of the blockchain, not the bitcoin camp. Midwits feel that if bitcoin is successful, surely the formula can be replicated. So they grab hold of the tangible parts of bitcoin, like the source code and change a few variables thinking that it would turn into a better product that the market would accept.

Bitcoin and its various processes and trade-offs are more than code, and the blockchain and its network cannot be replicated; it is an organism all itself.

While understanding bitcoin can take years, the beauty is you don’t have to understand it to benefit from its number go up technology; anyone can benefit regardless of their walk of life. Bitcoin offers everyone the same rules, and therefore, they get the same results from it.

This is an anti-fiat paradigm that requires hierarchies to function and requires complexity to keep those hierarchies in place. The midwit is trained to try to deconstruct everything, and they thrive on complexity. Midwits seek to look more intelligent than they are, so if they can find something that is seemingly complex, they will jump on like flies to my dookie.

Shitcoins offer the midwit the opportunity to create this complex theatre, complexities that allow them to obscure the simple truth. The truth is that bitcoin is money, and it’s already won.

We are all subject to midwittery

Midwittery’s proliferation in today’s modern age is definitely down to how we treat education, pushing kids through this sausage factory of ideas for 12 – 17 years before we claim they are ready for the real world.

When you spend a quarter of your life in an indoctrination lab where you are taught what to think and how to reference thoughts instead of how to think, then midwittery is bound to run array.

I say this because I am guilty of it myself, for a large part of my life. I had the midwittery Windows XP installed in my brain.

Midwittery is fiat thinking; it picks convenience and instant gratification over substance. It encourages intellectual laziness to the point that it has become a cultural movement.

Humble yourself and stack sats

If you’ve hit the wall with a midwit friend who thinks they’re too smart by a half, you have to let them learn from their mistakes. It will be a tough and painful lesson, but the most brutal lessons tend to be the most impactful. All you can do is stack your sats and ensure that there are less to go around, so when they do wake up, they are rightly punished for being a smart arse.

If you’re the problem, and you now see the error in your “midwitting” ways, and you’re ready to repent, then the bitcoin community is here for you. Humble yourself and understand you don’t know everything, and that’s okay; we’re all learning and making it up as we go along. We’re all learning via negativa, and making mistakes is part of the process of learning.

Once you start to embrace proof of work in your life and understand that stacking sats in your self-interest is a fight for freedom, you will undoubtedly rid yourself of your midwittery.

South African bitcoin pleb falling down the rabbit hole and willing to share every bump, scratch and knock along the way
View more articles from this author
PrevPreviousWhat Happens If Governments Shut Down Bitcoin Exchanges
NextCountries That Have Banned BitcoinNext