What Happens If Governments Shut Down Bitcoin Exchanges

Home » Articles » What Happens If Governments Shut Down Bitcoin Exchanges 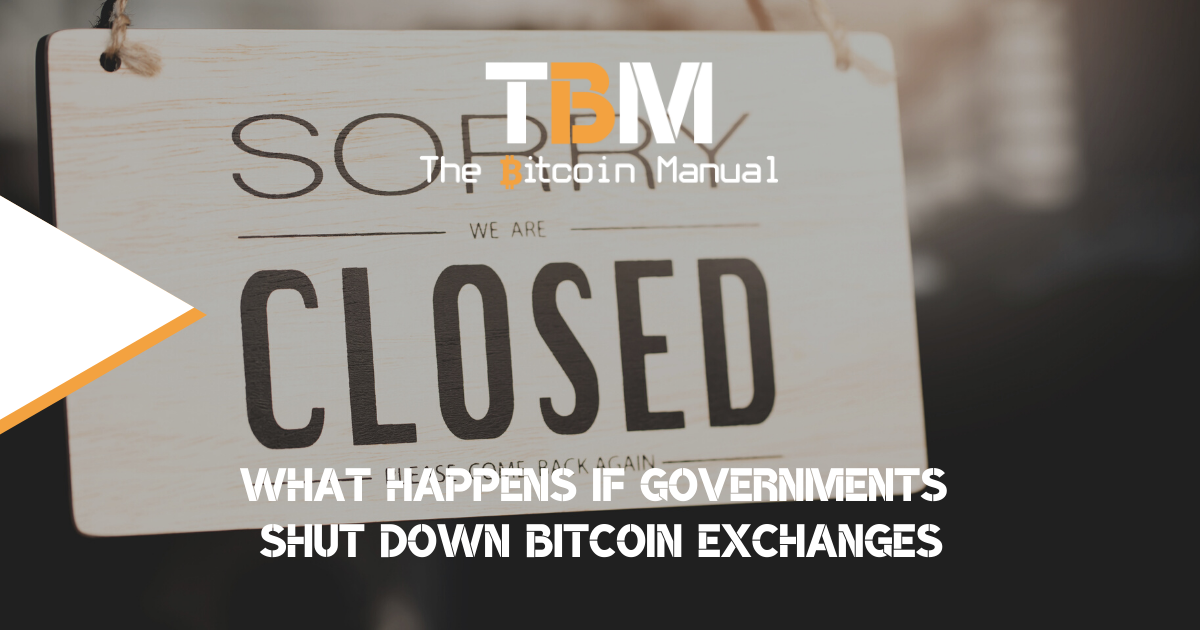 Now that China is no longer the massive portion of the bitcoin hash rate, the bitcoin naysayers need to look for a new point of failure. One of the more popular narratives of late is government regulation and the threat of shutting down or limiting access to exchanges. We’ve already seen how far governments are willing to go to ruin global business operations, so thinking that exchanges are out of bounds is rather naive.

Exchanges are also a dark market; there is plenty of fly by night operations that either don’t have the skills necessary to operate one or misjudge their local TAM (total addressable market) where they’ve set up and end up shutting down. We’ve also seen poor security and just overall bad actors running exchanges exit scams, and that makes for a great story for government intervention.

You know how far they are willing to go to ensure your safety, right?

Exchanges are central points of failure within bitcoin.

Despite bitcoins decentralised nature, it still relies heavily on centralised on-ramps via these exchanges and is an easy choke point for governments to go after.

Exchanges aren’t innocent; they are there to make money and, without competition, can exploit users who are looking for access to markets, especially ones as nascent as bitcoin. Exchanges also act like shadow banks, and with that lack of regulation, they are able to innovate faster but also take a considerable risk, a risk you may not be comfortable with as a user.

If you are using an exchange, it’s important to realise all third party services carry risk and if you do want to mitigate that risk, taking private custody of your bitcoin is always the best option.

How does a bitcoin exchange work?

A bitcoin exchange is a marketplace that connects a buyer and seller. Here, in particular, a bitcoin exchange facilitates buying and selling bitcoin for local fiat currencies or stable coins. The exchange naturally has its treasury to provide initial liquidity for assets, but clients of the site also make up the buy and sell-side of the various order books.

How does an exchange make money?

Bitcoin exchanges may have significant margins, but these margins are slowly starting to be eaten as competition increases. The fees game is a race to the bottom to retain and gain customers, and it’s a tough balance to maintain while charging them enough and providing services that they need.

Additionally, competition between exchanges heats up, and some exchanges with enough funding from external investors can efficiently pump money with low transaction fees and kill a lot of small players).

When exchanges shut down, they are either purchased by another exchange and users are migrated over to the new platform, or they redirect users to their competition once they close up shop. Regardless of how smooth the transition is, it will leave a bad taste in any customers mouth, knowing that a service you entrust your money to cannot keep its doors open.

Where do exchanges spend most?

Running an exchange isn’t cheap, and balancing your operational funds between the following:

It can quickly eat into your operating income if you are not careful, especially when dealing with assets that can fluctuate like crazy. You really need to do your risk analysis and know-how to manage your runway effectively.

What could be reasons for exchanges to shut down?

There are several reasons that could lead to a bitcoin exchange shutting down. Here are the obvious ones:

As you can see, exchanges can fail without governments having to stick their hands too deep into their operations, which is why you need to consider the way you’re using them and the risk you take leaving funds with these services.

Now, what if the big daddy government does put your local exchange under lockdown? What are your options?

If your local government comes after exchanges that service your country, it depends on their hostility towards operations.

If they allow the business to wind down operations, you should remove your bitcoin from exchanges to a self custody solution, but this isn’t a given. Others may opt to liquidate or keep their bitcoin and pay you the cash equivalent.

If governments are entirely hostile towards bitcoin and declare it illegal, they can seize your bitcoin sitting on an exchange, and you can safely kiss those coins goodbye.

Once this happens, you will have to opt for bitcoin via international services using a VPN. You could trade your local currency for an international currency or stablecoin and then use the global site to purchase bitcoin.

If the country is hostile to international operations, then the P2P option or decentralised exchanges are your best bet.

If all else fails and you’re not able to purchase, sell or transact with a vast majority of your wealth, then your final option would be to pack your bags and move to a bitcoin-friendly country.

If the bitcoin ban isn’t fully global coordination, then you’re still in luck as you could access services hosted in countries that aren’t too phased with bitcoins growth. Naturally, these countries and companies would gobble up most of the global trading activity, and all that capital will rush into those countries where it is treated best.

If by some miracle, governments band together in their detest for bitcoin and all bitcoin exchanges are shut down around the world and capital seized, it would hurt, but it wouldn’t stop bitcoin.

All bitcoin held by individuals in self custody will be available for trade and the new coins minted from the current mining operations; these coins will be the ones that provide liquidity for the open market. Miners and individuals will need to find ways to trade with one another; this can be as simple as using direct transfers via messaging apps and discussion boards or formalised P2P trading websites.

Sure, bitcoin’s price may take a bit, and it may limit access in the short term as well as capture a percentage of the circulating supply, but that won’t stop the network.

It will keep going, and all participants will adjust to the newly available supply and keep trading.

If you think decentralised exchanges will save you, this may not be true. Many of these other blockchains and DEFI apps run on centralised servers like AWS, and if governments put pressure on their infrastructure providers, they can be shut down.

In the case of assets like wrapped Bitcoin, these are held in custody with a central entity, so the bitcoin they represent can be seized by governments and provide a considerable risk due to its centralised nature.

In a case like this, these projects will either need to move to a jurisdiction that allows them to operate or run their servers from a bitcoin-friendly country.

So if the heavy hand of the government comes, don’t think you can rely on these so-called decentralised services. They are most likely decentralised in name only.

P2P exchanges will have to carry the load

Bitcoin is money, so it will continue on; the value required to create new bitcoin and the value the market finds in hard money, especially when under attack, will keep it going. It will have a market price, and in most countries, trade at a higher premium depending on how hard it is to acquire in that country.

As for your altcoins, they will wither and die; these tokens rely on an influx of new fiat to keep them afloat; without that lifeline, they would die. You would see many of these dry up as their only remaining trading pair would be bitcoin.

In a case of uncertainty, people would naturally gravitate to the strongest and hardest form of money, and this run will see altcoins defunded one by one as that value accrues to the most robust network.

To summarise, yes, governments can shut down exchanges; it will be a pain. Yes, they will be able to seize coins that investors leave with these exchanges and further limit the supply of coins. Yes, it will hurt the price of bitcoin in the short term, but it won’t stop bitcoin.

South African bitcoin pleb falling down the rabbit hole and willing to share every bump, scratch and knock along the way
View more articles from this author
PrevPreviousWhy Bitcoin Is A Learning Experience
NextWhy Midwits Don’t Get BitcoinNext