Why Bitcoin Is A Learning Experience

Home » Articles » Why Bitcoin Is A Learning Experience 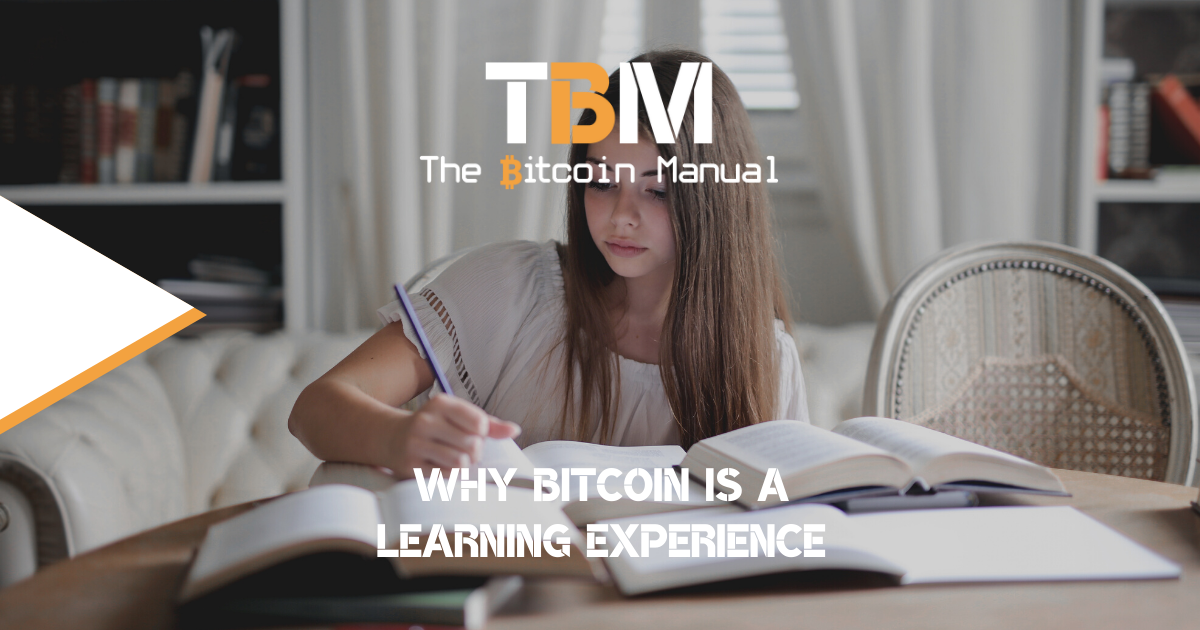 Ever since I started purchasing bitcoin, I’ve been learning; I learned through my failures to keep my bitcoin safe, and it was a costly lesson. A lesson that doesn’t get cheaper; in fact, it costs me more each year as the bitcoin price increases.

It is a reminder that if you are negligent with your bitcoin, you will be punished severely, and bitcoin will always be there to remind you of the time you took it for granted.

Instead of blaming bitcoin for the loss, I took personal responsibility. I doubled down and dove in deeper. I had to find out what I could have done better, where I went wrong. I needed to know what I didn’t know and the extent of my lack of knowledge.

I committed myself to consume as much bitcoin content as I could, listening to podcasts, reading books, reading articles. When I’m cooking, lifting weights, driving or making a bank deposit at the loo going number 2, you best believe I’m filling my brain with bitcoin information.

It became overwhelming, but it’s part of becoming a responsible bitcoiner.

That’s why I started blogging about it; it made it easier to remember things as I created content around it. It also helped me as I had a place to refer back to when I wanted to relook something or when I wanted to see the previous opinions I held.

As much as I say TBM is here to help others, it helps me first, and if others find value in it, great.

Bitcoin is hard money, and in a world of hard money where the network and the asset does not bow down to anyone, you are forced to play by the rules. It’s the same rules and same playing field for everyone, regardless of your affiliations, your skills, your intelligence, your geographical location, your religion. All those things don’t matter to bitcoin; the only thing that matters is that you accept the rules and learn to participate in the network.

No one is going to hold your hand; you have to go on the journey of self-discovery on your own and come out the other side as someone ready to make certain trade-offs because you believe the benefits of bitcoin far outweigh the shortcomings.

If you don’t want to do the work or walk the path, you don’t have to; you can get quiet anytime. You can leave the bitcoin network or never join; it’s completely voluntary.

Nothing in life comes without the trading time and energy for improvement; it’s how we humans grow and improve ourselves. If you go to the gym, you don’t say I don’t like the rules of becoming fit; you understand that they are fundamental truths, and you put in the work.

You will feel pain; it will be uncomfortable, you will doubt the results as you look at things from a short time frame. To achieve that next level, that new you, that more capable, more powerful you, you have to break barriers. The greater you become at dealing with resistance barriers, the more you will grow.

The same goes for bitcoin; I’ve seen many people do the work, have the conviction only to give up at a later stage. They’ll sell off and give into fiat gains; they’ll move to shitcoins believing their get ripped or thin quick with no work marketing and more.

Bitcoin is a constant test, it’s real wealth, after all, and the world will test you and tempt you out of your wealth every day. As a real bitcoiner, you’ll understand it’s okay to make mistakes; we will learn and grow from all of them.

If you’re not ready for bitcoin, you’ll make excuses blame everyone else but yourself and look for comfort in other things so you can avoid facing yourself and taking personal responsibility.

I recently discovered bitcoin, and I am here to fix it.

It’s an old meme or rather adage in the bitcoin space; we’ve seen plenty of people come and go, first finding bitcoin, then getting caught in the minutia of an issue they have it and falling off the wagon. I do understand where these people are coming from, but I think they’ve let ego and their need for convenience overshadow the fundamental problems bitcoin is trying to solve.

One of humanities greatest strengths is to look at a problem and find a solution, to make life easier and to get more for less. The entrepreneurial spirit of humans cannot be understated. We are constantly looking to error correct and find new, more efficient ways of doing just about anything.

The world runs on fundamental principles, but we humans have found ways around it. We are land-bound creatures, for example, but we can defy things like gravity, but it comes at a cost. We can’t stay in the sky forever, and if we do travel, we need to ensure that the trip creates more value than we spent.

Now with that level of ingenuity, we will constantly try to solve things, even if they are the wrong things. I think the fiat system is an example of humans trying to be too clever, thinking accounting tricks can solve all our problems.

That’s why bitcoin is such an existence redefining tool; it tells humans good luck wasting time trying to innovate against me. You’re probably going to waste your time, so why not use that energy, time and skill to do something more productive than mess with the money supply.

This is a hard lesson, and we see people fail at this hurdle all the time.

You learn about bitcoin, you see its promise, but you get stuck on an issue bitcoin has, and you want to fix it; I think this is the prime motivation behind shitcoins. It’s people who discovered bitcoin, found an issue they don’t like and want to build a system that resolves that issue, thinking this is what’s going to make it better.

The thing is, the issue you have with it may not be a problem to me or the majority of people. Now you’re free to launch a competing idea and try to best bitcoin, but as I said, you’re far better off doing something more constructive with your time.

People who find bitcoin broken or boring aren’t too affected by the problems bitcoin is trying to fix and are simply hobbyists thinking they can revolutionise the wheel because they made it out of liquorice.

You are living in a state of default.

The car you drive, the internet you access, the electricity you’re using feel like second nature to you now, yet these were not technologies that always existed. Those who invented and championed these technologies were met with resistance.

If you asked someone if they wanted a car during the horse and buddy era, they’d tell you roads are impractical to build, and you should focus on getting a faster horse.

It is only time that humbles us and makes fools of us all, and bitcoin is one of those state changes for the world. It may seem strange and impractical now, but in a few years, it will be the default, and you won’t know how you operated before and how you could ever go back.

If history is to teach us anything, it’s that a stubborn minority accept the new technology while the masses reject it. As the early adopters continue to benefit from the technology, the rest follow, and it becomes the new standard.

The technology never changed; it remained the same; people eventually understood that using the technology would benefit them. Their rational self-interest takes over and is motivation enough to make the switch.

Bitcoin will not change; there are far too many people with a vested interest in it remaining the same. Not only that, but they have trillions sitting in this protocol, so who will be crazy enough to make a change and risk exposing that value to external or internal threats.

If you are going to make the switch to bitcoin, you’ll have to accept it doesn’t come with a user manual and the only way to learn is by doing it yourself. You have to accept the rules and allow the protocol to change you; you don’t change bitcoin.

In the end, bitcoin is only a tool, and it requires a level of skill and understanding to use it to its full potential. Some will use it to create unique new businesses and art; others will throw it away or harm themselves with it.

The point is, you are responsible for how effective you are at using bitcoin and how deeply you understand it. The fact that bitcoin doesn’t change should bring you comfort as you can spend time learning a new skill that will remain valuable and appreciate in the future.

You can either accept bitcoin as it is and learn to work within its boundaries. Learn its sets and build together with a

Bitcoin is not going anywhere; it’s only going to grow as the traditional system fails to satisfy peoples needs, and they move over to bitcoin. If you want to ensure that you hedge against uncertainty, you need to either have resources or a skill that you know will be valuable to others in the future.

Bitcoin offers you both of that in one asset and one network.

If you want to survive and thrive, you need to learn to adapt and use tools that make you anti-fragile to risk.

Bitcoin offers you both of that in one asset and one network.

So you have a choice, you can either accept bitcoin as it is and learn to work within its boundaries. Learn its sets and build together with a sound foundation, or you can focus your energies elsewhere and pay that cost.

If you choose bitcoin, I wish you well on your learning journey and stay humble and stack sats.

South African bitcoin pleb falling down the rabbit hole and willing to share every bump, scratch and knock along the way
View more articles from this author
PrevPreviousWhat Is The Future of Bitcoin?
NextWhat Happens If Governments Shut Down Bitcoin ExchangesNext