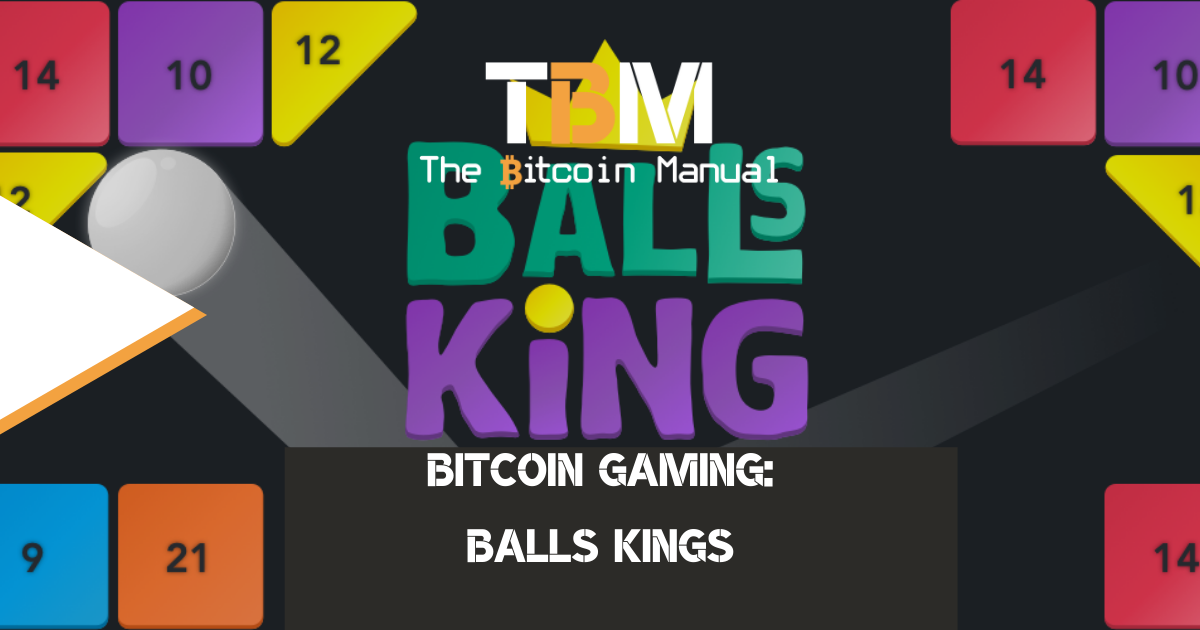 As mobile gaming and Bitcoin continue to grow in popularity and awareness, the merger of these two concepts with Bitcoin gaming is an exciting industry to keep an eye on.

I used to game a lot as a kid but for all those hours spent stacking health benefits that gaming provides, there was no way to stack sats whilst doing it. Until now.

Brick-breaking games aren’t something I have really played before but after seeing a few adverts about them whilst playing other games, I thought I’d give it a try.

In fact, the game I’ll be looking at today only just came up on my radar recently as I discovered it with Zebedee‘s latest app update, which I’ll be covering in another post.

For now though, one of their latest collaborations is with Viker and an addictive brick-breaking game called “Balls King”.

Viker is a UK based gaming start-up company that was founded in 2017, aiming to create games that encompass a bit of skill, creativity, fun and Bitcoin.

With a team that has, according to their website, been involved with some pretty big names in the gaming industry, they are well set to bring high caliber games to the fray.

Zebedee is becoming one of the go-to gaming companies to integrate Bitcoin via the lightning network into games and in October 2021, they partnered with Viker games.

Since then, they have been working on six play-to-earn games with more to come, of which Balls King is one.

What Is Balls King?

Balls King is a brick breaking game where the aim is to destroy all the bricks on the level by firing balls at them. If you have bricks left over after your shot, they move down and closer to your shooter and if you fail to destroy them by the time it reaches the shooter, you lose a life.

As you make it through the levels, you get more balls to break the bricks with. There are also vaults that randomly appear at different levels which you can break to win some sats.

On the home screen, you have a few things to take note of. From the top left working down to the bottom right:

Overall, the game plays really well with modern yet simple graphics and is generally a smooth yet addictive experience. The screen is responsive and there’s no lag or delay that I noticed when playing.

You can use power-ups by tapping the icons at the bottom of the screen during gameplay, which are:

If you run out of power-ups then you can easily get some more by watching adverts or by opening vaults after completing challenges.

At the higher levels, the game goes into “fast forward” mode which speeds things up, otherwise you would be waiting a long time for a turn to finish.

There was the odd occasion where a ball would actually get stuck at the higher levels when you have hundreds of balls in play so you have to restart the level.

Or the balls would just disappear and prevent you from taking another turn so you have to restart the level again.

However, I’m sure these bugs would get resolved in future app updates so no biggie.

The frequency of the adverts is hit or miss, sometimes you will be able to only play 2 levels before seeing an advert, other times you can do 5 or more so the advert frequency is not too intrusive. You do have the option to watch more should you wish to get extra sats though if you find a vault.

You can select “no thanks” but who in their right mind turns down free sats?!

According to their twitter profile, Viker has backing from multi-million dollar investment companies Initial Capital and Animoca Brands which are focused on developing start-up gaming companies and intellectual property rights for NFTs.

On top of this investment, there are in-game adverts that will provide a sustainable ad revenue to the company, which allows gamers to earn sats.

The partnership with Zebedee also opens up the possibilities of further collaborations and sponsorships for competitions.

How To Withdraw Sats From Balls King

Firstly, you will need to download and set-up the Zebedee app on your smartphone.

Secondly, you will need to earn enough sats in the game to take you passed the minimum threshold, which will be shown in the top right of the home screen or in a level.

Once you have enough sats, tap the sats you’ve earned and you will see the screen below.

You will need to put your Zebedee gamertag in which will be what you created when you set it up. Once you have put it in, press “redeem” and the sats appear in your Zebedee wallet instantly. Noice!

As a side note, I noticed some of the reviews on Google Play were saying the game doesn’t pay out and keeps giving “internal server error”. I had this error message as well but the sats I earned wasn’t above the threshold.

Only when the amount I earned was above the threshold, then I could withdraw so bear that in mind if you try to cash out too soon.

When you have set up your Zebedee wallet, you can also receive sats by participating in the Zebedee Discord whether its from fellow gamers or for taking part in challenges.

Although there are some limitations on how much you can store in the Zebedee wallet until you verify fully, you can still send a small amount of sats in and out of the wallet depending on your preference.

You won’t get rich with this game alone but stacking some extra sats if you have some time to kill is not to be sniffed at!

My Thoughts On Balls King

The simple concepts are often the best ones and Balls King certainly excels at that in this mesmerising brick breaker. The design of the levels changes and some of the patterns of the blocks are really cool for when you start unleashing the balls of fury.

I like the fast forward feature which kicks in pretty quickly to speed the progress of the level up and it keeps you from having to wait too long for your turn to play out.

Other than the bugs I mentioned before, which I’m sure will be ironed out with a future update, the advert frequency wasn’t too bad. I’ve played on games that are much more intrusive with the ads and it does put you off playing but the frequency of them here was just about OK although at times, did get a little over the top.

Despite these minor things, the game is worth downloading if you play brick breaker games anyway as you have the chance to win small amounts of Bitcoin so why wouldn’t you make the switch?

No, you won’t get rich playing this game so don’t plan on quitting your day job yet. Still, at least you have something that can help you get through it if you have the ahem… balls… to do it 😉

British bitcoin pleb falling down the rabbit hole and willing to share every bump, scratch and knock along the way
View more articles from this author
PrevPreviousThe Safety Of Scaling Bitcoin In Layers
NextWhy Bitcoin Tends To Crash On WeekendsNext