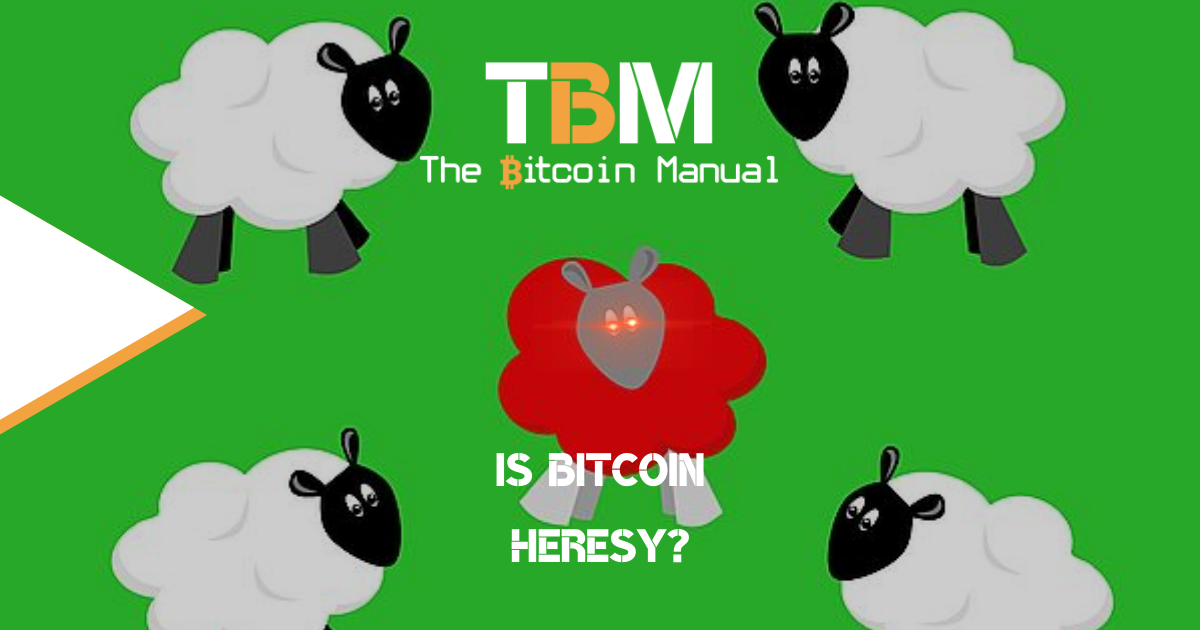 Last night, a friend had a spare ticket and invited me to a recording of a BBC radio panel show called Heresy, hosted by the ever inquisitive Victoria Cohen Mitchell, where unconventional and taboo topics are brought up for discussion with the panel and select members of the audience.

The panel consisted of a couple of UK’s finest stand-up comedians and the producer of Have I Got News For You. Out of the blue, the last topic that was brought up was Bitcoin and other “cryptocurrencies“.

Out In The Open

I was already engrossed in the recording but when this final topic was mentioned, I was not expecting it at all and found myself more engaged as I wanted to see what talking points would be brought up by everyone, given that Bitcoin is largely misunderstood.

If I remember from the audience poll, around 78% said they didn’t understand it but it’s great that it’s being openly discussed and at least talked about.

In the interest of keeping the program light, obviously there was a fair amount of comedic slur as, unfortunately, Bitcoin gets lumped in with the rest of the shitcoins and NFTs.

Then the “carbon footprint” argument came up where one of the panel mentioned about Bitcoin mining having the same carbon footprint of New Zealand, which I’d challenge as anyone with a critical mind would.

Yes, Bitcoin uses energy but the trend is towards using more renewable energy according to the Bitcoin Mining Council and energy usage is not the same thing as carbon footprint.

This topic has been covered expertly in a brilliant article from Che and highly researched by Lyn Alden, I’d recommend you read both these articles if you have been unduly affected and believe the energy FUD.

The panel themselves admitted they didn’t fully understand it and that’s OK because I didn’t understand it for years until things just started clicking after researching.

And that’s the point Victoria was making – to research and learn about things you don’t understand, rather than just dismiss it. You don’t have to be an expert, just learn the basics.

Victoria then touched on the same point that I make in my own blogs on this site when I talk about how to get started with Bitcoin and I highly respect her for giving it a chance.

This topic is around understanding what the money we use today actually is and where it came from.

What Is The Money We Use Anyway?

Quite correctly, Victoria brought up the topics of gold, why things have value, what fiat money is and why it doesn’t have value, why we actually don’t have/own money because banks can close our accounts at any moment and, more potently, why things are coming out of reach with inflation and the central banks controlling interest rates on a whim.

The tone changed to a more serious one and I was really enjoying her perspective and gentle rant about it but understood that the show would be broadcast in a family friendly time of day so she couldn’t go too heavy!

On a side note, I’d love to hear her thoughts in a more free environment where she isn’t restrained by time!

Then The Audience Were Asked…

Sadly though, it was the audience’s turn to participate and if I’d have known there was a chance to participate in this topic prior to the show, I’d have gone for it but alas!

The one person from the audience who spoke actually put on the form that he didn’t know about cryptocurrency but it turns out he did!

Victoria then asked him to explain cryptocurrency in two sentences and I braced myself.

He started talking about it and it quickly brandished words like “decentralised”, “blockchain”, “mining”, “proof of work”, “proof of stake”, “algorithms” and in my head I was like this:

Basically going from high level discussions on the panel to PhD level in the space of 10 seconds and I could hear the people in the audience around me giggling and saying “what is he on about?”

Victoria cut him out at this point but to be fair, gave him another chance to explain it later on… again he failed and went way too technical.

Although I enjoyed the show, I ended up being frustrated because Victoria had set up the Bitcoin conversation beautifully by talking about money and it was a chance to gently progress the conversation.

Here’s what I feel should have been said in two (long) sentences, which encapsulates the points Victoria brought up, for what it’s worth:

The pound, euro, dollar etc. are all controlled by central banks who get to decide how their money is issued, leading to inflation and erosion of purchasing power we’re seeing now. Bitcoin was created with an already programmed money issuance with a maximum supply which cannot be changed because it is not controlled by any central government, meaning that if everyone on Earth only used Bitcoin as money, our purchasing power can’t be unexpectedly eroded away on whim.

From here, then you can dive down the rabbit hole and learn more but keeping it at a very high level first is where it’s at! Not going straight for the technical stuff!

On an end note, I’m only interested in Bitcoin and can’t advocate for any of the other dross that’s out there. I did dabble in shitcoins, deservedly got rekt and completely regret getting involved with other projects – I should have stuck with Bitcoin from the get go.

Well over 4 decades of research went in to developing Bitcoin and it does solve a real world problem as you see above. Every other cryptocurrency out there had considerably less research and it seems most are there to line the pockets of people that created them.

So in answer to the question posed by the title of this blog, yes, I guess Bitcoin is heresy, given the dictionary definition of heresy is “an opinion profoundly at odds with what is generally accepted”.

Although Bitcoin isn’t an opinion as such, it’s a peer-to-peer money system designed to remove 3rd parties from controlling inflation on a whim. Go and read, learn, explore and enjoy your journey down the Bitcoin rabbit hole!

British bitcoin pleb falling down the rabbit hole and willing to share every bump, scratch and knock along the way
View more articles from this author
PrevPreviousWhy The Lightning Network Won’t Work For Other Chains
NextTake Bitcoin Thinkboi’s With A Pinch Of SaltNext