Take Bitcoin Thinkboi’s With A Pinch Of Salt

Home » Articles » Take Bitcoin Thinkboi’s With A Pinch Of Salt 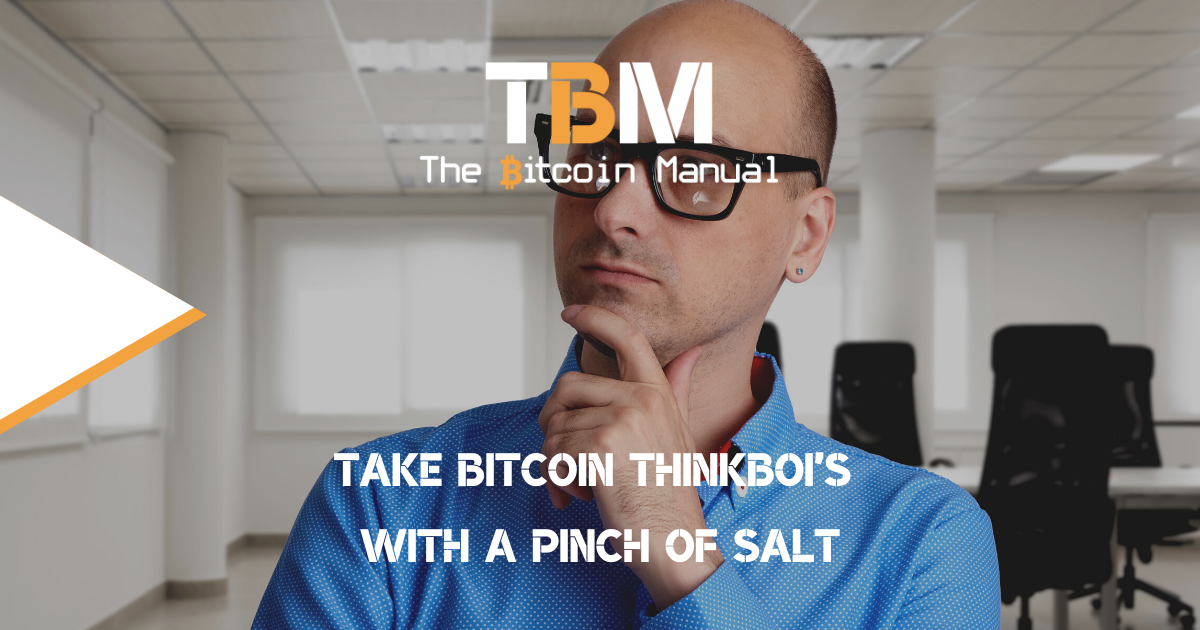 Despite being around for over a decade, bitcoin is still very much in its early formative stage of development in certain regards. The protocal is set in stone with a few minor changes lined up. Bitcoin needs to remain an efficient base layer for final settlement and the arbiter of truth, while second layers and applications can provide the more nuanced needs the market can and will have for bitcoin.

Bitcoin attracts all kinds of really smart people from all aspects of life and from all over the world. They are attracted to contribute and build out the ecosystem, create products, services or provide education to help further this grassroots movement.

Very few people can code, even fewer can run a successful business, but what is easier is spouting your brain farts on the internet. So it’s no surprise that bitcoin has attracted some so-called “intellectuals” to give us their take on what bitcoin is, was and should be, according to their infinite wisdom.

These thinkbois have found jumped on bitcoin to position themselves as an authority on something we’re all watching grow up and figure out how to use.

What is a thinkboi?

To help you identify these characters, allow me to give you a brief description. A thinkboi is someone who attempts to be knowledgable about a broad or nuanced topic but, in their attempt to explain it, either overly simplifies it or adds unnecessary complexity as if you were an expert. Offering no space for debate, and continues to regurgitate the same points without any humility or thought that they may be wrong and should be open to learning.

Jumping on a trend

Humans are incentive-driven creatures; there will always be opportunists who want to jump on a trend for their benefit. When you get in on a trend early and establish yourself as an authority, as the market for bitcoin education grows, the pie of consumers gets bigger. Getting in early means you can divert attention to yourself and attract more of those eyeballs and rack up followers easier.

I am not throwing salt, just using a pinch of salt.

As a consumer of much of this material, I can’t claim that it has no benefit in the content thinkbois create. I’ve learned plenty, and i’m sure many others do, too — a podcast or social media post can make it easier for people to learn about nearly any topic or point them in the direction of the right rabbit hole that will fascinate them.

The wider the variety of content, the more consumers you will have and variations you can enjoy, from social media posts, newsletters, podcasts, videos, books and interviews.

You can plug into your phone while riding the train on the way to work and quickly have a week’s worth of news or a semester’s worth of bitcoin information. You can get high-level topics explained to you in arguably just as high of quality as what you would get from a top-notch newspaper subscription or research service.

If you’re a savvy media consumer, a door of accessibility is opened by all of this media floating around online. I believe that this revolution of information and the movement of discourse to this freer space is primarily positive. Still, we should question what it means if the people who control the narrative have linked arms with groups trying to sell us products or their own information products.

If they’re not selling directly to you, their focus could be later monetization or to ingratiate themselves in bitcoin circles where they can access more opportunities. It’s important to remember these incentives are at play, and it will allow you not to accept what they say verbatim but see it through a lens of what they get out of creating this content.

Bitcoin is for everyone.

Since bitcoin education has not been formalised and content creators are all approaching it through their frame of expertise, you get a host of views on bitcoin that resonate with different people. Some come to bitcoin with a financial mindset, others an academic one, some the political look and each take will have a diverse following.

There is nothing wrong with looking at bitcoin through a lens you understand, but you need to accept that using your lens cuts off views that others may have, and you should be open to different angles. As a bitcoiner, it’s important to take these ideas and analyse them and formulate your own opinion.

Don’t feel like your bitcoin journey is over because you found someone who has a few hot takes that resonate with you. Try to explore other arguments, try to listen to those you may dislike and remember the rabbit hole never ends, and the learning never stops.

You may, however, want to lay off the intellectual banter and start listening to builders, coders and those creating the products you will use as a bitcoiner. Their content will play an increasingly more important part in your life now than some possible effect of bitcoin on x behaviour or x industry.

Take a critical stance on everyone.

I also believe we need to exercise caution when it comes to platforming the thinkers of bitcoin culture. Social media is, by nature, shallow and rewards the lowest common denominator content. Algorithms may be able to show us what looks good or what enrages people, but they can also prevent someone from forming an independent opinion based on in-depth inquiry.

Bitcoin attracted critical thinkers, but they’ve started to become builders. The gap they’ve left is now being subsumed by these content creators and intellectual influencers, creating a layer of new content machines not concerned with quality and reasoning but the quantity and positive metrics and echo chambered sentiment.

If we allow the sphere of bitcoin influence to moving away from critical thinkers. We move away from driving real change, promoting true-life experiences and stories to tell. Instead of the grassroots movement of education. It’s fast becoming a commoditised substrate of media which trends towards those who want to rack up the most subscribers.

South African bitcoin pleb falling down the rabbit hole and willing to share every bump, scratch and knock along the way
View more articles from this author
PrevPreviousIs Bitcoin Heresy?
NextBitcoin Gaming: AmazeballsNext