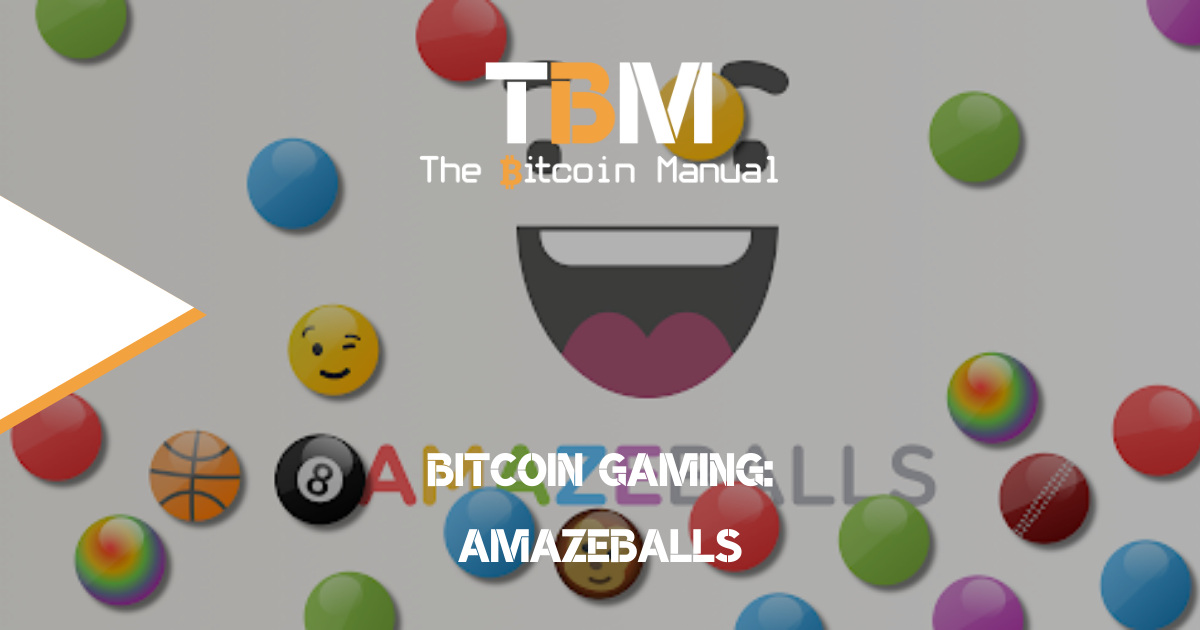 I know, what a name for a game that is! And I can assure you, it’s real! The other thing that’s very real is the plethora of Bitcoin Games being developed thanks to the introduction of the lightning network!

This is one industry that I’m always excited to write about due to the growing popularity of both gaming and Bitcoin, plus the fact that I’ve always had a penchant for gaming since I grew up on various consoles.

Some say it’s misspent youth, I say I was reaping the health benefits and if I had Bitcoin games to play back then, I’d have a few more sats than I do now but that’s by-the-by!

The fact is, there’s no reason for you to carry on playing those traditional games that take all your data and give nothing in return when there are loads of fun alternatives.

One such game is the superbly named Amazeballs from Viker Games.

I covered the collaboration between these two Bitcoin Gaming companies in my previous run through.

In short, they joined forces in October 2021 to integrate Bitcoin payments via Zebedee’s wallet to Viker’s mobile games suite, of which there are currently 6 with more in the pipeline.

Amazeballs is a puzzle game for your smartphone where you need to make lines by placing balls on a grid.

These balls are given to you in sets of three, which are in different formations and number of balls, with the aim to leave enough space on the grid so you can place the next set of 3.

There are different game modes you can play either daily, weekly or just for casual “amazeballing”:

Each day, there’s a jackpot wheel that you can spin to earn some sats and in the game, if you manage to collect 3 “jackpot balls”, you will be able to earn a few more sats.

On the Home Screen, there are a few buttons to select and options to explore – here’s what they are, starting from the top left, moving to bottom right:

On the whole, the game is a smooth experience and I didn’t experience any lag when playing on my smartphone. The graphics are simple but effective and the button response was instant.

There are adverts in the game that appear after you’ve completed a quest, earned some sats from the jackpot ball or wheel or just finishing a regular level.

However, these aren’t too intrusive and you’ll often be playing a level uninterrupted for a good few minutes before you need to see the next advert as your skills improve in the game.

I didn’t come across the jackpot balls too often but these do appear once per day. You won’t be earning too many sats so don’t expect to get rich. Instead, the point of the game is improving your logical thinking skills with the sats as a bonus.

As mentioned in a previous TBM article, Viker has multi-million dollar backing from companies such as Initial Capital and Animoca Brands, which help develop start-up gaming companies and provide IP rights for NFTs.

Add to that, the in-game adverts provide ad revenue and the partnership with Zebedee allows further collaborations and sponsorships for future competitions.

How To Withdraw Sats From Balls King

In order to get those hard earned sats out of the game, you will first need to set-up the Zebedee app on your smartphone.

After this, you need to have earned enough sats in the game above the minimum amount, which will be shown in the top right of the screen.

If you have reached the minimum amount, tap the number of sats you’ve earned in the top right and you will see the screen below, with a very happy face greeting you!

Simply type your Zebedee gamertag in the box and then press redeem and boom! Your sats are sent to your Zebedee wallet and you can get back to earning them in the game again!

My Thoughts On Amazeballs

Amazeballs is another really good, simple and satisfying game from Viker here and out of the two I’ve reviewed so far from them, I’d say this is better than Balls King in terms of gameplay.

Maybe that’s because I enjoyed playing Tetris and it has that kind of feel about it. Especially when you manage to clear multiple lines and everything just slots in to place!

The only issue I came across was the game freezing one time at the end of one of the quests after I had also cleared the jackpot balls in the same level. Once I earned the sats, the game wouldn’t continue and I had to re-do the quest again. Other than that, I didn’t have any problems.

Cashing out was as easy as putting the balls down on an empty grid but bear in mind, you won’t be earning enough from this game alone to hand your job notice in. However, it’s a good time filler and a relaxing game to play, which may help with the fiat mining.

And to be fair, earning sats whilst playing games is pretty Amazeballs in my book 😉

British bitcoin pleb falling down the rabbit hole and willing to share every bump, scratch and knock along the way
View more articles from this author
PrevPreviousTake Bitcoin Thinkboi’s With A Pinch Of Salt
NextWhat Are Lightning Network Stable Coin Channels?Next