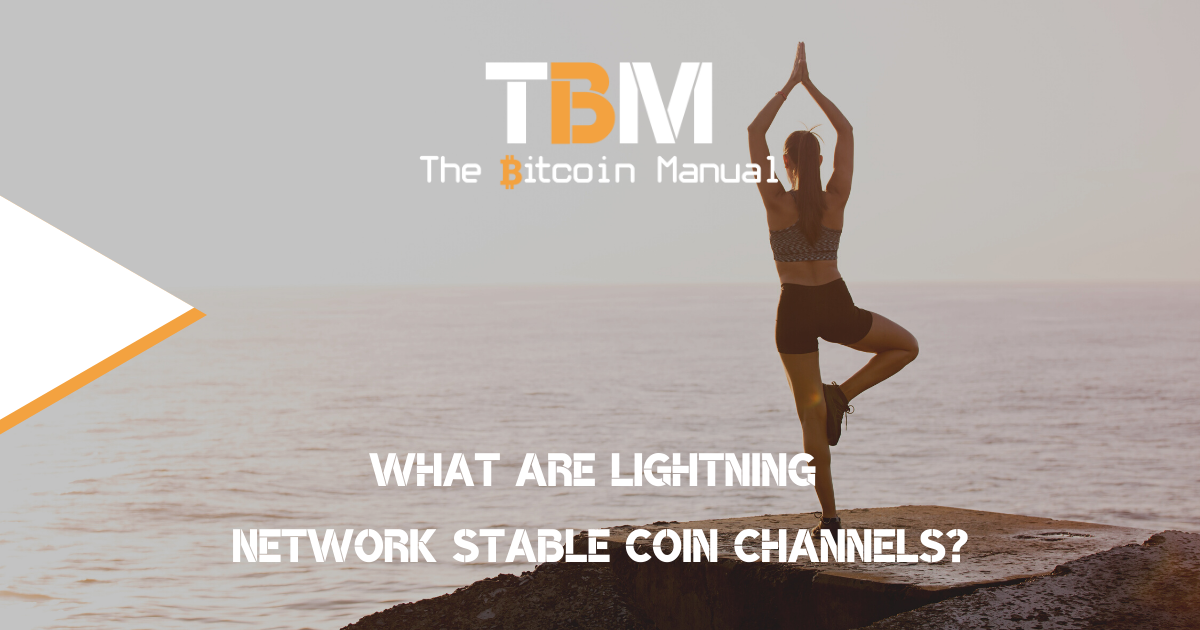 To bitcoiners like myself, satoshis are our stablecoin, but sadly we’re in the minority with that idea. Most people live, work and think in fiat currency units, which is evident in the cryptocurrency space, with stablecoins being a massive part of the market.

Bitcoin’s final settlement capabilities are far superior to the way we move value in the fiat system, so for fiat to compete, they needed to go digital. The current stablecoin system isn’t built on a stable footing, ironically enough, when it comes to centrally backed entities holding dollars or dollar reserves and minting these tokens on a chain to represent one dollar, for example. We all accept that these entities are fully backing the value and trade based on that faith.

Bitcoin is meant to reduce that reliance on third parties and counterparty risk, and these two systems now work in parallel in many cases, such as exchanges and through atomic swaps.

Funny enough, the stablecoin market first launched on bitcoin using the Omni-protocol with Tether (UDST) but has since expanded to a multi-chain asset. Tether is now available on the Liquid Network and a host of other altcoin blockchains.

Personally, I think stablecoins are another shitcoin we should move away from in the future. Practically I understand its role as a bitcoin continues to monetise, and people are still tied to the fiat system.

So as the demand for stablecoins increases, developers and companies in the bitcoin space are looking at new and innovative ways to integrate stablecoins into the network, all with different trade-offs.

Then there are proposals such as:

What are stablecoins via balanced channels on lightning?

I will tackle the other two implementations in other articles. Still, for the moment, I would like to focus on the concept of stable coin balanced channels using the lightning network.

This idea is still in its formative stages, but it doesn’t mean we cannot look at the possibilities of how it will work and how it could affect bitcoin. Bitcoin is still a bit early, so anything built on top of it is even earlier in the concept stage.

But let’s get down to it; the idea for stablecoins on lightning leverages another technology set known as DLCs or discreet log contracts. Using a DLC, you would establish a lightning channel with another counterparty and say, I want a stable coin, let’s say $10 worth.

In the DLC, you would stipulate the terms and the oracle or oracles you will trust to maintain the price feeds. Then in the agreement, you would say at this time, the channel will rebalance. In this example, it’s set for a month from now. Once that time frame passes, the DLC will execute, and the number of sats on each side of the channel will change depending on how the price changes of Bitcoin in the stipulated fiat currency.

The use of DLC contracts is a novel one and something to be excited about but, I think, is far away. So it might still take a few years before we have this DLC contract.

The reason why I find this implementation attractive is that with lightning and DLC contracts in theory. We will be able to have an equivalent to USD in the world with very minimal trust to any counterparty; bitcoin provides the backing and the final settlement layer.

Stablecoins for any country

The stablecoin is predominantly US-centric, with USD backed stablecoins taking up the most significant share of the pie. It makes sense that people would want dollars as it is the world reserve currency and can be a hedge against your local currency. There are other stablecoins available for different countries, but they aren’t as popular and would need a central authority to manage each instance, adding more complexity and counterparty risk.

Not having a local stablecoin can be a pain since people in countries with sovereign currencies want to transact in that currency. Using these stablecoin rebalancing channels, individuals can use bitcoin to back different currencies and create balanced channels for all sorts of currencies as long as their a demand and an oracle data feed to support it.

Having bitcoin as the base layer of this stablecoin implementation makes it far more robust and flexible to different market needs.

The need for stablecoins is massive, with it fast approaching a total of 200 billion in USD value across all the various implementations. If consumers start to move over to bitcoin-backed stablecoins, that drives up demand for bitcoin because you need it to back the channels. Additionally, you’re locking up bitcoin into the lightning network, leaving less on the open market and could put more upward pressure on the price.

The higher Bitcoin goes, the fewer sats you need to maintain those channels and stablecoin balances, and who knows how this new use case and demand could affect bitcoin’s relative value compared to fiat currencies.

The fewer people need to leave the bitcoin network, the less need to sell the bitcoin and drive down the price, so it could be a pretty bullish situation.

This could add a layer of complexity for normies and pre-coiners who are just looking to exchange balances, so UX will be important if the UX cannot be smoothed out, I would imagine there would be custodial service managed channels. These custodial services would abstract away the complexity for the novice user so they can simply send and receive the fiat currency of their choosing.

Possible centralising of the tech

My one concern would be having a robust market for people willing to offer liquidity to create these balanced channels. I would imagine that exchanges would still be the largest liquidity providers, and it could mean more bitcoin sitting on exchanges, but this is just speculation at this point.

If we can have a market where people are charging different fee rates for their channels, it could be a way to drive down costs and keep bitcoin off exchanges and locked into the lightning network instead.

Having more liquidity on lightning and state changes, we will also need more lightning nodes and watchtowers to keep states up to date. Watchtowers are also needed to penalise people who are trying to pull a fast one on novice users of the technology too.

Despite the gross devaluation of fiat currency, I don’t see it disappearing anytime soon, and the stablecoin market will continue to grow. The larger these stablecoin markets become, the more liquidity is locked on shitcoin chains as one of their saving graces for the moment.

Suppose bitcoin can have stablecoins with less counterparty risk and less KYC oversight, and cheap transaction fees. I could easily see it start to gobble up liquidity from centralised stablecoins and the chains running them, and turning into a massive death blow for shitcoins.

South African bitcoin pleb falling down the rabbit hole and willing to share every bump, scratch and knock along the way
View more articles from this author
PrevPreviousBitcoin Gaming: Amazeballs
NextWhat Are Synthetic Stablecoins On The Lightning NetworkNext