What Are Synthetic Stablecoins On The Lightning Network

Home » Articles » What Are Synthetic Stablecoins On The Lightning Network 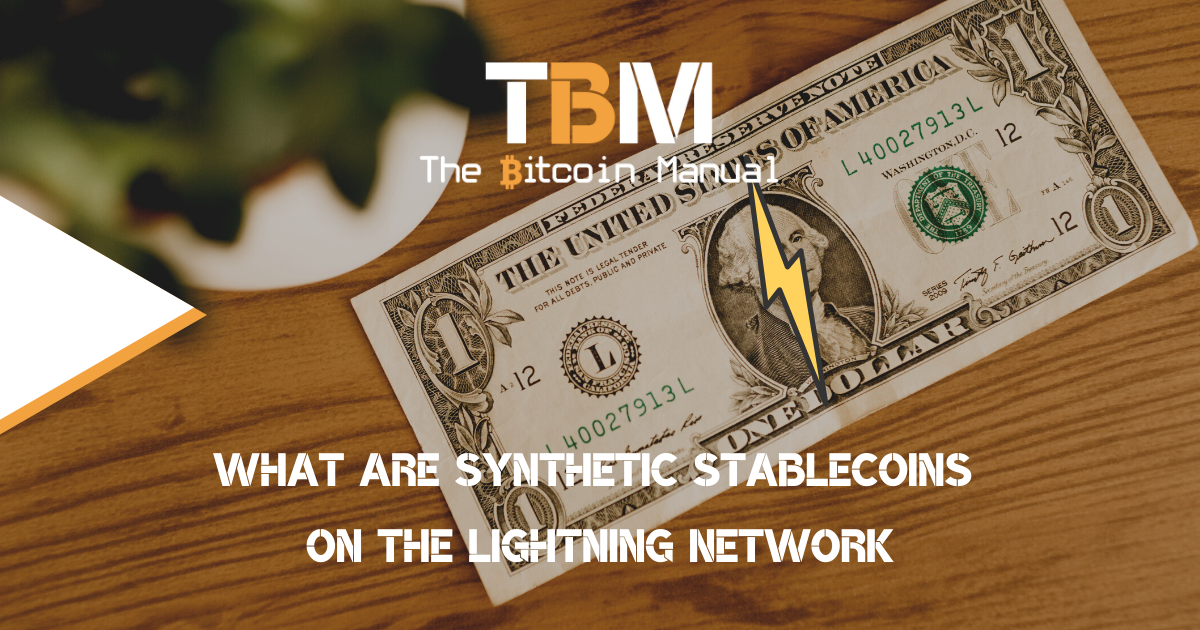 The debate on Bitcoin becoming a medium or rather satoshis continues to rage on, but to me, its a debate based on recency bias and not one that entertains the eventual slow down of bitcoin price appreciation over time in percentage terms and in volatility as liquidity deepens and adoption spreads. Spending bitcoin today can be a bit of a ball ache because we still think in fiat and any goods and services are still fiat priced.

To help with the medium-term adoption of bitcoin, the idea of stablecoins that are interoperable with bitcoin has become a popular pitched solution with a range of technological variations on a proposed method. Currently, if you are in need of stablecoins but want to remain inside the bitcoin network, your best bet would be to peg into the Liquid Network and swap it for Tether (USDT).

The problem with USDT on Liquid is that it’s not interoperable with all Tether. If the merchant accepts USDT on another chain, you’re going to have to find an exchange to swap it over to that chain, and it can get pretty clunky. Tether essentially has several walled gardens that don’t talk to each other. Then add to the fact that USDT on Liquid is relatively tiny at 36 million of their over 60 billion supply and you can see that stablecoins within the bitcoin ecosystem has not got the legs.

But there are other proposals in the work such as:

What are stablecoins via derivative contracts on lightning?

A way to bring stablecoins to the Bitcoin Lightning Network (LN) with the use of financial contracts backed by Bitcoin is currently in the works. There would be no real native token, so to call it a stablecoin isn’t correct, but for simplicities sake, let’s roll with it since the idea of this porduct is to mimic what a stablecoin would do. Essentially this would use bitcoin to create a roughly pegged synthetic value using that would exist on layer 2.

These synthetic currencies are financial products that imitate another without actually using it can be generated from derivatives available on various exchanges that integrate the Lightning network.

Kollider a company that allows perpetual contracts to be operated through the Lightning Network spoke about these synthetic stablecoins in a thread of Twitter.

How would synthetic stablecoins work?

In detail, and as explained by Kollider, a bitcoin-only synthetic stablecoin is created by receiving payments in BTC and holding a balance of $10,000 in bitcoin at the end of a current month (assuming bitcoin is above $40,000).

Thus, you can take that sum (equivalent to just over 0.25 BTC) and sell it in dollars on reverse perpetual swaps with 1x leverage. This can be done directly from an LN-enabled node or wallet to a Lightning-enabled exchange, taking advantage of the speed and immediacy of transactions running on that layer.

Then, when bitcoin trades above $40,000, 0.25 BTC would be needed as margin to short $10,000 of BTCUSD inverse perpetual contracts at 1x leverage. When you want to recover the USD 10,000, you will only have to enter the exchange again and close the short position of that sum in dollars.

This will allow the amount of bitcoins equivalent to USD 10,000 to be recovered.

Relatively stable value but not really a stablecoin

The point of stablecoins is to reduce volatility, and with these contracts, you’re not guaranteed to be able to hold that $1 value all the time as massive price changes in the market can affect the way the rebalancing can be done on these derivative platforms.

Since you would need to buy bitcoin and then lock it into lightning to use this porduct, you’re leaving less on the open market and could put more upward pressure on the price. However, I don’t see this option for stablecoins being rather popular with the average user, but rather something traders would use as a way to move in and out of dollar value when needed.

It is not a stablecoin but another option for bitcoiners.

To me, this just seems overly complex and moving towards creating arbitrary financial products backing bitcoin doesn’t sit too well with me. If others want to use it, that’s fine, but I don’t see how it solves the need for the average person to hold and pay in stablecoins.

Having a balance that nets derivative positions in a custodial app is not a Stablecoin. Then considering there is no token, it makes it harder to trade and not fungible with other USD balances.

Sure, you can hold a USD balance with custodial service like Kollider; that’s one thing but compared to effectively having a token on LN that can be moved from one wallet to another without any custody is a different ball game and solved altogether.

Added to the custodial risk and a return to a single point of failure issues, this stable coin solution doesn’t bode well for the future.

South African bitcoin pleb falling down the rabbit hole and willing to share every bump, scratch and knock along the way
View more articles from this author
PrevPreviousWhat Are Lightning Network Stable Coin Channels?
NextWhat Is LN-URL And How Does It Work?Next