What Are Stablecoins On The Liquid Network?

Home » Articles » What Are Stablecoins On The Liquid Network? 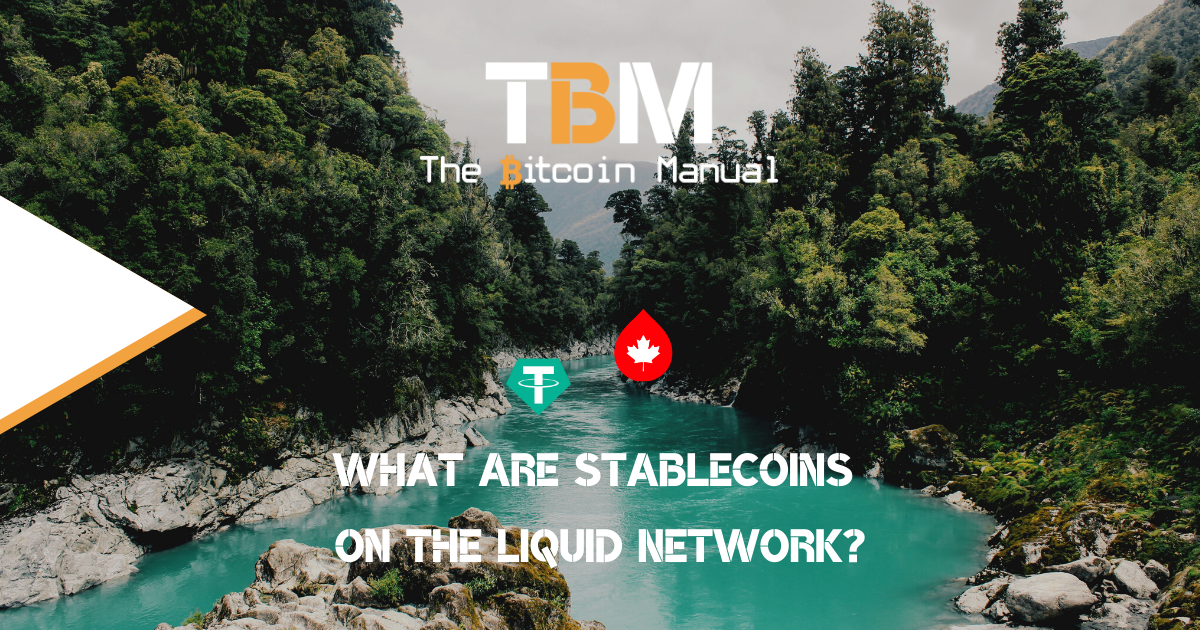 Stablecoins are a hot topic; some love them for their ability to settle instantly worldwide, while others see them as a regulatory headache. Some bitcoiners believe that stablecoins are shitcoins, but we have to understand others don’t see it that way and still like the idea of a fiat denominated token.

The relationship between stablecoins and bitcoin will only continue to grow, and we can see that by the amount of chatter around incorporating stablecoins into bitcoin via second-layer solutions.

Moving stablecoins to the sidechain

One method of using stablecoins on a bitcoin network is via the Liquid Network, a sidechain protocol built on top of the Bitcoin blockchain. The Liquid Network was created by Blockstream but is governed by a federation of parties and operated on an open-source blockchain platform called Elements which can be run on a Liquid Node.

Since the Liquid Network is a separate environment, its development is much faster, and new features can be deployed that may not sit well with the bitcoin base chain.

The Liquid Network has a host of different features as a trade-off for centralisation, such as:

Creating multiple assets can come in the form of NFTs, Security token offerings, and, of course, stablecoins. The Liquid Network has several stablecoins on it already, but the most popular are, L-USDT and L-CAD.

USDT or Tether is a cryptocurrency that began on the OMNI Layer of bitcoin but later expanded and now hosts on several blockchains, including the Liquid Network. The USDT tokens on Liquid are known as L-USDT or Liquid USDT, or Liquid Tether.

Its tokens are issued by the Hong Kong company Tether Limited, which in turn is controlled by the owners of Bitfinex. USDT is the largest stablecoin provider in the world and, due to its size, is seen as a systemic issue for bitcoin.

Liquid CAD is a non-custodial prepaid payment system denominated in Canadian dollars. Units of Liquid CAD (L-CAD) consist of vouchers issued on the Liquid Network as confidential bearer assets that can be transacted peer-to-peer using a Liquid wallet.

Liquid CAD is not a general-purpose “stablecoin”. It is a closed-loop Bitcoin prepaid card. It can exclusively be redeemed for Bitcoin on the Bull Bitcoin platform (or at affiliated merchants). Bull Bitcoin is the only counterparty, and it cannot be redeemed for a Canadian dollar payment.

It is substantively the same as Canadian Tire money.

Unlike stablecoins, Bull Bitcoin makes money with L-CAD by driving the sales of Bitcoin on its platform and doesn’t collect interest on the deposits of Liquid CAD users.

For more on L-CAD, review the terms on issuer BullBitcoin

Like all other closed-loop prepaid instruments, Liquid stablecoins have counterparty risk. The owners trust that they will eventually be able to use Liquid stablecoins as a payment method to fund their accounts, make purchases, or trade for Bitcoin.

These funds held in your wallet are merely a token claim used to execute Bitcoin purchases when L-CAD or L-USDT is “backed” by the dollar deposit with a third-party custodian.

Where can I get Liquid network stablecoins?

You can purchase L-USDT from any exchange that supports the Liquid Network, simply choose the withdraw to Liquid Network wallet option once you’ve purchased your USDT.

How do I store Liquid network stablecoins?

You can store your Liquid Network stablecoins in any wallet that supports the Liquid Network. You can use the same address structure as you would an L-BTC transfer for any L-Asset and withdraw your funds to your non-custodial wallet where you hold the private keys.

Unlike L-BTC, which can be swapped or pegged out for BTC on the mainchain, USDT and L-Stablecoins aren’t interoperable with the same asset on another chain.

This can cause a lot of confusion, as you may want to pay someone who accepts USDT but not on the Liquid Network.

There are ways of swapping your L-USDT for USDT on other chains to pay providers who use other blockchains, which isn’t a streamlined process. Swapping your USDT across chains would add additional block time confirmations on two chains, including swapping extra fees, mining fees, and additional risk.

A temporary move toward a bitcoin standard

Stablecoins on a bitcoin side chain can attract users, liquidity, and commerce, as people settle in a currency they understand and feel comfortable using. It gets them into the ecosystem; it provides exposure to using wallets, the software, and with atomic swaps, more accessible means to acquire bitcoin.

Once you’re on a bitcoin standard, you see satoshis as your stablecoin, but that path to bitcoin pleb is a long one, so until then, we’ll have to provide accommodation for stablecoins.

South African bitcoin pleb falling down the rabbit hole and willing to share every bump, scratch and knock along the way
View more articles from this author
PrevPreviousBitcoin Gaming: EscapeQR
NextWhat Are Honeypot Shitcoins?Next