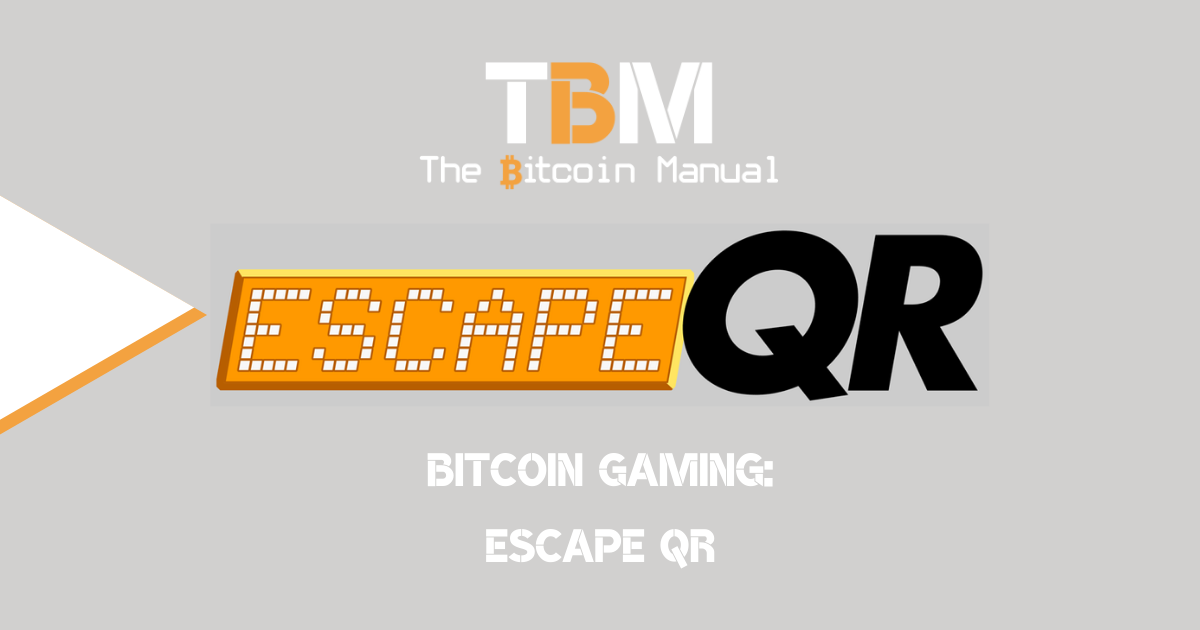 Even though the lightning network is a relatively new area of Bitcoin development, it has been steadily growing and enables fast and very low fee transactions between different wallets, which is ideal for tipping gamers, livestreamers, even your favourite musicians.

This is all part of Bitcoin’s scaling solution where the strong foundation of the main chain allows products and services to be built on top of it for the masses.

The more I dive into applications on Bitcoin, the more I’m thinking that gaming is the perfect fit for getting people into Bitcoin.

I’ve covered quite a few games that have integrated Bitcoin and the lightning network already and there seems to be more popping up every time I look!

One that caught my eye recently is a variation of a classic arcade game called Pacman, which many of you will probably be familiar with. This Bitcoin version is called EscapeQR, let’s find out more.

When you create a regular lightning invoice, it generates a QR code. Well, with EscapeQR, the QR code is the map and your aim is to escape it!

It sounds easy but you’re against the clock and you’re getting chased down by fiat currencies, which are rather like the ghosts in the original Pacman.

You also need to break down walls to clear a path and collect 4 Bitcoin stacks before the exits appear. By breaking down walls, new red walls appear which you can’t break down. Beware, the fiat can cross through the red walls so you need to think fast!

This game has been around since 2019 and it does look like the creator, Keith Mukai, has moved on to developing SeedSigner, which is a secure signing device for sending Bitcoin.

The graphics of the game use the classic 8-bit format and keep things really basic, just like the old games that focused more on gameplay, EscapeQR adopts the same approach.

At the moment, you can only play the game on PC or laptop with your keyboard by going to the website, using left, right, up, down arrows and the space bar to blast through the walls.

There are no adverts to worry about with the game as it used to be “pay-to-play”, rather like the old style arcade games where you’d put a coin in to the machine to have a go and see how far you get. However, there is a free game mode you can play on.

In the early days of the game, it used to cost you 100 sats to play but there was an active faucet that gave you some sats so you could play around with the lightning network and the instant transactions.

It seems that the pay-to-play version has been stopped but there is a free version of the game that allows you to play and learn about the lightning network.

Just from looking around the site, there is a strong focus on educating players around the lightning network but there isn’t a way to earn sats from this game at this moment in time.

So what was the point in writing this article about it?

Well, my hope is that one of the other gaming companies out there who are active in the space will read this article and maybe contact Keith to integrate the game in to their own platform.

Personally, I think the concept of the game is brilliant and it is addictive as I found myself playing the free version of the game for a while and it opens up plenty of possibilities to make this a Bitcoin game.

Plus nostalgia is a strong emotion to tug on the heartstrings and get more people in!

Just thinking out aloud here but maybe players can make wagers with a lightning invoice to see who can get the high score each week. Or each Bitcoin stack collected is a ticket that puts you in to a prize draw to earn some sats.

In any case, bringing Bitcoin to the classic arcade games that a lot of us came to know and love is a winning combination and what better metaphor for escaping fiat can you get with EscapeQR?

British bitcoin pleb falling down the rabbit hole and willing to share every bump, scratch and knock along the way
View more articles from this author
PrevPreviousWhat Is The Blockstream Mining Note?
NextWhat Are Stablecoins On The Liquid Network?Next