Does Tether FUD Matter To Bitcoiners? 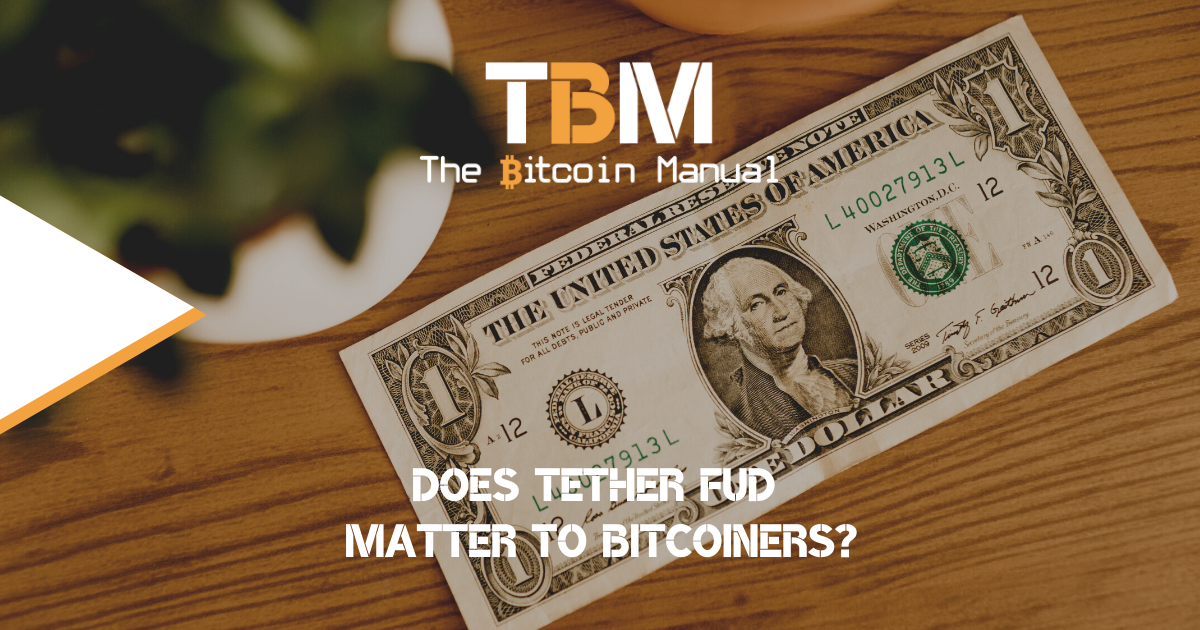 Becoming a bitcoiner is easy; anyone can do it; you create an account with an exchange, hand over your contact details, send your money over to fund your account and click buy. Nothing could be simpler; once you have your bitcoin, you can LARP with the other bitcoiners online. Yes, you are now in a particular club of people who own bitcoin since this form of money isn’t widely accepted.

When you hold the world’s most pristine collateral, get ready to be tested, boys and girls. Everyone wants a sniff at those sexy orange panties you got on, and they’ll say anything to get into those pants of yours. There is always a new narrative or a rehashed old narrative circulating trying to bully people out of their bitcoin.

If you have not done the research and built your conviction, you may fall for it. We all fall for FUD sometime or other in our bitcoin journey, and it’s okay; you’ll learn fast how hard it is to get back to your position once you make that initial mistake to sell.

One of the more tired yet popular FUD pieces has to be tether stories of imminent collapse. Every few months, someone will tweet about how the size of USDT keeps growing and that it’s the catalyst for bitcoin growth, and it will soon implode, and bitcoin will be no more.

So what is all the tether FUD about, and why does it matter?

What is the issue with Tether?

When USDT launched back in 2014, it was under the guise that every single unit of USDT would have a corresponding US dollar sitting somewhere in reserve. Owners of US dollars could, in theory, purchase USDT with their US dollars and later reclaim US dollars in exchange for USDT. Any redemption of USDT for US dollars would require Tether Holdings to destroy that Tether upon redemption.

Now, this all sounds good in practice, and it probably could be done; however, the success of Tether would see incentives change. Not surprising, as in any monetary system where the rules cannot be verified, and there is a centralised entity in charge, USDT would be subject to change.

So what were these rule changes? One of them was the redemption of USDT for US dollars; it became clear that Tether would no longer be allowing USDT holders to redeem their, which was an initial concern. Not having the ability to lay claim to the reserves means you cannot test the liquidity of the funds, and Tetehre effectively eliminates the change of a bank run should people get spooked about their operations.

The second significant change was USDT would no longer be backed 1-1 with US dollars but rather US dollar investments. In fact, according to a release by Tethers holding company, only 4% of its holdings lie in cash.

The breakdown is as follows.

Now there is nothing wrong with investing your treasury in trying and earning an additional income and protecting your reserves, but it does make USDT relatively illiquid. In addition, the proof of reserves has never been verified by any reliable source. So it remains a doubt if even this breakdown is there to back the USDT in circulation.

These two issues have led some to believe that Tethers are completely unbaked and that new issuance is created out of thin air and used to buy bitcoin and keep the market artificially inflated.

I’ve only really tackled the two main issues with Tether, but many other problems are surrounding the stablecoin and the various entities involved. There is a lot of nuance to this case, and you can read more about it in articles like:

Note: Be sure to do your research before using a stablecoin like Tether and understand what risk you’re taking by owning one of these stablecoins.

The size of Tether

Now, if we consider the issues around these allegations, the larger USDT gets, the larger the so-called problem for bitcoin having so much of its buying backed by the ticking time bomb. Currently, USDT alone sits at 78 Billion USD and makes up almost half of the current US dollar-denominated stablecoin market.

That’s a sizable chunk of change and well over $2 billion in trading volume for bitcoin alone across its various exchange market pairs of USDT to BTC. Tether has undoubtedly benefited bitcoin trading and opening up new markets but would it be the killer blow for bitcoin?

The claim behind salty no-coiners is that if Tether is found guilty of wrongdoing and collapses, it takes all that liquidity. As funding from USDT dries up, bitcoin will be taken down with it never to be seen again. These doubters have been harping on about USDT since it sat around the $10 billion mark, and as it continues to grow fast, approaching the $80 billion mark, the voices keep getting louder.

When you see the numbers involved, it’s easy to get spooked and think that USDT could be a systemic issue to bitcoin, but it’s not. If USDT died tomorrow, sure, it would take out a considerable trading volume temporarily from the system. Sure the market would panic, and people would dump their USDT and their bitcoin as investors try to get out of any assets that are classified as risky.

The market price for bitcoin would surely take a big hit short term, but as large as USDT is, it is not the only game in town. Trading between stablecoins is prevalent, and traders will try to salvage as much as they can from USDT and move it into other stablecoins instead.

We should see massive growth in the other stablecoins as market participants look to protect their holdings. Some of that value may also flow into bitcoin as people look to get out of USDT and BTC/USDT being one of the most liquid pairs around.

In addition, standard currency pairs like USD, GBP and even non-USD stablecoin pairs could help pick up the slack as investors look to secure their funds and ride out the drama.

A market correction like this may be brutal in the short term, it may also unravel a lot of leverage on the way down, further pushing down prices of assets, but I don’t see this as an irrecoverable moment for bitcoin.

Unlike shitcoins that get all their value from their trading pairs and their tether to stablecoins and bitcoin, bitcoin’s value doesn’t come only from fiat capital flows. If USDT were to go down, I am sure it would take a lot of the altcoin market with it, and a lot of that value will try to find its way to other stablecoins or back to bitcoin in a consolidation.

The market may be erratic during these times of uncertainty, but it cannot change bitcoin’s operations or its fundamentals; nothing would change in bitcoin despite the market sentiment. Bitcoin’s value doesn’t only come from people trading USDT for bitcoin but from people buying bitcoin with over 100 different fiat currencies. Bitcoin has hundreds of fiat currency pairs worldwide, all providing it with liquidity. Sure USDT is a large part of that, but there is a far bigger market that can continue to support bitcoin.

Stablecoins are part of the broader cryptocurrency ecosystem, but it doesn’t mean they are the lifeblood of the ecosystem reserved for bitcoin.

Stablecoins are a distraction

I don’t use any stable coins; while I can see their use case for traders and cross-border payments, I have no use for that right now. I think stablecoins are simply another shitcoin to distract you from bitcoin. Since stablecoins are anything but stable and inherit the purchasing power of its backing, it still makes it a poor method of storing value across time, which is what I and other bitcoiners are looking to do.

We are trying to get as many satoshis as we can to store our unused and excess purchasing power in the best store of value the world has to offer. We’re not trying to beat an unknown amount of currency debasement each year, trying to take on risk and borrowing our stablecoins to the highest bidder for a return.

While a minority are using stablecoins to purchase goods and services, a large part of it is trying to speculate and find safety in the cryptocurrency trading market, a system that offers very little productive value, so why should we even care about stable coins?

They merely offer a solution that banks and legacy finance have yet to absorb into their remit. Something that will eventually occur through acquisition or regulation and stablecoins will be part of the legacy rails because it’s the only way it can survive.

The more stablecoins lose purchasing power based on their underlying backing, the more returns investors need to keep ahead of that debasement. The more they’ll look for risk and leave stable coins behind, become an investment tool. To keep that risk from rolling out of control, stablecoin issuers will have to fall into the banking system as they become a more significant part of dollar distribution worldwide.

The more controlled and regulated, the less free from censorship these tokens become and eventually reduce their cross-border appeal. Stabelcioins are a stop-gap solution for bitcoins current volatility, and if you can stomach it, you won’t need to worry about stablecoins.

Bitcoin will eventually absorb that value and make stablecoins irrelevant, especially the non-USD stablecoins. So why are we worrying about the tail wagging the dog?

South African bitcoin pleb falling down the rabbit hole and willing to share every bump, scratch and knock along the way
View more articles from this author
PrevPreviousHow To Send Bitcoin Through Discord
NextOptions For Storing Your Bitcoin Seed PhraseNext