Home » Articles » Why Does Money Creation Require A Cost? 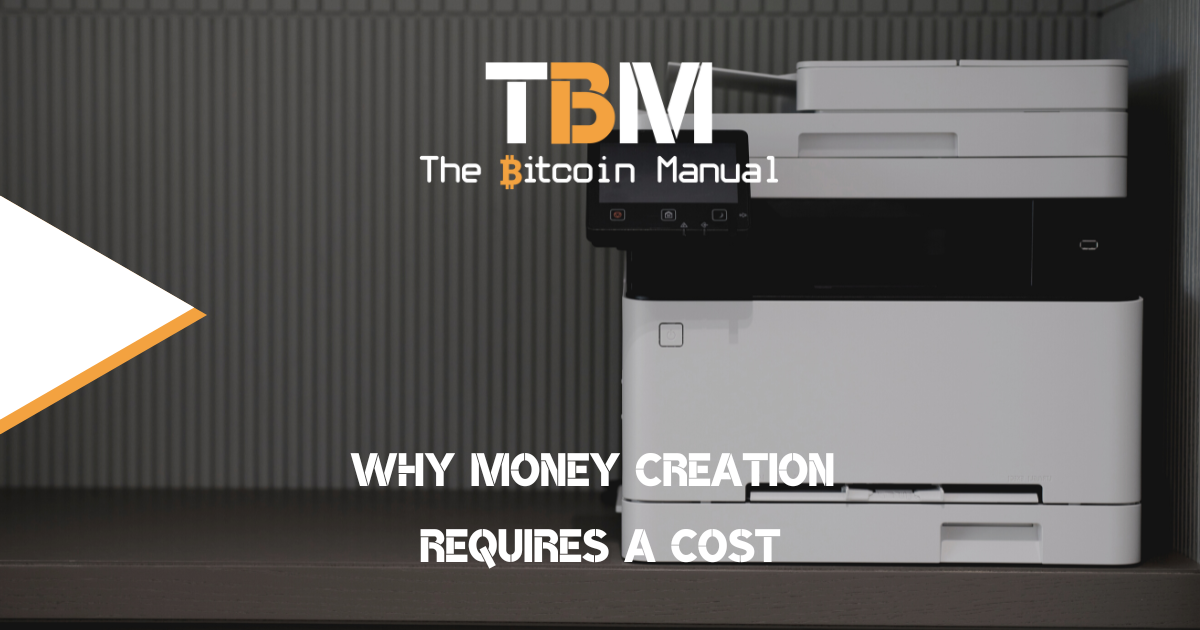 To verify transactions, bitcoin mining computers are required to solve ever more complex math problems and the first one to provide the correct hash gets to secure a new block to the network. This is the proof of work consensus mechanism that underpins the network. When Satoshi mined the first few blocks, miners were relatively scarce, and competition was low, but as the network grew. Competition for bitcoin rose; more of these computers came online and demanded energy, drastically raising the network’s energy-intensive nature.

Today the bitcoin mining process can consume nation-state amounts of electricity each year. Still, it also secures nation-state-level wealth while transferring wealth around the world cheaper, faster and without restriction, better than any network on the planet and does so with less waste per unit of energy than any fiat system.

Proof of work inherent to bitcoin to keep the network secure, to keep issuance fair and to maintain the monetary policy, which has to adjust based on supplied hash rate and its limited supply.

The heated debate around proof of work

Hundreds of thousands of computers distributed worldwide are looking for the cheapest energy available so they can keep pace in racing to solve the next block. Miners of all sizes worldwide are using electricity they paid for. Instead of using that electricity for entertainment or other economic activities, they choose to secure the bitcoin network in hopes of receiving bitcoin as a reward. This keeps the network robust and decentralised while also ensuring all network participants are honest.

Critics of proof of work tend not to focus on the benefits of this consensus method, nor the efficient use of the energy flowing into the network, but rather a simplistic view of the amount of energy used and making the case that the energy could have been used for other economic activity or simply not used at all.

While so much debate centres around how much energy and labour is pointed at supporting the bitcoin network, I’ve heard very few, if any ask, why money should have a cost to produce.

How is money used?

Money is merely an accounting system, and its primary function as that good people use for exchanges of items of value, so it needs to represent value. Money also has secondary functions that derive from its use as a medium of exchange; others should be willing to accept it in exchange for goods, services, time and labour.

Due to money’s use as a medium of exchange for buying and selling and as a value indicator for all kinds of goods and services, money can be used as a unit of account.

That means money can track changes in items’ value over time and multiple transactions. People can use it to compare the values of various combinations or quantities of different goods and services.

Money as a unit of account makes it possible to account for profits and losses, balance a budget, and value the total assets of a company.

Money as a store of value

Money’s usefulness as a medium of exchange in transactions is inherently future-oriented. As such, it provides a means to store a monetary value for use in the future without having that value deteriorate.

So, when people exchange items for money, that money retains a particular value that can be used in other transactions. This ability to function as a store of value facilitates saving for the future and engaging in transactions over long distances.

Despite bitcoin’s volatility, it can indeed be used as a unit of account to price items in bitcoin, it has its own individual units of measurement, and it’s able to store value and move over time and space. Bitcoin does have the attributes needed to be money, and today a tiny cohort of people operate on a bitcoin standard.

Why does an accounting system need to use so much energy?

Humans are distinctly good and drive down the cost of producing something. If we find something the market values, we will stop at nothing to be able to produce more of it so that we can satisfy the needs of more people and to secure the rewards that come with satisfying those needs.

Money being a need and a good is no exception to the rule, and we already live in a world where our money has no cost to produce since we’ve driven down the cost to create fiat money. We’ve moved on from the need to mint coins or print notes; while they still exist, they make up a tiny fraction of money in circulation.

Today, the majority of money is created digitally, making it cheaper than ever to create and allowing for issuers of currency, namely governments, the ability to maximise their seigniorage.

Seigniorage is the difference between the face value of money, such as a $10 bill or a quarter coin, and the cost to produce it. In other words, the cost of producing a currency within a given economy or country is lower than the actual exchange value, which generally accrues to governments that mint the money.

Under this system, an elected few get to create and deploy money in certain parts of the economy first; this central planning can cause massive distortions in markets and benefit those who get to access that new money stock first. Each time new money is pushed into the system, everything needs to be repriced under the new flow of money, and we see prices adjust as the market catches up.

Since there isn’t a real physical limit and only a psychological limit on inflation, governments can continue to create money and misallocate resources which have resulted in massive wealth gaps. Since fiat money has a negligible cost to capital, there is very little incentive to act responsibly.

Why do I need to go out and create products and services when I can simply create money which lays claim to all the existing products, services and assets?

What Is the cost of capital?

Cost of capital is a calculation of the minimum return that would be necessary to justify undertaking a capital budgeting project, such as building a new factory, starting a business, farming produce and more. Cost to capital encompasses the time, materials, energy and money required to produce goods and services.

The term cost of capital is used by analysts and investors, but it is always an evaluation of whether a projected decision can be justified by its cost. Investors may also use the term to refer to an evaluation of an investment’s potential return in relation to its cost and its risks.

Under proof of work, you now have a tether to the real world; you can now map out in real time what it would cost you to go out and compete for the new stock coming online. If you are in a position that provides you with favourable conditions to mine, it would be rational to do so.

If not, you wouldn’t.

Bitcoin and its proof of work method provide a baseline cost to capital that economic actors can use to decide if they should focus on bitcoin mining to pursue the stock or focus on other economic ventures to pursue the flow of bitcoin.

Providing a base for energy and productivity

The bitcoin economy is still in its formative stages, with a lot of it being misunderstood, particularly the mining sector. The energy consumption of bitcoin isn’t something that needs to be “solved” or “reduced” its a signal to market actors that this is the floor price of energy, certain commodities and labour.

Instead of trying to hide or dilute the signal, we should embrace it and use it to guide rational economic actors looking to find positive yield in all markets.

If you find a compelling reason that works within your budget, go get hashing. If not, why not consider fiat mining and producing value in other parts of the economy that could net you some bitcoin in exchange?