Home » Articles » What Is Bitcoin’s Next Difficulty Adjustment? 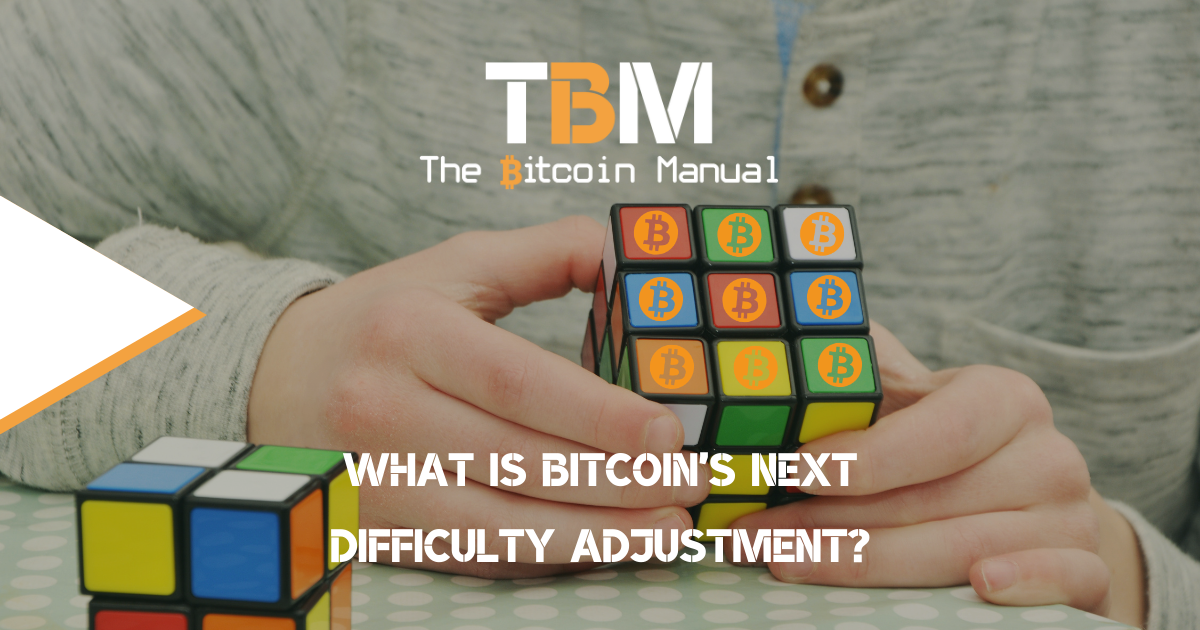 As the Bitcoin mining industry continues to grow and innovate, one important metric that those who run miners keep their beady little eyes on is the “difficulty adjustment“.

The reason being that if the difficulty of mining a Bitcoin block increase or decreases, it will then determine the profitability of your mining operation.

This is a feature of the Bitcoin protocol which makes sure the security of the network is maintained and adjusts automatically depending on how many miners are online in a given time period.

When blocks (batches) of transactions are embedded on Bitcoin’s blockchain by specialised nodes called miners, those miners receive a reward in the form of Bitcoin.

It makes sense then that more and more companies are setting up Bitcoin mining farms with a plethora of ASICs as they look to get a piece of the pie before the next halving event.

Ordinarily, the target time for Bitcoin to create a new block is 10 minutes. However, if more miners come online and solve hashes quicker, the protocol will adjust the difficulty to bring it back to 10 minutes.

Alternatively, if miners then go offline, as was the case with the China ban in 2021, then the difficulty will be reduced, again with the aim of about 10 minute block times.

Note: Further reading on how Bitcoin mining actually works is recommended if you want to learn more.

Between each difficulty adjustment, there is a period (or epoch) of 2,016 blocks where the blockchain self-monitors how quickly each block is produced.

Thankfully, there is a very useful tool called the “Difficulty Estimator” that was created by the team at Bitrawr which saves you having to dig out the calculator yourself and provides a pretty accurate estimate of what the next difficulty adjustment will be.

The snapshot above (taken on 29th May 2022) shows you all the relevant details of the current state of affairs with the blockchain’s difficulty.

In this example, the blocks are currently being added to the chain ahead of schedule, indicated by the current pace metric.

If this trend continues, then it’s likely that the next difficulty change will make mining a tad more difficult for our ASIC workers but who knows what may happen between now and then.

In any case, the good news is that as the difficulty increases, Bitcoin becomes even more secure and requires more energy, more capital and investment should any bad actors wish to attack it.

What Difficulty Adjustments Mean For Miners

An increase in difficulty adjustment means that you’re likely to be getting less sats each day if you’re in a mining pool and will make finding that block a little bit tougher if you’re riding solo with a home miner.

Whereas a decrease in difficulty means you’re likely to be getting more sats assuming that all other things are equal such as electricity costs and your miner is running without any repair issues.

There are a few considerations when it comes to Bitcoin mining from my pleb experience, which I’ve outlined below should you wish to get involved:

There are probably more things to think about but these are the main ones and it does depend on your situation of course.

To help give an idea of the trends between the average Bitcoin mining cost and Bitcoin’s price in USD, the chart below from MacroMicro should provide some interesting analysis for you.

Whether or not Bitcoin’s price goes below that of mining costs with so much investment in the space remains to be seen.

How Can I Start Mining?

If you’re interested in starting Bitcoin mining, I’ve been using the services of Cyberian Mine which was recommended by Jason Deane (who runs the Bitcoin Pioneer program in the UK and has been mining for many years).

They use green energy from hydro and allow you to get started by buying fractions of a miner so you can test the waters (pun very much intended)!

It is a hosted service which has its own advantages and disadvantages but if you wanted a breakdown of the different options out there, have a read through our mining section and see what appeals to you the most.

Are you mining Bitcoin? How have you been finding it with the difficulty adjustments? Let us know in the comments below.

British bitcoin pleb falling down the rabbit hole and willing to share every bump, scratch and knock along the way
View more articles from this author
PrevPreviousWhat Is A Bitcoin Blow-Off Top?
NextBeware The Altcoin Army Of Grifters & GrovellersNext