When Is The Next Bitcoin Halving?

Home » Articles » When Is The Next Bitcoin Halving? 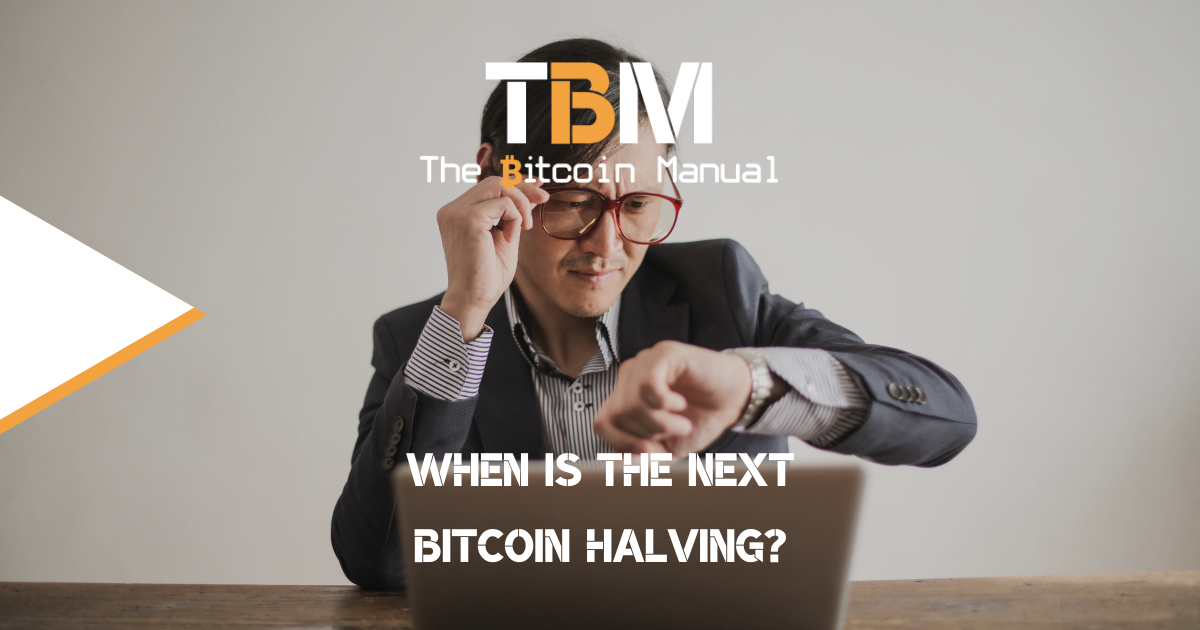 One of the biggest events in the Bitcoin ecosystem, at least up until the final Bitcoin is minted in 2140, is a phenomenon known as the “Bitcoin Halving”.

It’s always much anticipated due to the price action with eye watering bull markets followed by soul destroying bear markets, particularly if you fell in to the traps of shitcoins!

When looking at the price charts of Bitcoin’s 13-year history so far, it tends to follow what happens with the halving as traders, investors, analysts, and plebs alike try to make sense of it.

In order to do that, it’s probably a good place to start by understanding how new Bitcoins are brought into existence. Then you’ll know what the Bitcoin halving actually is before you go all guns blazing and FOMO in at the wrong time, get rekt and cry yourself to sleep at night.

How Are New Bitcoins Created?

Bitcoin uses a protocol called proof-of-work to ensure that every transaction and every sat that moves from one wallet to another across its network is validated, verified, and accounted for.

To do all that, nodes (computers) that are dispersed across the world communicate with each other to verify those transactions.

They then batch these transactions up into blocks and send them on to specialised nodes (ASICS) called miners which then bake these blocks on to the blockchain every 10 minutes.

Because the specialised nodes have to spend energy, electricity and work to put those blocks of transactions in to place, they are rewarded for their efforts in Bitcoin to help pay for the cost.

The only way new coins come into existence is through mining and those who do either HODL or go to exchanges to sell them to pay for electricity costs, which puts them on the open market.

If you wanted to know the full process on how Bitcoin mining works with a non-technical analogy, you can find it here.

What Is The Bitcoin Halving?

Essentially, the Bitcoin halving revolves around the already determined release schedule of Bitcoin, until all 21 million coins have been unleashed in to the wild, with the last satoshi (fraction of a Bitcoin) coming at some point in 2140.

When Bitcoin was first rolled out by Satoshi Nakamoto on 3rd January 2009, the genesis block was created which had a mining reward of 50 Bitcoins. This was the reward that remained for successful miners for the next 210,000 blocks.

As each block time takes about 10 minutes, it can be estimated that 210,000 blocks equals about 4 years (~1,458 days) so there’s almost an exponential decay effect on the issuance of new coins.

When Is The Next Bitcoin Halving?

The great thing is that this release schedule hasn’t and will not change as it simply won’t be Bitcoin if the code is changed.

That means that we can predict with some degree of accuracy about when the next Bitcoin Halving will be with these known times.

Thankfully, if maths isn’t your strong point, you don’t need to worry as there is a very helpful website called “NiceHash” that live tracks the Bitcoin blockchain and shows you exactly how long is left until the next Bitcoin halving.

This information is important for all network participants to know but it’s probably the Bitcoin mining farms that pay the most attention to it as it is vital information for their profitability.

Add to that the other factors involved in mining Bitcoin and you have a whole industry around not only securing this voluntary network but also how the coins are distributed should miners need to sell to keep their operations afloat.

As I’m a bit of a numbers man, I find the tech side fascinating and, having contacts in the mining scene, there’s plenty of facets to this ever evolving industry.

Of course, the number I’m focusing on right now is the growing the number of sats and being armed with knowledge around Bitcoin’s halving events is one way to help maximise this.

British bitcoin pleb falling down the rabbit hole and willing to share every bump, scratch and knock along the way
View more articles from this author
PrevPreviousDealing With Shitcoiner Stockholm Syndrome
NextHow To Buy Non-KYC Bitcoin On The Lightning NetworkNext