How Is Bitcoin Secured?

Home » Articles » How Is Bitcoin Secured? 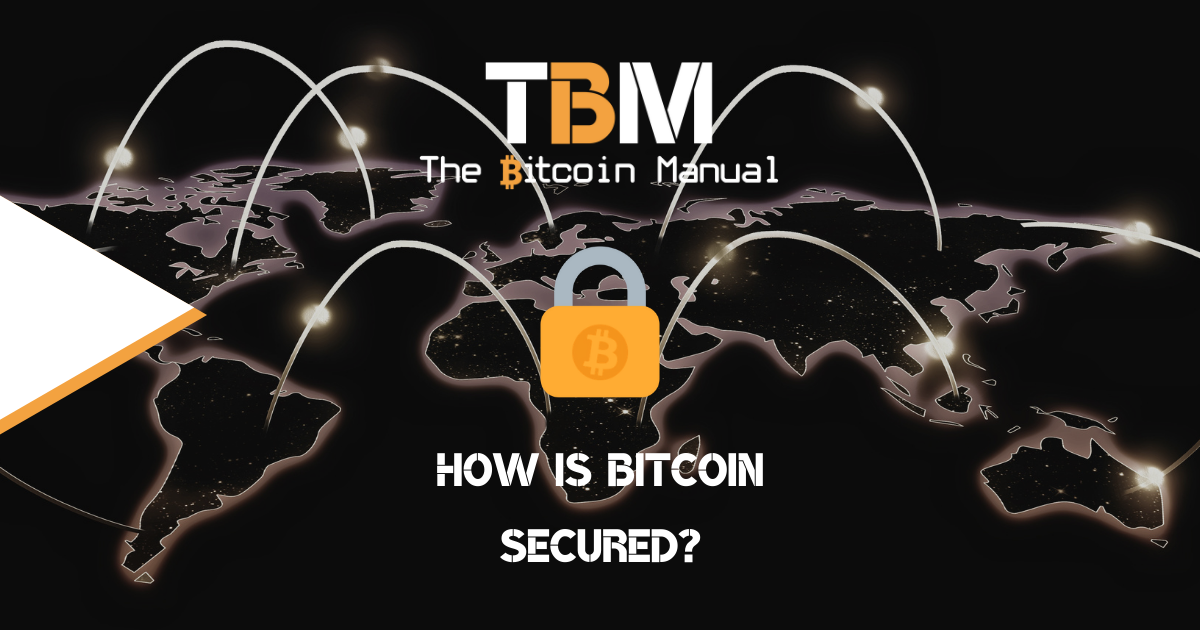 This question is a bit like a dice in that it has multiple sides to how you can answer it.

If we’re talking about how to safely secure your Bitcoin then I’d point you towards one of the many cold wallet solutions where you withdraw your Bitcoin from an exchange to these wallets and keep it offline.

If we’re talking about ensuring you have good safety practices so you can keep those sats for a long time in to the future, then you will need to consider creating your own Fort Knox.

However, I have seen a few discussions recently on social media that point towards the security of Bitcoin’s blockchain itself and it got me thinking to dig in a little more to this.

Who Nodes What’s Going On?

Bitcoin is essentially a security software with the application of being a peer-to-peer digital form of cash. It uses blockchain technology to ensure transactions from one user to another are 100% true.

These transactions are added to the rest of the transaction history, known as a ledger, which is shared across many tens of thousands of computers, called nodes.

What these nodes do is ensure that the Bitcoin hasn’t been spent twice and verifies all transactions before miners etch those batch of transactions on the chain.

The nodes will then check the new batch of transactions to make sure they don’t violate Bitcoin’s protocol, which is a continuous process that happens every 10 minutes.

If miners do create a bad block which gets rejected by the nodes, then they will have wasted time and energy (electricity) which is costly.

Despite what the FUDsters says about miners having all the control of the Bitcoin network, it’s actually not true because it’s the nodes who verify that the rules are followed and they have all the Bitcoin transactions since the genesis block.

How Many Nodes Are Securing The Bitcoin Network?

As you can see, nodes are the guardians of the Bitcoin network and have an extremely crucial role to play in maintaining its integrity.

When Bitcoin first started, there was only one node, that of Satoshi Nakamoto and so if he/she/they shut off their node then that would be the end of it.

Thankfully that wasn’t the case and more people got on board to run their own nodes to verify the rules of the blockchain over the last 13 and a half years.

In fact, the more nodes that join, the more decentralised Bitcoin’s network security becomes as there’s no single point of failure where things can go wrong.

There’s a helpful website called Bitnodes, which shows you how many “reachable nodes” there are securing the transactions across the world.

At the time of writing, there are over 15,000 nodes worldwide but these are just the ones that are “reachable”. Some nodes are likely on VPN or have some other mechanism that means that they can’t be reached or are potentially harmful.

When all things are factored in, Bitnodes estimates that there are over 200,000 nodes but this needs to be taken with a pinch of salt.

Either way, that’s a lot of nodes and over time, this number will likely go up as people look to verify their own transactions, rather than trust others.

Aha, that’s all well and good but…

What If The Majority Of Bitcoin Nodes Were Hostile?

A valid question and one that could strike fear in to the unsuspecting noob but thankfully, this is as much of a red herring as the energy FUD so we can breathe easy.

There has been a marketing campaign recently that has tried to “change the code” of Bitcoin to be less energy intensive but as we discussed earlier, the nodes are the ones that ensure Bitcoin’s proof-of-work system stays in place.

So the FUD around a 51% attack on Bitcoin nodes came to the forefront and we can look back to Bitcoin’s past to see how changing the code panned out.

All you really need to do is look at hard forks such as Bitcoin Cash and SV to see that the market pretty much chose Bitcoin Core (BTC) as its preferred money.

That’s the market’s decision but what about the attack on the nodes?

Not Your Node, Not Your Code

It’s important to note that nodes don’t “vote” on anything like in a democracy, they are just there to enforce the rules of the social consensus, i.e. people who like Bitcoin.

Bitcoin is a voluntary network that people participate in if they like the rules of consensus – such as the halving schedule, 21 million coins, block rewards etc.

If you try to change the rules of a voluntary network such as Bitcoin with hostile nodes, then it isn’t Bitcoin anymore as was seen in the case of Bitcoin Cash et al when they changed the code of BTC. These other forks just went off and did their own thing (and failed) but it just simply isn’t Bitcoin.

Therefore, if you try to run a majority of hostile nodes that changes the code of BTC, it really doesn’t matter because the Bitcoin Core nodes simply will not communicate with them and will carry on running Bitcoin anyway.

To summarise, if a rogue company decides to buy up 20,000 nodes and run a different version of Bitcoin, they can but it won’t be Bitcoin and none of the true Bitcoin nodes will communicate with them so they can literally have fun staying poor, especially if the evidence from previous hard forks are anything to go by.

At this point, the idea of Bitcoin is almost impossible to kill and technologically, it’s incredibly robust. The only thing to worry about are social attacks on it such as energy, hostile nodes and all the other FUD that gets sprayed around. All of which we’re all too happy to shut down on TBM.

If you’re thinking of running your own Bitcoin node, you can find out more here

British bitcoin pleb falling down the rabbit hole and willing to share every bump, scratch and knock along the way
View more articles from this author
PrevPreviousWhat Are Fall Back Payments With BIP21?
NextHow To Earn Bitcoin From The Sun With Sun ExchangeNext