What Are Fall Back Payments With BIP21?

Home » Articles » What Are Fall Back Payments With BIP21? 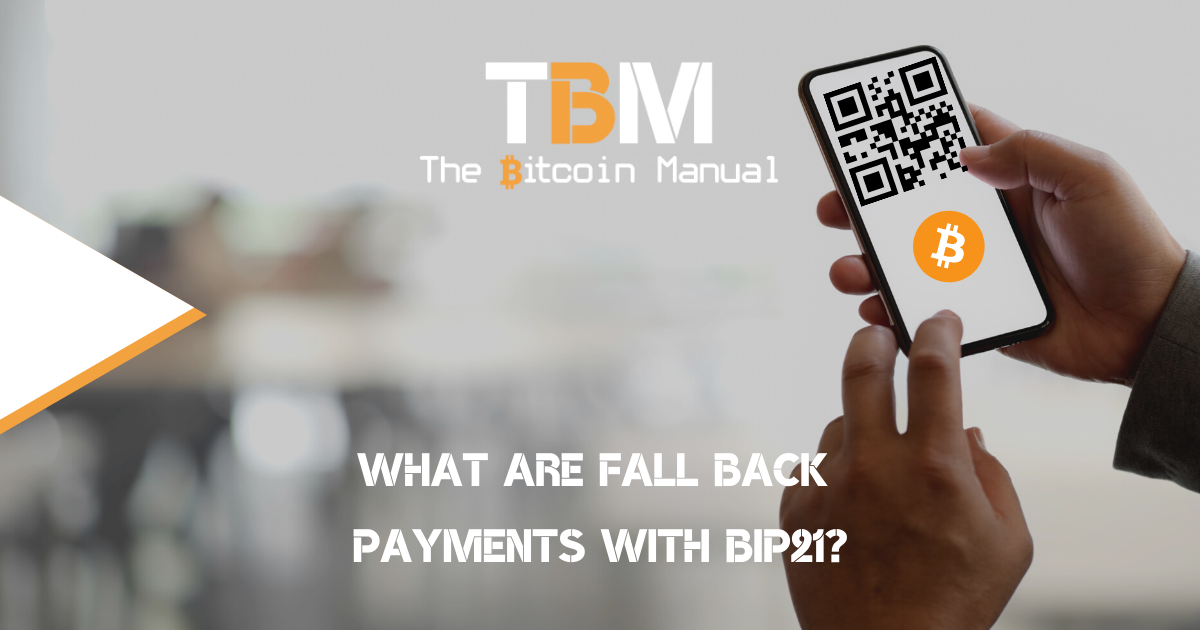 Scaling bitcoin into layers was not going to be easy; for us who enjoy the innovation in the space, it’s fun to mess around with different wallets and solutions, but this is a niche of people. Normies want the PayPal/Venmo experience if they are going to get into using bitcoin.

Yes, I know they’re lazy and need to learn that being your own bank takes work and trade-offs, but they don’t care. I don’t make the rules, okay? I am stating the obvious.

People are lazy, and if something is complicated, they shy away from it. Don’t get me wrong; bitcoin payments have become so much smoother over the years; wallets have really done a great job but translating that UX across layers is a different story.

The idea of a cold wallet, hot wallet, and lightning wallet may fly now, with us maxis, but in the future, it needs to become a seamless experience where the UX provides an optional abstraction of pain points some users want to avoid.

One such pain point is picking the right layer to make a payment.

Onboarding a normie into bitcoin is hard enough; if you’ve ever tried to orange pill a precoiner, you’ll know what I am talking about, and with shoddy UX, it hurts your case. Let’s say you want to onboard your friend with a non-custodial wallet; you will have to shill out mining fees with a main-chain transaction, and that can get pricey, but introducing Lightning adds to the complexity for newbs.

I mean, they are just getting to grips with public and private keys, and now you’re telling them that they need to establish an LN-URL or Lightning Invoice; by then, you would have lost them completely.

Instead of all that drama, BIP21 enables you could get friends and family to use a protocol that simplifies the process. If added to the wallet, unified addresses would be an opt-in service for Lightning-enabled wallets. Once implemented, this should eliminate the need for different on-chain and LN UI tabs and make the transacting process much smoother between various wallets.

So instead of having to explain L2, you can set up a wallet for them, set up unified addresses and ping them sats over Lightning and watch their brains melt.

If wallets support both on-chain and Lightning, it would be helpful to the user to default to the option that offers the lowest fees, which in most cases is going to be Lightning.

In edge cases where the on-chain fees are lower than Lightning, then the wallet could opt to send on-chain or even present the user which a choice. The wallet could check base chain fees or the cost for the hops and suggest the best route for the size of the payment, encouraging the efficiency of the bitcoin network’s resources.

How kind of your wallet to tell you:

Unified addresses are already out and about in the wild, the same as Lightning Email Addresses; some wallets have them, others don’t, which can be a bother as it limits interoperability.  There are several lightning wallets and exchanges that support 1 of the BIP21 features but none that offer all three options.

To be fully BIP21 enabled your wallet needs to:

The first step toward expanding this option is for bitcoin wallets to add the feature first. Once all bitcoin wallets have received support and testing, it’s then up to services like POS tools to accept BIP21 QR codes so you can pay businesses or websites.

As this is a welcomed improvement and eliminates the need to speak about the base chain or Lightning and simply bitcoin, I think it’s a no-brainer for wallets, exchanges, and service providers to include.

As is the case with everything in bitcoin, when you add a feature, you have to consider the resources it requires to run smoothly. It’s not about adding a UX improvement. It’s about abstracting away a user activity, which means that action has to be handled somewhere else.

Unified QR codes hold additional data, meaning they can become large enough to cause scanning difficulties with some devices. This is a valid concern. BOLT 11 invoices alone also have scan-ability issues on some devices, while improvements to BOLT12 offers can significantly reduce the size of the QR code.

A method to bypass these issues is using techniques like animated QR codes or bitcoin enabled NFC devices that could hold more data to help avoid scanning problems.

As mentioned earlier there are several wallets with partial BIP21 support such as Blixt, Blue Wallet, Breez (find the full list at Bitocin QR dev), and more are coming.

Cash App announced at the Miami Bitcoin conference that it was looking to expand its “Lightning Network (LN) Receives” with a seamless Bitcoin UX experience using BIP21. Once released, cash app users will be able to generate QR codes that combine both Lightning Network invoices and on-chain information.

This new QR address standard makes the process easier for Cash App users to pay one another or be interoperable with other bitcoin wallets, both base chain and lightning enabled.

Cash App has already allowed LN payments since January but wants to make their “Bitcoin” experience a unified one, a goal I think more wallets will have to take, should they want to service the casual market.

South African bitcoin pleb falling down the rabbit hole and willing to share every bump, scratch and knock along the way
View more articles from this author
PrevPreviousHow To Curb Email Spam With Bitcoin
NextHow Is Bitcoin Secured?Next